Ever wondered why would the IMF (and reportedly the EU Commission) reject the proposed (Plan B) Cypriot Government raid on state pensions funds? Oh... ok... IMF review from November 2011: 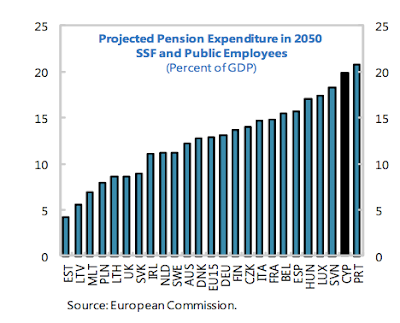 And the very same IMF note also sheds some light on those 'oligarchs' deposits that are so vast, the entire EU is apparently chocking on chicken breasts at Herman von Frompuy's dinners:

"First, non-resident deposits (NRD) in Cypriot banks (excluding deposits raised  abroad by foreign affiliates) are €23 billion (125 percent of GDP), most of which are  short-term at low interest rates [note: ECB official data does not exclude foreign affiliates deposits, which are normally out of touch in levy imposition. Also note: much of bulls**t about Russian oligarchs deposits was about high interest rates allegedly collected by them on Cyprus deposits. Guess that wasn't really the case as chart below confirms: deposit rates decline sharply by nationality grouping for both corporates and individuals... so who was exactly earning 'high returns' on Cypriot deposits? oh, well... Cypriots...]. 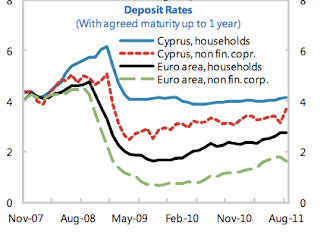 "These could prove unstable in the event of  further confidence shocks. [In other words, Cyprus requires very stringent capital controls if it is to avoid instantaneous bankruptcy even with ELA continuing]

"This risk is partly mitigated by the 70 percent liquid asset requirement against the €12 billion in NRD in foreign currency), and the 20 percent requirement for the €11 billion in euro-denominated NRD). [Wow, so apparently 'oligarchs' deposits carry massive safety cushions, whilst 'ordinary' depositors are not...]

"Second, €17 billion in deposits collected in the Greek branches of the three largest Cypriot-owned banks could be subject to outflows in response to difficult conditions in Greece. Outflows in the first half of 2011 were close to €3 billion (nearly 15 percent of the total), although a portion of these returned to the Cypriot parents as NRD. [Now, there was more of Greek money than 'oligarchs'?] 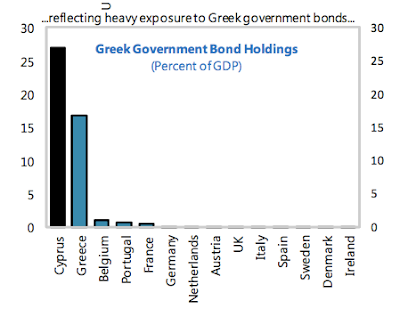 Clearly, structuring PSI the EU authorities & IMF knew the above factoid, right? Just as they knew the following (which clearly highlights the fact that any substantial hit on Cypriot banks would have immediately spelled insolvency of the entire economy): 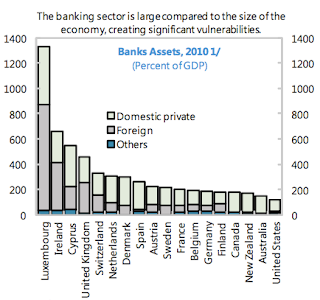 Posted by TrueEconomics at 6:59 PM

you can buy spiderman towels in Cyprus still.
in the mean time, the debasement of paper money continues.