Here are some comparatives relating to un- and under-employment between the current crisis and the dreaded 1980s malaise summarised in a chart : 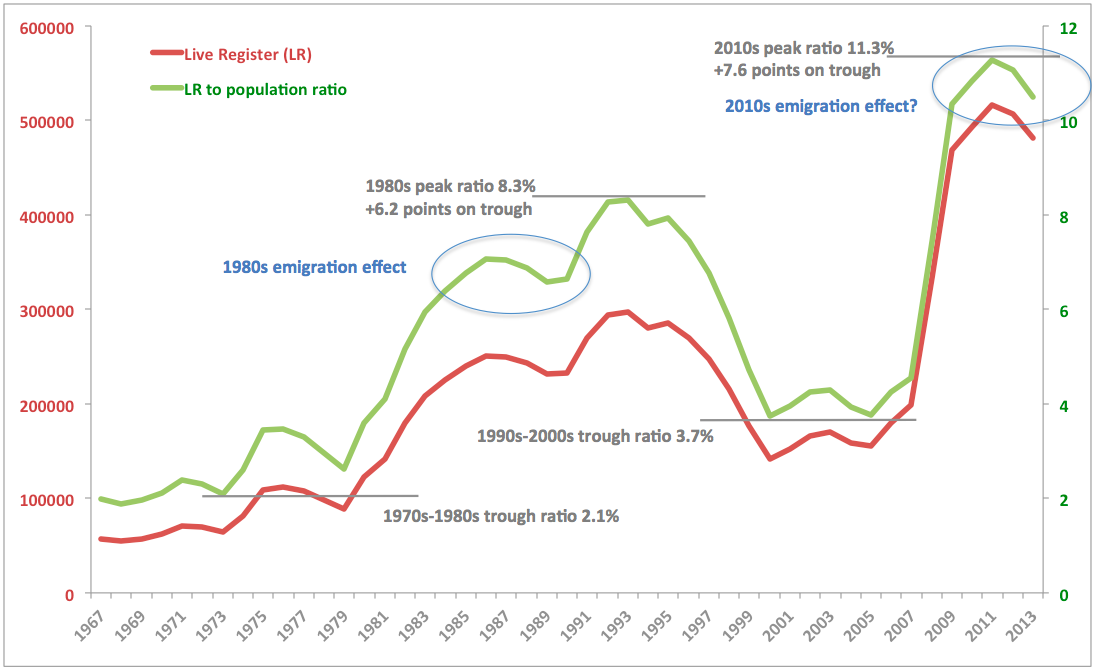 Remember, Ireland today is not Ireland in the 1980s...
Posted by TrueEconomics at 9:10 PM

The thing that is worth emphasizing from the graph, is that the 'change' from the peak of the 1980s and early 1990s, was not organic in nature. It would look a lot more reassuring, if there had been a slower, more organic improvement over a longer period. In fact, what actually happened was that heading in towards the 1997 general election (around the time that the so-called 'rainbow coalition' was in government), the situation for employment in Ireland changed very suddenly and very dramatically.

As late as the mid 1990s in Ireland, a large part of the young population in cities like Dublin were being regularly pulled over to 'boom towns' such as Berlin in Germany, in order to gain employment. By the year 2000, that trend had sort of reversed itself. It was all about cities in Ireland, such as Dublin and others, trying to accommodate massive inflows of population (and into that context we have to place the real estate and credit banking boom that happened).

There had been virtually no infrastructure been built throughout the 1980s and 1990s to accommodate even a young population remaining in Ireland - never mind, a very large incoming population arriving into the country. As a consequence, the government that entered into office in 1997 had to set about focusing on building construction (because we literally had no place to put people who were then needed to fill jobs positions). While the 'rainbow coalition' before 1997, can take create for growing the economy in general, they cannot take any credit for having projected the pressures on housing in Irish cities and towns, and ramping up production of the same.

These are subtle points that are difficult to recall now (because cities like Dublin were such different places, at the time of the early and mid 1990s, compared to what they turned into later). Unfortunately, I think that points like these might be missed in a future banking inquiry.

The other point worth emphasizing in the graph, is looking at the period between the early 2000's and 2007. I know that the graph demonstrates low unemployed or under-employed level between the early 2000's and 2007. But actually, what you had in certain areas of Ireland, such as Dublin city in that period,... was that businesses were unable to find workers (there was huge competition between companies for good employees). We reached a point in the early to mid 2000's in Ireland then, where the economy was getting starved of the necessary human resources that it needed in order to continue to thrive.

We should try to bear this in mind perhaps. Because the globe in total has experienced one of the worst 'shocks' that many people have known in living memory. The demand in the global market is not what it was several years ago. But we should remember, that when growth is much stronger in the economy abroad, what does tend to happen in Ireland, is that our economy can get starved of a workforce.

(Notwithstanding the fact, that if workers do risk re-locating to Ireland, and undertake these very large banking mortgages on themselves, or excruciating rents,... that if the global economy shudders again,.... workers tend to get fatally trapped on the island of Ireland, and find themselves facing a very bad reality, and that can happen far too quickly)

The fact is that, there isn't a strong enough domestic demand on the island of Ireland to support large portions of the 'workforce' through the worst conditions that can persist in markets globally. And the other side of the coin is, is that very quickly in Ireland, if conditions of the global economy do improve,... Ireland's economic growth can get perilously stunted, owing to lack of enough access to a quality and quantity of workers.

This is witnessed very much by this phenomenon that we see in Ireland, of the 'Irish in London, back in Dublin'. That was a kind of a joke in the early 1990's in Dublin, where some of the Irish who had hopped across the water to Great Britain, began to toy with an idea of re-settling back again to Ireland on a semi-long term basis to provide the workers needed within the Irish economy.

These people form a large part of the Irish workforce right to this day.

The one other point that is worth emphasizing about the graph now, is actually a quite worrying point. What happened in Ireland, between the early 2000's and 2007, was that the Irish economy overheated itself.

What happened was that there was chronic levels of competition for workers and labour in centers like Dublin city. This might have had a 'feel good' factor. But what it translates into in reality, is that a lot of companies can take on workers very hurriedly and without much of a chance to build up that workforce organically.

In my own experience, I recall that our company employed a couple of hundred people, many of whom had been 'rapid hires'. You kind of took on people as a contingency. You took on labour, in case you might need it.

Towards the later part of the 2000's, I had realized that the company I was working in, had developed a 'shadow' workforce. A team of about a dozen or so individuals, who were carrying out more work, than several dozens of Irish workers who had been with the company much longer. Effectively what was happening, was the company was gearing up, to operate itself in a way that was much leaner and more productive, than the manner in which it had operated for most of the boom times.

The thing was though, that up until 2007 and 2008, the couple of hundred employees in the original (non-shadow) company, couldn't see the 'shadow' part. They could not see the train, which was coming towards them. All of the bulk of the company workforce had been hired in the boom, and the management of that workforce was typical boom-time kind of stuff (the over competition for a work forces that happened in Ireland, because the economy was over-heating and starved of a workforce).

It gets back to this earlier point that I made about the exaggeration of the turns in fortune for employment on the island of Ireland. We don't see any gradual, organic movements. Instead, what we tend to see are these very aggressive turns of fortune.

There is a entire book that could be written about enterprise and employment, that tells the story behind the very strange 'upturn' in the graph as shown.

It is unfortunate in terms of the wider Irish economy, at an aggregate level. But at the level any individual (who volunteered their labour in Ireland during the 'boom'), it becomes even more damaging.

These individuals, as economic units, aren't set up to deal with these very rapid turns and changes in fortune. Whether a recession lasts one year instead of two years, or three years instead of two years, does matter a great deal. Because the graph rose so suddenly and so steeply in 2007,... it means that in order to bring that graph back down to normality again,... does really take a lot longer than it should do. Much too long that is, for individuals.