There is much to be analysed in the Irish Retail Sales figures for January-April 2014, updated by the CSO this week. And I intend to do so on this pages at a later time.

But one thing jumps out: taking data for Q2 2014 to-date (in other words, looking at April performance), and comparing this against all previous Q2 data (monthly averages for April-June) gives a bit of a shocker: 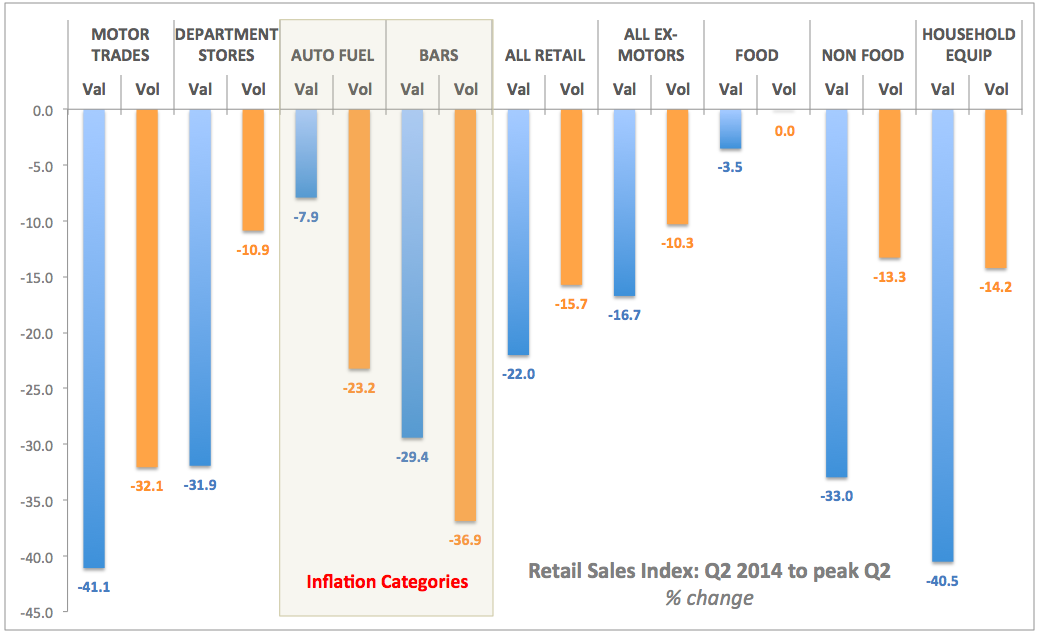 Per chart above, since the onset of the crisis (from the peak) through today, both values of retail sales and volumes of retail sales have declined. With exception of food, these declines have been pretty sharp and despite some improvements in recent months, they remain sharp.

But, in all cases, across all broad categories of goods traded, retail sales have fallen more by value than by volume. This means that retailers have been selling less in terms of actual volumes of goods, but are receiving even less in terms of revenues for these goods sold. Of course this means two things:


Yet, two segments of goods stand out from this picture: Bars and Automotive Fuel. In both, value of sales declined less than volume. In other words, less is being charged for these goods, but even less is being supplied. That is a signifier of rising cost of provision of same goods at retail level - or in plain terms - real, actual inflation. Now, both sub-categories are witnessing two sub-trends:
In other words, the chart above shows that in Irish economy, the inflation tax is being forced through heavily taxed sectors where the State extracts the lion's share of final cost of goods supplied to consumers.

The above also puts under serious questions the bars industry lobby claims that there is a need for high level minimum pricing on alcohol. Their sector, it appears, has been hit by a drop in demand and not by a drop in prices. In fact, if anything, ceteris paribus, their sector might benefit from lower prices - charging punters 7 quid per pint of domestic beer is not a good way to improve your sales, you know...

Posted by TrueEconomics at 6:12 PM