This week, the ECB has sent a barrage of signals. Blanket-bombing the Forex markets, Super Mario laid it thick with the promises. Behind this there is less of the classical monetary policy and more of the classical exchange rates expectations balancing. Inflation is low, for sure. Euro is stubbornly stuck in the highs, for sure. The former is just fine for retirement-bound Germany. The latter is not fine for growth centres-bound BMWs and Mercs. So the majority of the Governing Council decided to move… but only in the future… and only once new forecasts are made available.

Basically, Draghi pre-committed to acting in June to ease policy. This is not the same as a promise of QE, neither in the form of actual printing or unconventional measures of any serious significance. Instead, my expectation is the ECB will pass through another refinancing rate cut or do some re-arranging on liquidity support measures side (maturity or volume or both). The Governing Council can then sit back and watch if the marginal move induces downward pressure on the euro. This being June, real economy in Europe will be heading into Summer, buying ECB some time for navel gazing.

Most likely outcome: as long as ECB does not drastically depart from the Fed and BofE, things will remain hard for the euro.

The ECB stance overlays the fundamentals that are consistent with medium-term low inflation and anaemic, albeit improving, growth (see http://trueeconomics.blogspot.ie/2014/05/752014-eurocoin-leading-indicator-april.html). Any easing the monetary policy from here on is therefore consistent with ECB responding to deflationary pressures and Forex pressures, and not to the issues relating to fragmented lending markets. Thus, any easing in June remains conditional on ECB forecasts. Draghi noted as much, stating that

The ECB still appears to be undecided on specific tools that it is going to use. Much of this indecision is probably down to the difficulties with structuring some less conventional measures. Much is due to the uncertainty as to how much easing will be required. Intervention for Forex sake will have to be initially smaller than intervention aimed at unlocking fragmented lending markets. This is my expectation for any June action, if any were to take place: symbolic act to alter forward expectations and buy time before end of summer.

The tool kit for this includes potential

I suspect ECB will not go for negative rates, or opt for the outright non-sterilsation of SMP, albeit it can slow down the rate of sterilisation. Negative rates is a nuclear option that will have more significant impact on reducing euro strength. And it might add credit supply in the euro area on the aggregate, though I doubt this will have much of an effect on breaking the vicious cycle of market fragmentation (I find it unlikely that negative rates can trigger restart of credit supply in euro area impaired economies).

In the longer term, I suspect ECB is going to take a wait-and-watch approach through summer. If economic growth continues to pick up and inflation starts to rise, we shall see ECB abandoning any further action beyond the token signalling in June. If things deteriorate over the summer, ECB will look into more QE-focused policies in September-October. Corporate bonds purchases might be on the books then. 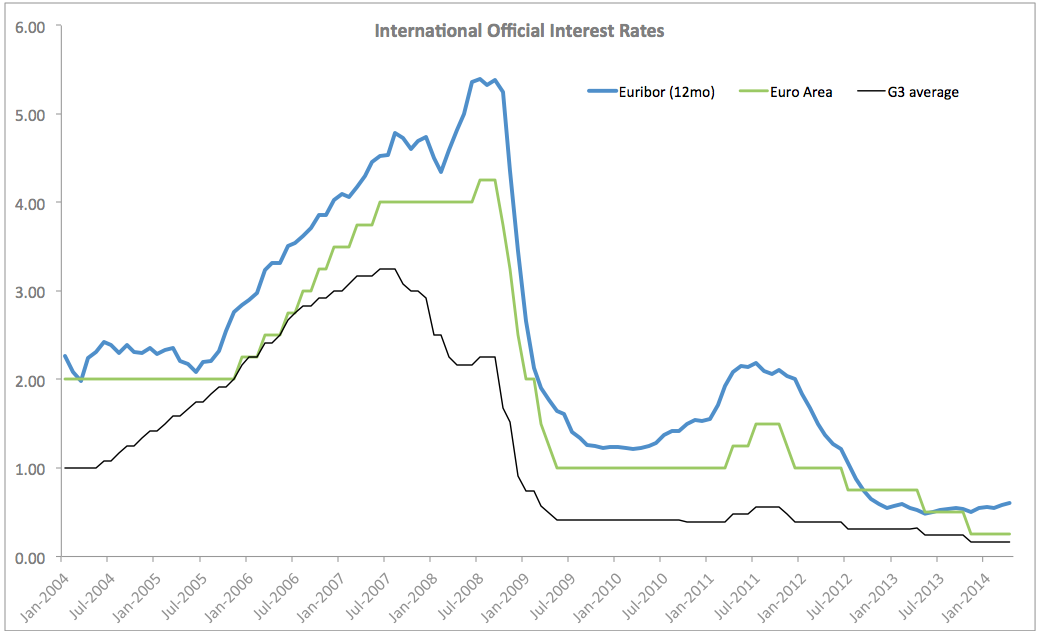 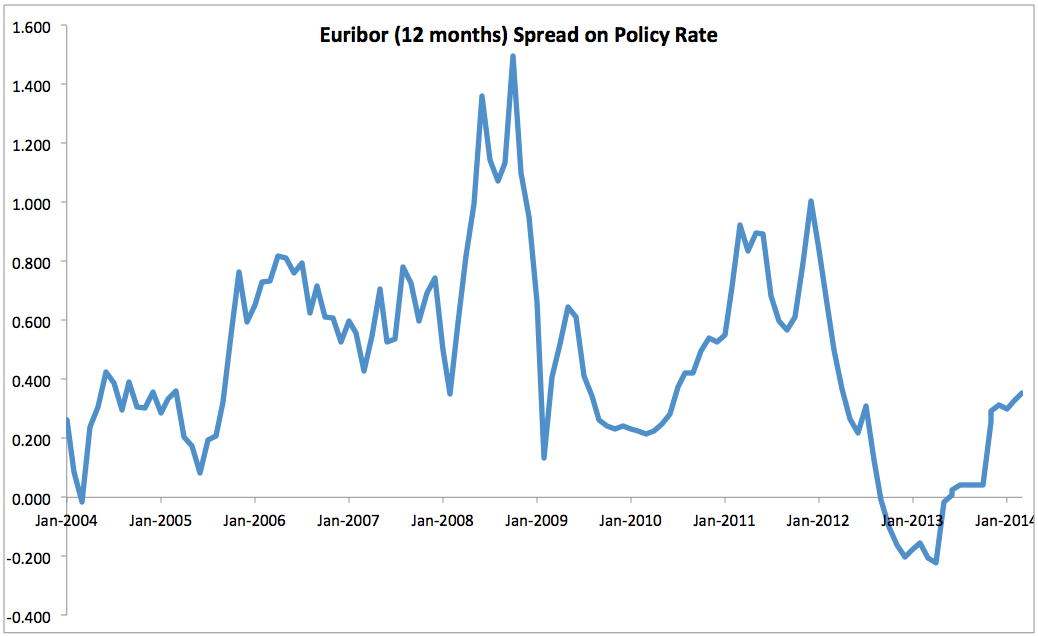 Meanwhile, the euribor-ECB spread rose to the highest level since April 2012... The Draghi Put period average spread is at 0.054, pre-Put at 0.594 and current spread is at 0.354. The cost margin in inter-bank markets is now closer to the crisis peak averages than to the Draghi Put average, showing the effects of LTROs and ECB easing wearing out.

And duration and magnitude of deviation from historical averages are frightening: 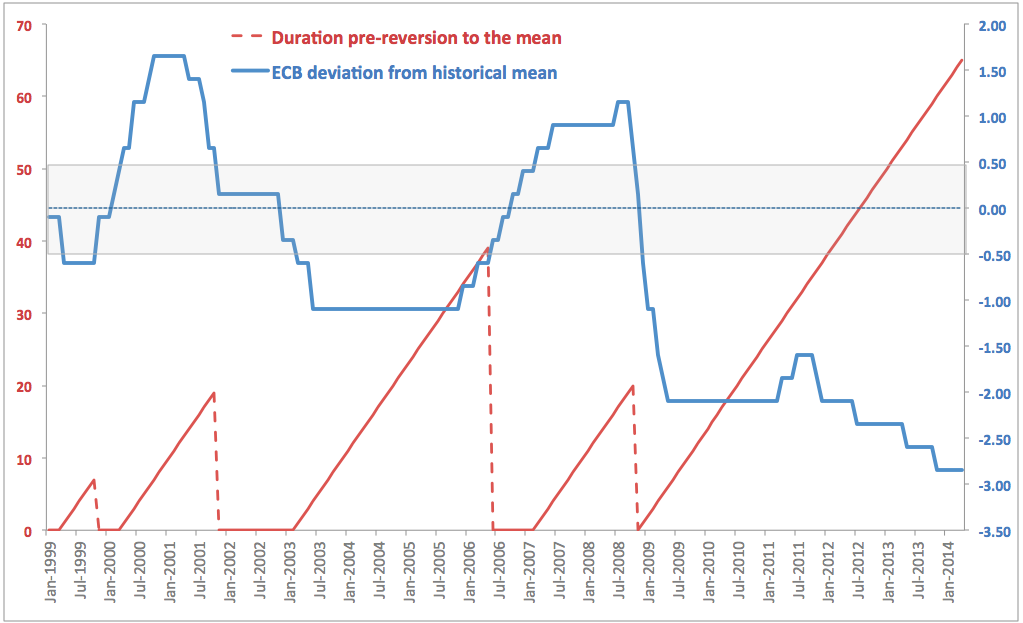 All of which shows that ECB will have to seriously push the bounds on unconventional measures, if it really wants to make a dent in the pile of problems (forex rates, fragmentation, aggregate liquidity supply, inflation, growth...) the ECB is facing.

Posted by TrueEconomics at 12:06 AM