Ireland's external balance performance has always been a major point for departure in analysis of our economic growth, sustainability of our debt and overall consideration of our economic infrastructure quality. As a Small Open economy, Ireland is trade-intensive. As an MNCs-led economy, Ireland is even more trade-dependent, in so far as we need larger external surplus to deliver same jobs creation as other European economies with smaller MNCs-induced GDP/GNP gap.

Since the start of the crisis, Irish current account performance was invariably brought forward as evidence of significant improvements in the underlying economy's competitiveness. And our gains were pretty strong - judging by this metric:

The question is, of course, are the above numbers really strong, as in exceptionally strong or very strong as judged by comparison with other similar economies?


Here's a chart illustrating this performance - for legibility, I only left in the chart Small Open Economies. 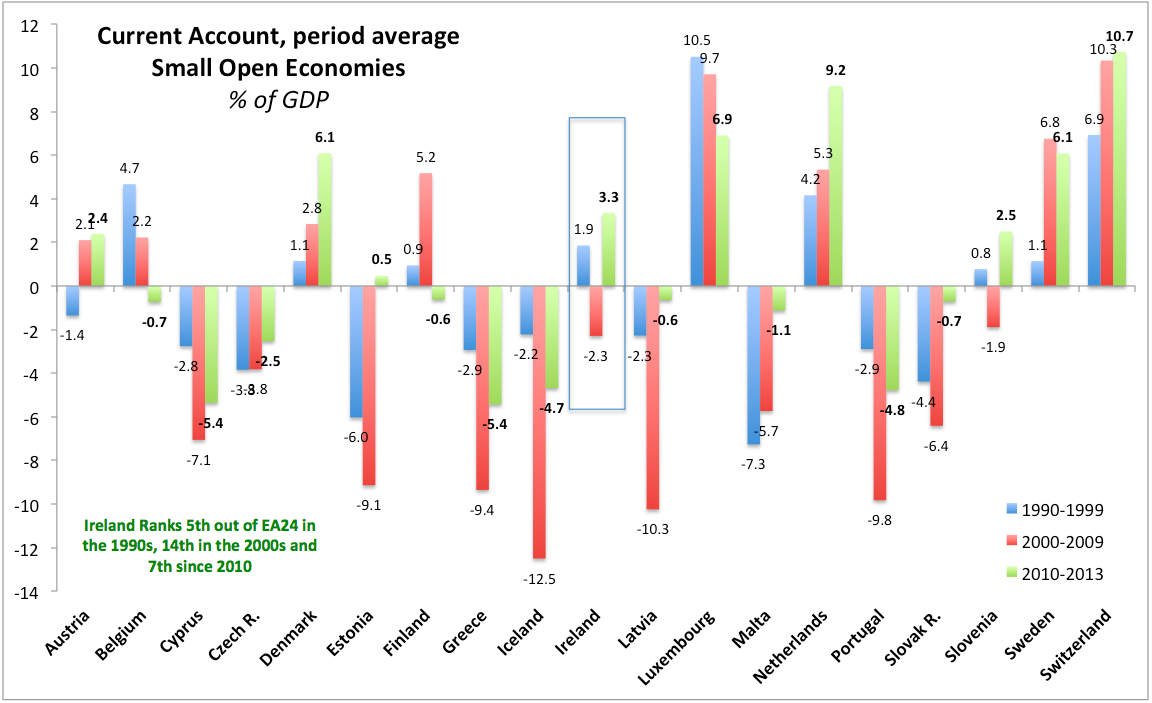 But what about the overall period of the crisis, you might ask?

Instead of decades-averages, let's take a look at the average current account balances over 2008-2013 period. Here we rank 8th in the EEA24 with our current account surplus averaging 5.4% of GDP. 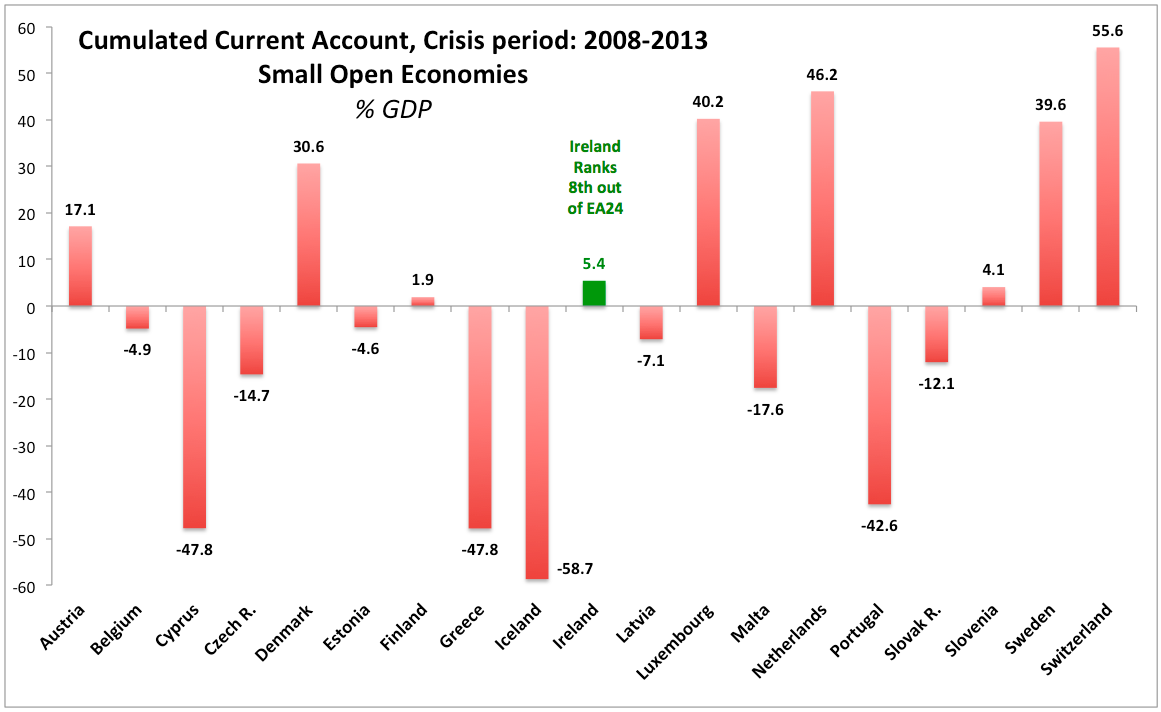 The key point here is that Ireland's current account performance has been strong, but it has not been exceptional. Certainly not exceptional given the need of this economy for deleveraging (and associated requirement for higher current account surpluses).

In fact, non-euro EEA24 members are in a vastly stronger current account position than their euro area counterparts, but that is probably a matter best covered separately, although it does probably explain why euro area needs ESM and other means for borrowing externally.

Lastly, however, let's come back to that 'swing' in our current account from deficits in the 2000s to surplus in 2010-2013. Remember, the swing was a sizeable 5.64% of GDP. But it only ranks us as 5th economy in the EEA24 in terms of the magnitude of improvement in our competitiveness. Not exactly an 'exceptional case' either.

Posted by TrueEconomics at 10:13 PM

Why did Europe, a region torn by strife and suffering and economic collapse after the fall of the Roman Empire, become the birthplace of modern economic growth? These two questions are at the forefront of research in economic history and important elements of public discussions. This book answers both questions with a new explanation for the distinctive patterns of economic change in China and Europe. As specialists on these two regions of the world, we make specific comparisons of similar processes. We pose, whenever possible, falsifiable propositions so that our explanations of particular phenomena can be challenged, qualified or confirmed by future research. We begin with a review of some conventional arguments offered for both China’s failures and Europe’s successes. Some of these we reject based on their inability to explain known facts. Others we accept but place into a larger framework of explanation that allies price theory and political economy. We contend that this approach provides a more satisfying discussion of the issues and formulates better answers to the big questions than do the conventional narratives. Our collaboration suggests that the alliance of economic theory with expertise in the history of both China and Europe makes for better economic history.
http://economicsuggestion.blogspot.com/