This is an unedited version of my article for Sunday Times, April 06.


From jobs programmes aiming to boost employment creation to entrepreneurship strategies and to solemn promises to unlock credit supply and investment for indigenous innovation-based enterprises, Irish SMEs have been basked in the public policy sunshine.

Much of this attention is cross-linked to another public policy fad, Ireland’s long-running obsession with innovation and R&D. In 2013, amidst continued borrowing for day-to-day operations from the Troika, Irish State spent EUR773 million on supporting research and development activities in academia and industry. Of this, a good portion was targeted to fund R&D and other innovation activities linked to Irish indigenous SMEs.

There are three basic problems with all this policies activism. One, we have no idea as to what sort of financial returns this public investment generates to the taxpayers. Two, we have virtually no coherent and independently verified evidence that the innovation-focused SMEs are delivering any serious economic returns in terms of real jobs creation and income generation. Three, we have no proof the state-funded innovation is a right model for SMEs growth generation in the first place.


Enterprise innovation is a weak spot for Ireland. Indigenous patent applications reported in July last year by the Patents Office and covering full year 2012 stand at decades low. Monthly data from the New Morning IP – an Irish consultancy dealing with issues of intellectual property – shows that in 2013 indigenous patents applications fell even further, down by almost 3 percent year on year.

Back in 2006, the national strategy for science set 2013 as the target date to deliver a 'world class knowledge economy'. Since then, numbers of indigenous patents filed under the Cooperation Treaty and to the European Patent Office have declined.

And the problem reaches beyond our SMEs. For example, per IDA own figures, only 28 percent of agency clients have spent more than EUR100,000 per annum on R&D. In other words, nearly three out of four MNCs had, de facto, nil research activity here.

The university sector is the cornerstone of Irish Government's vision for delivering an innovation-focused SMEs culture. Sadly, our best universities are barely visible on the radar of international rankings. Ireland’s top university currently ranks only 61st in the QS Top University league table and 129th in the Times Higher Education (THE) rankings. Trinity ranks 55th in Arts & Humanities – an area that receives absolutely zero attention from the likes of IDA and Enterprise Ireland and is firmly placed outside our economic development policy umbrella. TCD ranks 81st in engineering and technology, 83rd in life sciences and medicine and 136th in natural sciences. All of these areas are focal points for R&D spending and feed into state enterprise supports systems. UCD is no better: ranked 139th in the world under QS criteria and 161st by the THE rankings.

By pretty much every possible metric, our innovation engines are not firing.


Meanwhile, enterprise formation, an area that should be a core priority for the Government that is allegedly focusing on entrepreneurship and jobs creation, is lagging. Irish start-ups rates, relative to the economy size, are low today and have been low even in the days prior to the Great Recession.

Based on the OECD statistics, despite years of booming ICT services and substantial growth in the IFSC, Ireland today shows relatively static number of enterprises trading in market services, and declines in the number of enterprises working in manufacturing and industries, excluding the construction sector.

Late last year, OECD published its Economic Survey of Ireland. The document recommended empirically founded approach to enterprise and innovation supports. OECD noted that over-proliferation of funding agencies and programmes is yet to be scaled back. Per OECD, Ireland has over 170 "separate budget lines… and 11 major funding agencies involved in disbursing the Science Budget". Meanwhile, the Government continues to add new ones, seemingly with little regard for their effectiveness. Not surprisingly, there is no evidence on systematic and independent evaluation of these programmes effectiveness. And there are no continuously reported return metrics relating to state investments in enterprise development and innovation.

Instead of real statistics, often misleading and highly aggregate numbers are being put forward as markers of success. Jobs commitments and gross jobs additions are presented as signifiers of major breakthroughs, without independent audits. Companies’ registrations rates are reported as being equivalent to start up rates and no central data reporting is provided for actual enterprise formation. Take for example a jump reported in new companies registrations in Q1 2014 when 10,741 new companies were entered into the register, marking a 6% rise year on year. This number included 3,989 limited companies - the third highest rate of new limited companies registrations for the first quarter over the last 10 years.

Sadly, these headline statistics tell us preciously little about the underlying dynamics of companies formation. For example, how many business restructurings completed in 2012-2013 are now leading to companies re-registrations? How many of the businesses launched in previous years survive? How many of businesses launched are actively trading in the real economy? We simply do not know.

Focus on top-line reporting metrics, such as aggregate numbers of companies registered, VC funds disbursed, R&D budgets spent, obscures the woeful lack of coherent policies supporting indigenous enterprises formation and growth. As the result, beyond the areas of ICT services, biotech and medical devices, we neither foster formation of micro enterprises nor help smaller companies to reach 'medium' size. And, via tax and compliance measures, we actively penalize self-employment – the source of much of the early-stage entrepreneurship.


Promoting real innovation and enterprise cultures requires supporting investment ecosystem and entrepreneurial risk-taking. These goals can only be achieved by lower taxation, especially via lower CGT and income tax, and a benign and highly efficient personal and business insolvency regime. These are not priority areas for the Government.

However, tax policies mix is a necessary, but not a sufficient condition for success. To further promote real enterprise growth, we need to stop fetishising scientific R&D-driven enterprises and ICT and refocus public funding toward more evidence-based enterprise development projects.

International research shows that ordinary and traditional sectors SMEs drive growth in jobs and income. Where traditional sectors are put onto exporting paths, these SMEs can drive exports growth as well. In contrast, high performance start-ups in ICT services, usually focused directly on exports markets, are less employment and income-intensive. ICT does contribute strongly to productivity growth and is a nice niche business to have on offer for investors, but as McKinsey recent research pointed out, tech innovation business is unlikely to fulfill the economy-wide hunger for jobs, especially jobs for the indigenous workforce.

Focusing on active training for entrepreneurship and mentoring of new companies is another necessary addition to the policies mix that is currently being sidelined in favour of populist drive for state investment and R&D funding. One key area where we are lacking in supports is access for entrepreneurs to legal, tax and financial advice. Costs of tax and legal compliance and structuring are unbearably high for younger companies and for smaller enterprises considering growth strategies. These costs crowd out funding available to companies to finance further development, hiring, as well as cap companies growth potential.

On investment side, we have a thriving culture of VCs chasing the 'next Facebook'. Over 90 percent of all VC funding extended in Ireland goes to finance ICT start-ups, with more than two-thirds of this going to ICT services companies, as opposed to physical technologies.  We also have over 75 incubators and accelerators, with the vast majority of these being state-owned and/or state-funded. These too focus almost exclusively on companies working in ICT, biotech and other lab-linked innovation sectors.

But we have no idea as to the effectiveness of this strategy. Numbers employed in core ‘knowledge economy’ sectors have grown by about 4,900 from the onset of the crisis through 2013. All of this growth was down solely to ICT jobs which added 9,125 new employees, while professional, scientific, and technical activities employment, excluding education sector, is down 4,225 on 2008. Adding up jobs creation reported by the MNCs from 2008 through present, it is highly likely that indigenous employment in professional, scientific, technical, and information and communication sectors has probably shrunk.

Looking at the overall landscape of enterprise formation here, we do know that with exception of Ryanair, CRH, Paddy Power and a handful of other flagship companies, no Irish SME has grown beyond the 'medium' level threshold. The magic target of exceeding EUR20 million in annual sales - set in the Enterprise Ireland 2005-2007 strategy plan has vanished, unmet.

Put simply, Irish indigenous companies are not getting smarter with billions of public funds invested in SMEs-targeting R&D activities and ventures over the years. At the same time, Irish SMEs are not growing in size either. Micro enterprises show some progression toward becoming small firms, but small firms show little dynamism upward and medium-sized companies are stuck with no capacity to break into the big firms league. The system is broken and incremental policy adjustments are not holding a promise of a solution. We need to go back to the drawing table on enterprise policy in Ireland. 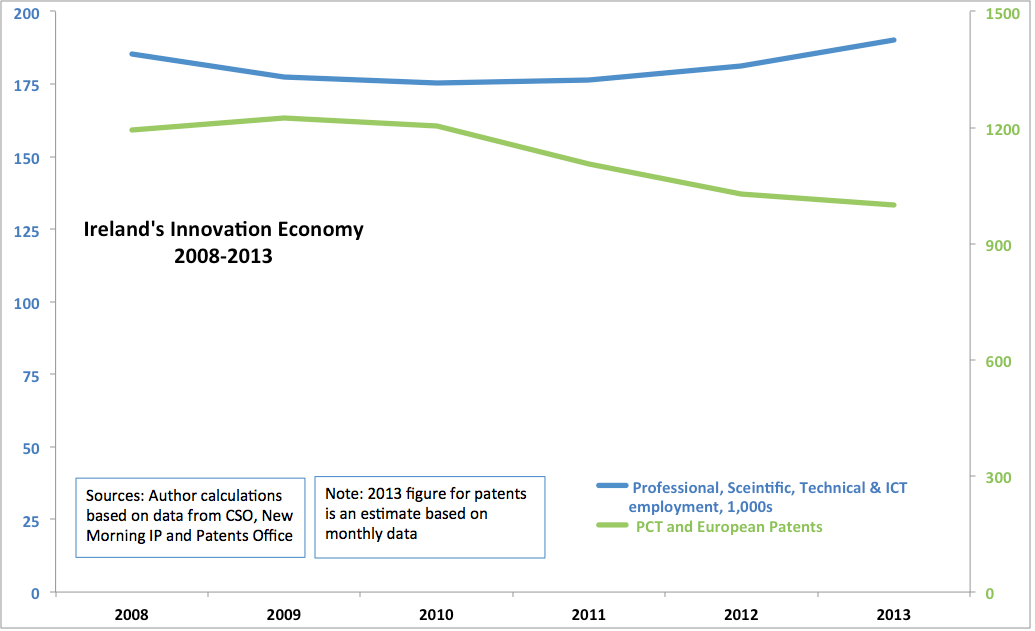 Recent research from the US, published by the National Bureau for Economic Research looked into sell-side equity analysts' ability to predict equity prices and the impact their predictions have on market valuations over the period of 1983-2011. Controlling for a wide variety of factors that routinely influence forecast errors, the study has found that at the times of the crises sell-side analysts forecasting accuracy deteriorates by up to 50 percent relative to normal. And just as analysts’ errors explode, their influence rises as well. In particular, forecasts that upgrade outlook for companies amidst the falling market tend to carry the greatest weight of public attention. Optimism pays, even if only for analysts’ employers. Which, of course, creates a powerful incentive for sell-siders to ‘talk up’ equities just around the time of the worst bear market. Lastly, the study found that at the time of financial crises, marketing efforts by sell-side analysts tend to increase, in part due to greater pressure on them to perform, in part due to expanded opportunities for being ‘heard’ by investors.

John Kenneth Galbraith thought that "The conventional view serves to protect us from the painful job of thinking." In the case of sell-side analysts musings on the crises, that might be not a bad alternative.

Posted by TrueEconomics at 9:55 AM