The field (dating to Jurassic deposits) was discovered 45 years ago back in 1968 by an accident, the field is currently being developed by a number of companies, including a partnership between Rosneft and ExxonMobil, and Salym Petroleum - a JV between Shell and Gazprom Neft.

So far, reported recoverable reserves are officially booked at 3.5 billion barrels (500 million metric tonnes). Official estimates are for daily yields of 1-2 million barrels per day by the end of this decade. For comparative, US North Dakota aims to reach production levels of 1.2 million barrels per day by 2015 - this is the largest US shale oil play at this time. Its biggest field - Bakken - is small comapred to Bazhenov (see here one older report: http://www.forbes.com/sites/christopherhelman/2012/06/04/bakken-bazhenov-shale-oil/ and an FT report on same: http://www.ft.com/intl/cms/s/0/17e0e3d0-25c6-11e3-aee8-00144feab7de.html#axzz32YDYxj72).

At the upper end of this estimate, Bazhnov field pushes to 4 times Saudi Arabia's oil reserves or roughly 30 years of world supply at current demand levels. This is why IEA considers Bazhenov field as the world's largest source of shale. Of course, Russia is already producing more oil than Saudi Arabia with daily production of 10.3 million barrels per day and Russian most productive fields - those of West Siberia, like Salym group, are declining, with production dropping at an average of 2% annually. 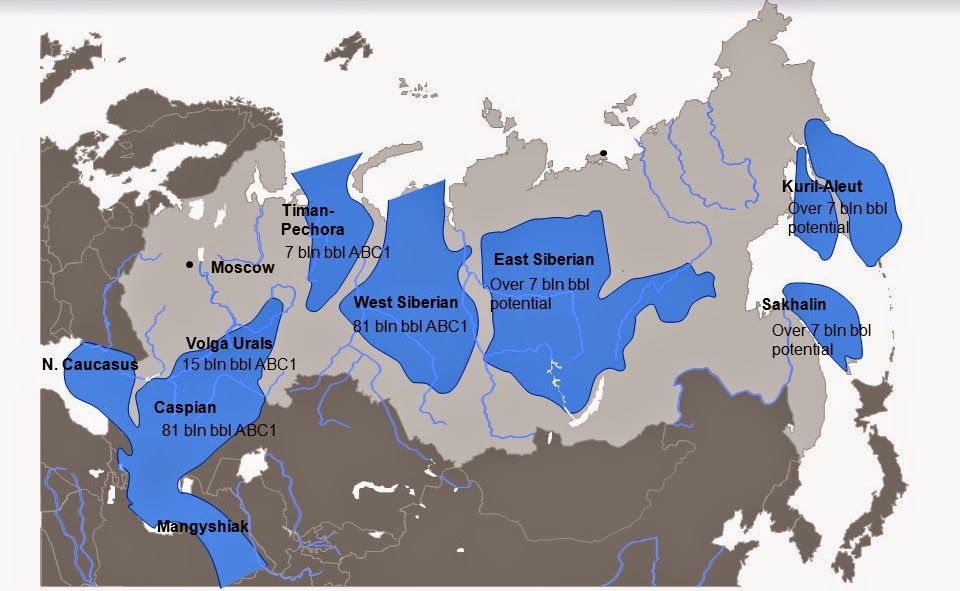 But back to the Russia-China gas deal... there is huge legacy infrastructure network linking Europe with Western Siberian basin, and virtually no networks linking it to the Asia-Pacific. With the gas agreement signed this week, this is about to start changing. Which means that the gas deal will promise to wire shale oil and gas reserves of the entire Siberia into the massive AP markets, providing two key deliverables for Russia:


Europe also wins, as the second point above will help contain energy price inflation in the EU as North Sea production declines in decades ahead.

The point that is being missed on the Russia-China deal by many analysts is that, politics aside, Russia will benefit from a massive shifting of economic activity East - to the regions rich in resources and starving of infrastructure to develop them. With this shift, Russian social development also will gain - the sparsely populated expanses of Eastern Siberia can do with the population growth that can happen on foot of large and sustained capex uplift.