All you need to know about today's QNA data release (though it won't deter me from more detailed analysis later) is: 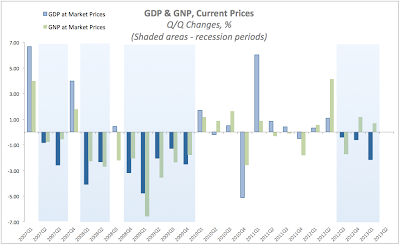 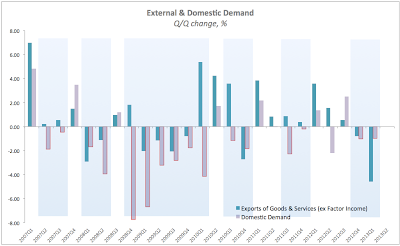 Incidentally, just in case you felt like previous 'expansion' (officially from Q1 2010 through Q2 2012) was not much of an expansion at all, then you live in the world we inhabit, closely related to the Gross Domestic Demand. If you felt things were just fine then, you might live in Australia, or read too much of the Department of Finance presentations on their web site, or... I have no idea...

As I commented on earlier post by Brian Lucey: That light at the end of the tunnel did turn out to be an incoming train...

Update: Meanwhile, Minister Noonan thinks that the above (3 consecutive quarters of contraction in the economy, official fourth dip in the Great Recession and 6th dip in Total Domestic Demand) is "certainly disappointing but it's one set of statistics" (link). How long till Enda pops up to greet us with Dude's famous return: http://www.youtube.com/watch?v=QsogswrH6ck

Posted by TrueEconomics at 8:46 PM

Coupled with the fact that in the last 5 years our national debt has gone from 65 Billion to 170 Billion and rising, with 260000 mortgages underwater, plus a new code of conduct to facilitate repossessions, i can't stop laughing/crying when they say house prices are rising again...