Having looked at the recession/expansion dynamics in Irish economy on foot of Q1 2013 figures (here),  the dynamics in GDP and GNP in Ireland at the aggregate levels (here), and the mythology of the 'exports-led recovery' (here), let's round up the Q1 2013 QNA cover with a look at the expenditure-lined components of the GNP and GDP.

Below we look at the Seasonally-adjusted Current Market Prices data. 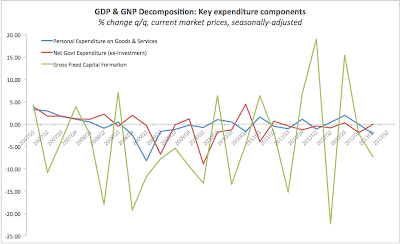 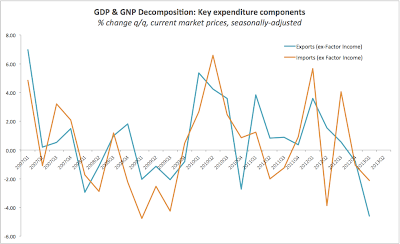 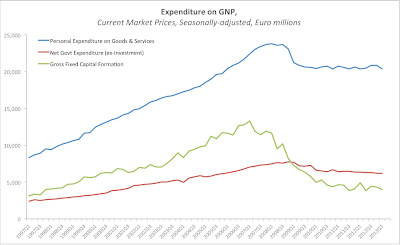 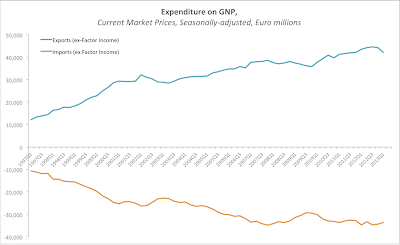 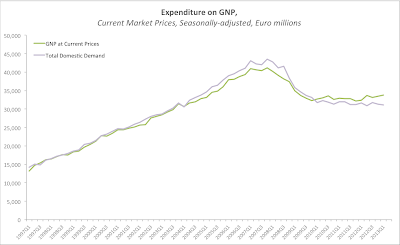 To summarise, not a single line of expenditure posted an increase in the Q1 2013 in terms of q/q changes once seasonal adjustments are taken into the account. In other words, the sole positive improvement in the numbers - relating to GNP - was driven exclusively by reduced outflow of funds from MNCs.

Worse, not a single line in the determination of the GDP in Ireland was up in q/q terms in any quarter since the end of Q3 2012. We had, put differently, 6 months of across the board contractions in the economy, when we consider expenditure-based definition of GDP.

Posted by TrueEconomics at 8:22 PM