7/6/2013: Goodish news on capital investment in Ireland in Industry

Given the volatility in capital sales and acquisitions in Ireland, based on quarterly data, it might be premature to say much about the trends for capital investment in 2013 so far, but nonetheless, at least we are having some good news to go along with the sunshine outside.


The main contributors to capital sales were the following sectors:

You can see the data here http://www.cso.ie/en/releasesandpublications/er/cai/capitalassetsinindustryquarter12013/#.UbBltyuglF8 but, as usual, this blog should add some value to the reader. Hence, below is the chart showing Q1 figures for 2011-2013 in terms of net capital acquisitions (new investment) in the industry: 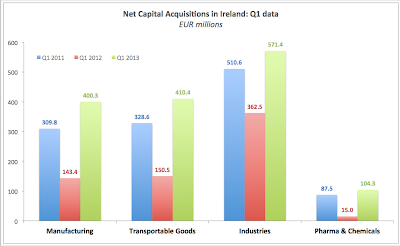 And the good news is (conditioning on the above comment on volatility):
Posted by TrueEconomics at 5:10 PM