Both Fitch and S&P have in the recent past questioned the model of Irish banking sector crisis resolution on the foot of the apparent link between the banks balance sheets and the exchequer.

The report claims that Irish banks' current ratings "are constrained by the significant risks that remain in the Irish banking system. However, support remains an important rating driver and Fitch considers that the Irish authorities' propensity to support the 'pillar' banks, Bank of Ireland (BOI) and Allied Irish Banks, p.l.c. (AIB) remains undiminished, despite the withdrawal of the Irish Bank Eligible Liabilities Guarantee (ELG) in March 2013."

Crucially, "Fitch believes that the pillar banks' performance will continue to track within the stress case scenario of the 2011 Prudential Capital Assessment Reviews (PCAR), however these tests were framed on a Basel II basis. Since then capital expectations of market participants have increased. The 2014 PCAR may revise the stress assumptions and requirements to align more closely with Basel III." The kicker is that the banks will need new capital ('might need' another state injection as opposed to 'will need' capital).

"As Irish banks' capital ratios continue to be eroded and a return to profitability only appears feasible in the longer term, the banks may need to raise additional capital before they can contemplate a future independent of state support", Denzil De Bie, a Director in Fitch's Financial Institutions Group told Reuters.

The old kicker is that assets and capital held by the Irish banks remain weak, "with high NPLs and impairment charges, especially against commercial real estate and residential mortgage loans. Although the rate of deterioration slowed at BOI and AIB in 2012, Fitch believes impairment charges could increase during 2013 and 2014, with arrears reaching a peak in 2014, as the banks accelerate the resolution of mortgage arrears in line with new targets set by the Central Bank of Ireland in March 2013."

"Asset quality is weak in the Irish banks, with NPL ratios of 16%-40% in the Fitch-rated
institutions at end-2012. The banks also report a significant portion of their loan book to be past
due but not impaired." 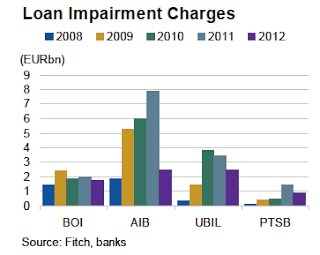 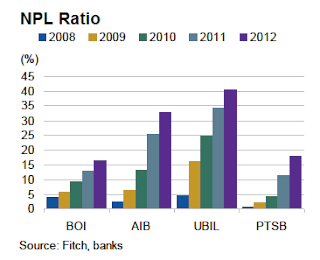 "Underlying pre-provision operating profitability is structurally very weak because of the long-term, very low-yielding mortgage loans in their books. Until rates rise, Fitch considers that a return to sustainability will only be possible as the various restructuring and cost control plans of the banks begin to yield results. Fitch expects a return to operating profitability to be delayed until at least 2015 because of the continued erosion of earnings from high but reducing impairment charges."

Now, recall that per PCAR2011, Irish banks were supposed to fund their full losses out of operating profits starting with 2015. So far, Fitch is not saying there is excess (above PCAR2011 stress test assumptions) level of stress in the system, but Fitch does seem to point to the already recognised two pressure points:
- continued deterioration on the assets quality side, and
- Basel III.

And the banks are still dependent (and will remain for some time to come) on state/central bank supports: "with loan/deposit ratios still at a high 130%-230% in the Fitch-rated banks at end-2012, wholesale, government and European Central Bank funding still forms an important, albeit reducing, component of the Irish banks‟ funding bases." Why? Because deleveraging is by far not complete:

On banks doing their bit to get credit flowing to the economy: 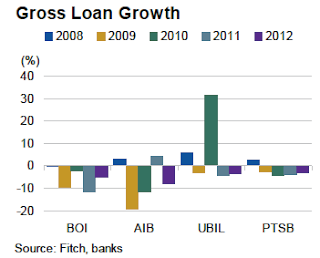 And per stabilisation of deposits: 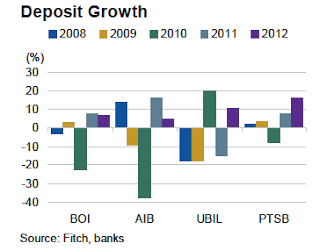 Posted by TrueEconomics at 11:30 PM