Look no further than the latest set of quotes fired off by ECFIN E-news letter: 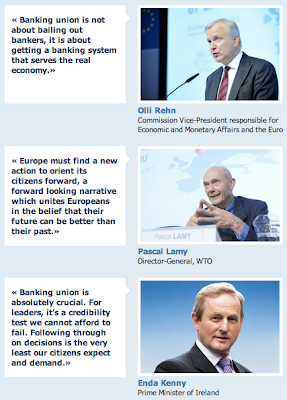 Let's take them through reading.

Mr Rehn says that 'Banking Union is not about bailing banks'. Of course he is right - the EU has bailed out the banks before it conceived the EBU. However, one major objective of the EBU is about systematising future bailouts of the banks, in theory - to restrict taxpayers' expected liabilities in such bailouts, and to regulate future depositors' liabilities. And EBU is - according to the EU Commission and the ECB - a necessary element of the sovereign-banks 'break' that includes ESM. Now, ESM is about bailing out the banks.

Is EBU 'about getting a banking system that serves the real economy'? Well, nothing in the EBU proposals so far has much to do with the 'real economy' in a positive sense of serving it. At least nothing that requires an EBU and cannot be done absent EBU. Deposits insurance? Doesn't need an EBU. Joint supervision and regulation? Hardly much to do with the real economy, unless one is to make a claim that the two are fail-proof way of ensuring that a new crisis won't happen. In fact, when it comes to the real economy, the EBU is a part of the policy instruments package that includes depositors  bail-ins, mechanism for sovereign liabilities imposition and fiscal harmonisation - these are about the real economy, but there is little in terms of 'support' here. More like 'limiting damage' by 'spreading the cost'. Reality check: UK has an EBU equivalent, US and Japan have one... all had banking crises that cost their real economies dearly...

So Mr Rehn is just plain propagandising, right? Well, sort of - the EBU is a necessary, but not a sufficient condition for the survival of the Euro. If you accept the thesis that Euro's survival is the 'service' that real economy needs, then you have 1/2 of Rehn's equation there.

Onto Mr Lamy who says that Europeans need something new to drive their attention away from the bad things that are old. Contemplating the past is disuniting the peoples of Europe. Giving them something new to desire (may be a promise of a new iPad for everyone would work?) will shift them to work toward the future, presumably forgetting and forgiving the past and the present. How did the Soviet leaders not think this one up? 'We promise you this better future because we screwed up your past and present' school of politics...

Ireland's Taoiseach is honestly thinking that EBU is necessary to give credibility to European leaders because they promised EBU. Neither the concept of 'do we need A in the first place', nor the irony of his party pre-election promises not being delivered on strike Mr Kenny as being a touch testing. And then there's 'following through on decisions is the very least our citizens expect and demand'. Not really. Citizens demand that political leaders (a) adopt right decisions, then (b) implement right decisions. Having not established that EBU is right fails both (a) and (b).

But the most priceless bit of Mr Kenny's statement is that he believes that something is crucial because it is a credibility test. Mr Kenny's logic here is risking a resemblance to a schoolboy's logic who, in fear of hearing 'Chicken! Chicken!' from a schoolyard bullies heads off to carrying out a silly and dangerous deed, lest his 'credibility' be challenged.

This, per the EU's powerful, is 'leadership' at the time of a crisis?..
Posted by TrueEconomics at 6:37 AM