Here's an interesting view on European banks: http://www.voxeu.org/article/urgent-need-recapitalise-europe-s-banks . The core point is here: 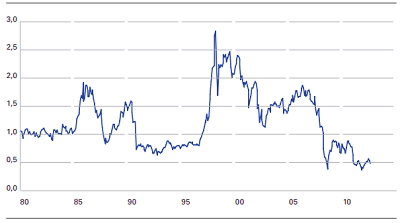 Quote: " On average, the market-to-book value of European banks now is about 0.50 (see Figure 1). This indicates that accountants’ estimates of bank capital are far too rosy, and that banks have substantial hidden losses on their books."

But there's more. "Until now, Europe’s banking sector has been kept afloat by implicit state guarantees of virtually all liabilities. …in 2012 these guarantees provided banks in Europe with an annual average funding advantage amounting to 0.3% of total assets. …An annual funding advantage of 0.3% of assets can be capitalised to be equivalent to 2% of total assets, on the assumption of a discount rate of 15% commensurate with banks’ uncertain earnings prospects. Given total banking assets of €33 trillion in the Eurozone, we are talking about an implicit guarantee of about €650 billion."

In short, through the crisis, European banking system was pumped with implicit supports to the tune of EUR2.6 trillion.

More than that. EBA is delaying stress tests into 2014, so we won't even in theory be able to know what is going on in the banks. Except, one has to doubt that the theory is a good instrument for the reality, as EBA has managed to bungle all stress tests it carried out to-date. In other words, EBA is acting de facto to increase implied supports as it delays and evades recognition of losses.


Look at the following paper: http://www.cpb.nl/en/publication/private-value-too-big-fail-guarantees (alternative link via ssrn: http://papers.ssrn.com/sol3/papers.cfm?abstract_id=2271326) which concluded that: "over the period 1-1-2008 until 15-6-2012" for only 151 European banks, "the size of the funding advantage' granted by various state supports "is large and fluctuates substantially over time. For most countries it rises from 0.1% of GDP in the first half of 2008 to more than 1% of GDP mid 2011. Our results are comparable to findings in previous studies. We find that larger banks enjoy on average higher rating uplifts, but the effect of size does not increase anymore for banks with total assets above 1,000 billion Euro compared to banks with assets between 250 and 1,000 billion Euro. In addition, a higher sovereign rating of a bank‟s home country leads on average to a higher rating uplift for that bank."

In other words, remove the protectionist supports and the system will crumble.

Note, the paper also cites the case of Ireland. "When we take a closer look at the funding advantages of banks from Spain, Italy, and Portugal in Figure 7, we see that the advantages enjoyed by banks are relatively small in these countries. This can be explained by the smaller rating uplifts that the banks from these countries enjoy. The fact that rating uplifts are relatively small in these countries is likely to be related to lower sovereign creditworthiness. The banking sector in, for example, Spain is not necessarily smaller when compared to GDP than the banking sector in France and Germany. So this is unlikely to explain the results we find. In Ireland, funding advantages are relatively large compared to the other three countries. The funding advantage enjoyed by Irish banks is somewhat higher than the advantage enjoyed by French and German banks."

Figure 7: funding advantage per country (Spain, Ireland*, Italy, and Portugal) (*note that the figure for Ireland is drawn on a different scale) 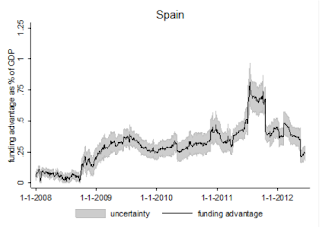 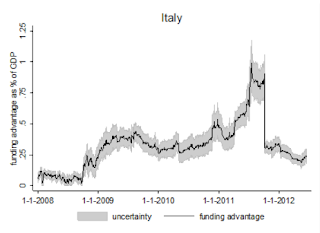 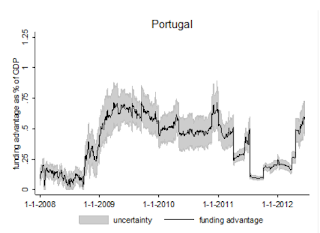 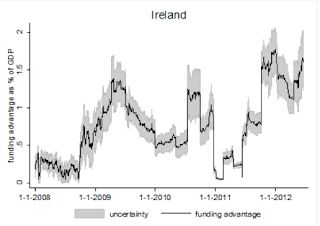 Now, when you just thought that the resolution path (as suggested by the article linked above) is well-known: assess, expose, recap, things are getting slightly out of hand. BIS has warned that simply pumping more capital into banks might be a wrong thing to do. Here's the BIS paper: http://www.bis.org/publ/cgfs49.pdf.

In the nutshell, BIS is saying that core tools for dealing with banks insolvency so far are… possibly… making these banks less safe, not more. The problem is that under Basel III, safety of bank capital is determined by safety of underlying assets held as capital (so far - fine). These 'safe' assets are… err… Government bonds and Government-guaranteed commercial paper (e.g. MBS). The idea is that 1) these assets are more secure, thus provide better cushion in the case of distress, and 2) these assets can be sold (are liquid) easily to cover any losses.

Problem is: there is a shortage of 'safe' assets as defined by Basel. The shortages are riven by 1) higher demand for these assets, 2) smaller number of 'safe' (highly-rated) sovereigns, 3) reduced issuance by highly-rated sovereigns ('austerity') and 4) central banks and non-banking financial institutions (e.g pensions funds) hoovering up these assets. BIS is not worried about the shortages of safe assets, but here are some links on this: 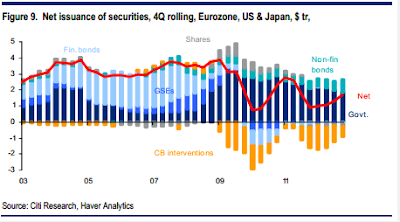 In turn, shortages of safe assets, even if nascent, can drive ups emend for riskier assets and thus increase riskier assets allocations by the financial intermediaries (think insurance and pensions funds on drugs).

Here's a very interesting discussion of what can happen next from @simonefoxman: http://qz.com/88585/new-fears-of-financial-interconnectedness-highlight-the-delusion-of-bank-capital/?oref=dbamerica

"And therein lies the risk. The assets don’t change hands permanently: It’s just one institution lending junk bonds to another and borrowing higher-quality ones in return. So a default on one side could translate into problems for the other. In such cases, the “high-quality capital” is only as reliable as the low-quality capital it was exchanged for. Moreover, if assets on either end of such a deal are mispriced, it could have knock-on effects across the financial system.

As a result, warns the BIS, the financial system is becoming more interconnected—and thus more susceptible to system-wide problems of the kind we saw in the financial crisis a few years ago."

Once again, Basel III might be off the target by a mile when it comes to improving quality of risk buffers in the banks… Just as with liquidity buffers: http://trueeconomics.blogspot.ie/2013/05/352013-basel-25-can-lead-to-increased.html

Posted by TrueEconomics at 8:54 AM