This is an unedited version of the Sunday Times article from June 16, 2013


The latest data from the Central Bank shows that in two years since the current government took office, Irish banking sector is not much closer to a return to health than in the first months of 2011.

Objectively, no one can claim that the task of reforming Irish banking sector is an easy one. However, credit and deposits dynamics in the sector point to the dysfunctional stasis still holding the banks hostage. Despite ever-shrinking competition and vast subsidies extended to them, Irish banks are not investing in new technologies, systems and models. Banks’ customers, including businesses and households, are thus being denied access to services and cost efficiencies available elsewhere. In short, the Government-supported model of Irish banking is failing both the sector and the economy at large.


In April this year, total inflation-adjusted credit advanced to the real domestic economy, as measured by loans to Irish households and non-financial corporations, stood at EUR175,419 million. Since Q1 2011, when the current Government came to power, real credit is down EUR32,302 million. This figure is equivalent to roughly twice the annual rate of gross investment in the economy in 2012. Total credit to non-financial corporations has now been in a continuous decline for 48 months.

Half of this contraction came from loans over 5 years in duration. These loans are more closely linked to newer vintage capital investment in the economy, generation of new jobs, R&D and innovation activities, as well as new exports, than loans with shorter duration. Let’s take this in a perspective. The fall in total longer duration lending since mid-2009 is equivalent to losing 70,000-90,000 direct jobs. Factoring in interest income plus employment-related taxes, the foregone credit activity has cost us close to the equivalent of the tax increases generated in Budgets 2012-2013.

It would be fallacious to attribute credit supply declines solely to the property related lending. Based on the new data reported this Thursday by the Central Bank, loans levels advanced to private enterprises have fallen, between Q1 2011 and Q1 2013 in all sub-sectors of the economy, with largest loans supply declines recorded in domestic, as opposed to exports-oriented, sub-sectors.  All loans are down 6%, while loans to companies excluding financial intermediation and property related sectors are down 5.8%.

However, on the SMEs lending side, some of the steepest loans declines came from the exports-focused enterprises, such as ICT sector, where credit has fallen 9.7% on Q1 2011, or in computer, electronic and optical products manufacturing where loans are down 6.5%. Even booming agriculture saw credit to SMEs falling 5.7% over the last two years, while credit for scientific research and development is down 13.3%.

The picture is, in general, more complex for the levels of credit outstanding in the SMEs sector. On the demand side, in Ireland and across the euro area, there has been a noticeable worsening in the quality of loans applications filed with the banks during the crisis. In a research paper based on the ECB SAFE enterprise level survey data for euro area SMEs, myself and several co-authors have identified the problem of selection biases in companies’ willingness to apply for credit. In simple terms, SMEs more desperate for funding due to deteriorating balancesheets are more likely to apply for credit today. In contrast, healthier firms are more likely to avoid applying for bank credit.

ECB data also shows that Ireland’s problem of discouraged borrowers is much worse, than the euro area average. For example, in Ireland, 21% of all SMEs that did not apply for credit stated that they did so for fear of rejection, almost 3 times the rate of the euro area average and nearly double the second worst performing economy – Greece.


On the funding side, Irish banks have been and remain the beneficiaries of an unprecedented level of funding support compared to their euro area counterparts.

A recent research paper from the Dutch think tank CPB, titled "The private value of too-big-to-fail guarantees" showed that through mid-2012, the pillar banks in Ireland have availed of the largest subsidy transfers from the sovereign and Eurosystem of all banking systems in Europe. Funding advantages, accorded to the largest Irish banks, alone amounted, back in June 2012, to more than double the share of the country GDP compared to Portugal, and more than seven times those in Spain and Italy.

Removal of the explicit Guarantees was supposed to serve as a major step in the right direction. Alas, Irish pillar banks continue to depend for some EUR39.5 billion worth of funding on Eurosystem.  The latest Fitch report on the pillar banks shows that this reliance is likely to persist as loan/deposit ratios remain relatively high. Latest figures put Bank of Ireland, AIB and PTSB loan/deposit ratios at around 120%, 130%, and over 200%, respectively.

And there are further issues with funding in the system. By mid-2014, AIB is required to raise EUR3.5 billion to redeem the preference shares held by the National Pension Reserve Fund. Bank of Ireland will have to find EUR1.8 billion for the same purposes. In both cases there are questions as to how these funds can be secured in the current markets without either further reducing money available for lending or tapping into taxpayers’ funds.


Subsidies to the ‘reformed’ Irish pillar banks go hand-in-had with the regulatory protectionism, which completes the picture of massive transfers of income from the productive economy to the zombified banking sector.

Since 2008, Irish financial services continue to experience ongoing process of consolidation and, underlying this, the reduction in overall competition. Data from the ECB shows that the number of financial institutions operating in the country has fallen in 2012 to the levels below those recorded in 2000-2008. Dramatic declines in the fortunes of the third and the first largest lenders – Anglo and AIB - should have led to a drop in the combined market share held by the top 5 banks. Instead, the market share of top 5 credit institutions rose over the years of the crisis.

To a large extent, this reflects exits of a number of foreign lenders from the market. However, unlike in the case of the US and the UK, there are no new challengers to the incumbent players in the Irish asset management, investment, corporate and merchant banking, and credit unions sector. Neither the regulators, nor the banks have any incentives to encourage new players' entry.

And this has direct adverse impact on the overall health of the economy. When we studied the effects of banking sector concentration on firms’ willingness to engage with lenders, we have found that higher concentration of big banks’ power in a market is associated with lower applications for credit and higher discouragement.

As the result of the reforms undertaken in the Irish banking sector, our banking services are left to stagnate in the technological and strategic no-man's land.

Mobile and on-line banking systems remain nothing more than appendages to the existent services, with only innovation happening in the banks attempting to force more customers to on-line banking to cut internal costs.

Currently, worldwide, banking services are migrating to systems that can facilitate lower cost customer-to-customer transactions, such as direct payments, e-payments, peer-to-peer lending, and mixed types of investment based on combinations of equity and debt. All of this aims to reduce cost of capital to companies willing to invest. Irish financial services still operate on the basis of high-cost traditional intermediation and the Government policy is to keep hiking these costs up. Instead of moving up to reflect the true levels of risks inherent in Irish banks, deposit rates for non-financial corporations and households are falling. Interest on new business loans for non-financial corporations is up 105 to 197 basis points in April 2013, depending on loan size, compared to the average rates charged in Q1 2011. Over the same time, ECB policy rates have fallen by 75 basis points. This widening interest margin is funding banks deleveraging at the expense of investment and jobs.


Combination of the lack of trust in the banking system, alongside the lack of access to direct payments platforms means that many businesses in Ireland are switching into cash-only transactions to reduce risk of non-payments and invoicing delays. Currency in circulation in Ireland is up 10.3% on Q1 2011 average, while termed deposits are down 6.3%.

With big Pillar Banks unable to lend and incapable of incentivizing deposits growth, we should be witnessing and supporting the emergence of cooperative and local lending institutions. None have materialized so far. If anything, the latest noises from the Central Bank suggest that the credit unions can potentially expect to take a greater beating on the loans than the banks will take on mortgages and credit cards.

All-in, Irish banking system is far from being on a road to recovery so often spotted in the speeches of our overly-optimistic politicians and bankers. The credit squeeze on small businesses and sole traders is likely to continue unabated, and with it, the rates of business loans arrears are bound to rise. 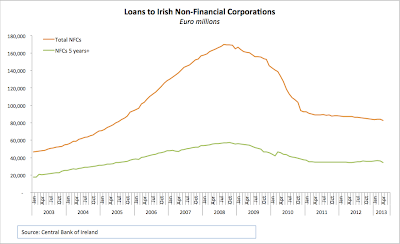 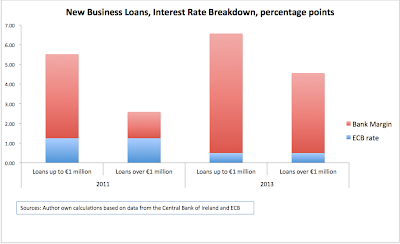 Box-out:
In this month’s survey of economists by the Blackrock Institute some 64% of the respondents stated they expected euro area economy to get e little stronger over the next 12 months and none expected the recovery to be strong. In contrast, 74% of respondents thought German economy will get better and 81% forecast the same for the UK. In the case of Ireland, however, only 57% of respondents expected Irish economy to become a little stronger in a year through June 2014 (down on 75% in May 2013 survey). None expected this recovery to be strong. Interestingly, 69% of respondents describe Irish economy's current conditions as being consistent with an early or mid-cycle expansion - both normally consistent with above-trend rapid growth as economy recovers from a traditional recession. Thus, the survey indicates that majority of economists potentially see longer-term prospects for the Irish economy in the light of slower trend growth rates. Back in 2004-2005, I suggested that the Irish economy will, eventually, slowdown to an average rate of growth comparable to that of a mature small euro area economy. This would imply an annual real GDP growth reduction from the 1990-2012 average of 4.9% recorded by Ireland, to, say, 1.8% clocked by Belgium. Not exactly a boom-town prospect and certainly not the velocity that is required to get us to the sustainable Government debt dynamics.

Posted by TrueEconomics at 12:25 PM