This is an unedited version of my Sunday Times column from May 16, 2013


Not known for its 'ahead of the pack' thinking and bruised by recent controversies, nowadays, the ESRI focuses on a more retrospective in-depth analysis of the trends shaping Irish economy and society. Aptly, this week's most talked-about Irish research note was ESRI paper on the impact of the crisis on households. Covering data through 2009/2010, it offers both a fascinating look into economics of our lost generations, and a reminder that it takes official Ireland at least 3 years before everyday reality gets translated into policy-shaping analysis.

The topic is close to my heart: back in 2010 and then in 2012, in these very pages, I wrote about the fact that Ireland is facing not one, not two, but a number of lost generations covering those under the age of 50. Things only got worse since.

The crises we face continue to destroy lives and wealth of the 35-50 year-olds, who mortgaged their future back in 2003-2007. Pensions and savings are gone, psychological and social wellbeing is under unrelenting pressure from the threat of unemployment, losses in after-tax disposable income, negative equity, the banks' push to extract revenues from borrowers, and the internecine policies adopted by the Government.

Housing wealth and negative equity exact the greatest toll. Housing wealth accounted for over 3/4 of the total real disposable wealth that formed the bedrock of pensions provisions in the years before the crisis hit. This has now tumbled by over half, once taxes and property prices declines can be factored in.

Income losses are not far behind. Not withstanding the effects of tax increases, an average working age family in this country lost close to EUR100,000 in income between the beginning of 2008 and the end of 2012.

Much of these losses were accumulated by the prime working age group of 35-50 year-olds. Adjusting for changes in population and unemployment in these groups, relative to the rest of the country population, the opportunity cost of foregone savings, and adding the impact of tax increases, the real disposable income declines during the crisis run somewhere closer to EUR120,000 per family with two working adults in the 30-50 years of age group. When you consider the losses in housing wealth over the life time, and interest costs on negative equity components of mortgages, the total real life-time losses due to the crisis easily reach over EUR200,000 per family. This number assumes expected house prices appreciation in line with 2% annual inflation from 2013 on, but excludes effects of future tax hikes.

And more tax hikes are coming still. The Government might boast that ‘most of the adjustment is behind us’. Alas, IMF’s latest forecasts for the Irish economy clearly show that by 2018, compared to 2012, Irish Government tax take needs to increase by EUR12.5 billion per annum. Of these, EUR8.7 billion in revenue will come from personal income taxes and VAT. For comparison, between 2009 and 2012 receipts from these two tax heads rose only EUR2.9 billion. Social Insurance contributions are required to rise by EUR2.2 billion in 2013-2018, against the decline of EUR2.6 billion recorded in 2009-2012.

The ESRI research, published this week, does not go as far as attaching real numbers to the losses sustained by Irish households, but it does conclude that "income and consumption increase roughly steadily for the average household over the age of 45 from 1994/95 to 2009/10. ...In sharp contrast to the increase in earning and expenditure of older households over the last two decades, there has been a large drop in income and consumption for the younger average household in the crisis. Between the 2004/05 survey and that of 2009/10, real disposable income decreased by 14 per cent, real consumption including housing by 25 per cent and excluding housing by 32 per cent."

The future looks bleak for today's 30-50 year-olds even beyond income declines and the negative equity considerations. Per ESRI, "Mortgages are most prevalent in the 35-44 year bracket, with more than half of households in this group having a mortgage. About 43 per cent of the households aged 25 to 34, and 45 per cent of those aged 45 to 54 are mortgage holders as well." In other words, those in 30-50 years of age cohorts are in the worse shape when we consider housing wealth.

The ESRI fails to note that these households are also facing a very uncertain future when it comes to the cost of funding their mortgages.

Currently, ECB benchmark rate stands at 0.50%, which is miles below the pre-crisis period average of 3.10%.. At some point in time, Germany and other core European economies will be back delivering the rates of growth comparable to those seen over 2002-2007 period and the ECB rates will inevitably rise. At the same time, Irish banks will be carrying an ever-worsening book of household loans. With every year, average mortgage vintage on banks books moves closer and closer to 2006-2007 peak market valuations, as better quality older mortgages are being paid down. As real estate prices continue to signal zero hope of a rapid recovery, Irish banks will have to keep margins well above pre-crisis averages. Failing SMEs loans and Basel III capital hikes add to this pressure.

This week IMF released a set of research papers focusing on expected paths for unwinding extraordinary monetary policy measures deployed by the central banks around the world. Their benchmark scenario references interest rates increases of 2.25% for longer maturities and the adverse scenario a 3.75% rates hikes. Were the benchmark scenario to play out, mortgages rates can jump by over 2 percentage points on today's rates, before the increases that would be required for capital supports.

For mortgages of 2003-2007 vintage a return to historical levels of ECB rates combined with higher lending margins will spell a disaster.

Put simply, anyone who thinks the worst is now behind us should heed the warning: wealth destruction wrecked by the property bubble collapse is yet to run its full course.

The ESRI report doesn't tell us much about the expected effects of the crisis on our youngest working-age cohorts of 18-25 year olds. Truth is they too count as Ireland's Lost Generation.

Lower incomes and higher debt burdens of the 30-50 year-olds will translate into longer working careers and less secure retirement. For the younger generations, this means fewer promotional opportunities and reduced life-time earnings in the future, as well as higher tax burden to care for the under-pensioned older generation. The disruption and delays in access to career-building early jobs will also cost dearly. Many of today’s graduates of the universities with professional degrees and skills face rapid depreciation of their earnings when they delay entry into the professions.

Our economy’s re-orientation toward ICT services is an additional risk factor. Recent research points to an alarmingly high rate of skills depreciation in ICT services sectors, with declining employability of those in late 30s and early 40s compared to their younger counterparts. Likewise, worldwide and in Ireland, the earnings premium, even adjusting for the risk of unemployment, associated with education is now much smaller than in the late 1990s - early 2000s.

The ESRI attributes younger households' aggressive cuts in consumption during the crisis to the bottlenecks in credit supply, parrot-like mimicking the Government assertion that if only the banks were lending again, things will miraculously return to normal. The reality on the ground is different. Irish society has been hit by a series of inter-related crises that not only reduced credit supply to younger households, but made household balance sheets insolvent by a combination of high debt, reduced life-time disposable incomes and wiping out middle and upper-middle classes wealth.

The only solution to these crises is to help repair households' balance sheets by helping them to deleverage their debts faster and a lower cost. This can be achieved solely by lowering tax burden on the households and aggressively writing down unsustainable levels of debt. Like it or not, were the banks to start lending tomorrow, even ignoring the fact that the cost of credit is only going to climb up in the future, the impact this will have on the economy and Irish households will be negligible.

Two successive Irish Governments have spent over 5 years throwing scarce resources on repairing the banks. It is time to realize that doing more of the same and expecting a different outcome is not bright policy to pursue. It is time to focus on what matters most in any economy – people. 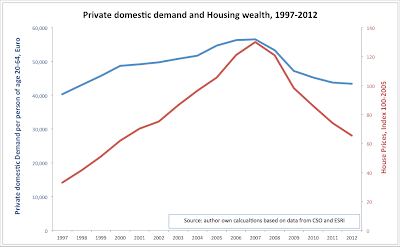 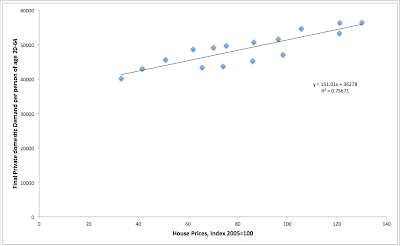 This week, the IMF published its Article IV assessment of Malta’s economic conditions. The study expresses one major concern about the risks faced by the Maltese economy in the near future that is salient to the case of Ireland, yet remains unvoiced in the case of our assessments by the Fund. Quoting from the release: "In the longer term, regulatory and tax reform at the European or global level could erode Malta’s competitiveness. The Maltese economy, including the financial sector and other niche services, has greatly benefitted from a business-friendly tax regime. Greater fiscal integration of EU member states and potential harmonization of tax rates could erode some of these benefits, with consequences on employment, output, and fiscal revenues."

Ireland is a much more aggressively reliant on tax arbitrage than Malta to sustain its economic model and has been doing so for far longer than Malta. Both, our modern manufacturing and traded services sectors are virtually captive to the foreign multinationals reliant on tax arbitrage opportunities to domicile here. Yet, neither the IMF, nor any other member of the Troika seem to be concerned about the prospect of tax reforms in Europe and elsewhere in the context of Irish economy. May this be because the elephant in the room (our reliance on tax arbitrage) is simply too large to voice in the open?

Posted by TrueEconomics at 11:16 PM