Over the recent years we have been told ad nausea that all the economic suffering and pain inflicted upon us was about 'deleveraging' our debt overhang, 'paying down our debts', 'repairing balancesheet of the economy' and so on. Well, surely, that should mean reduction in our total economic debt levels, right? 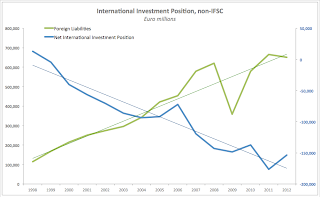 The above exclude IFSC.

Meanwhile, IFSC continues to grow in size, both in absolute and relative terms: 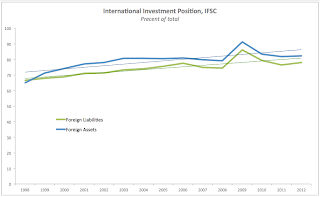 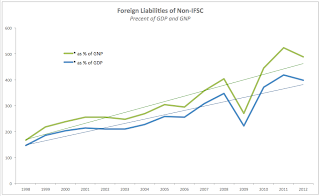 You might be tempted to start shouting - as common with our officials and 'green jerseys' - that the above are gross figures and that indeed we have vast assets that are worth just so much... Setting aside the delirium of actually thinking someone can sell these 'assets' to their full accounting / book value etc, err... things are not looking too bright on the net investment position (assets less liabilities) side: 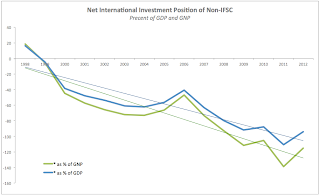 In 2007, Irish net investment position vis-a-vis the rest of the world was a deficit of 63.3% of GDP and 73.6% of GNP. In 2012 the net position was in deficit of 93.9% of GDP and 115.2% of GNP. Put differently, even were the Irish state to expropriate all corporate, financial and household assets held abroad and sell them at their book value, Ireland would still be in a deficit in excess of 115% of our real economy.

But back to that question about 'deleveraging' our debt overhang, 'paying down our debts', 'repairing balancesheet of the economy' and so on... the answer to that one is that Ireland continues to increase the levels of its indebtedness. The composition of the debt might be changing, but that, folks, is irrelevant from the point of view that all debts - government, banking, household, corporate, etc - will have to be repaid and/or serviced out of our real economic activity, aka you & me working...
Posted by TrueEconomics at 9:24 AM

I have a question wrt to retail sales and demographics.

What are the projections for Ireland?

I have being reading recently about Harvard demographer Harry Dent who predicted in the early 1990s that around 2012, the aging of the baby boomers will cause the US economy to stagnate. This is because people's personal spending peaks between the ages of 46 to 50 years old and then declines.

This peak of baby boomer population bulge has now passed this 46 to 50 age bracket as of 2011. This may help explain the difficulty for a solid US recovery. Currently we have a very slow but highly -stimulated-recovery, but whether this could survive without stimulation and considered genuine growth is another question.

So with these US demographics, and continued debt deleveraging. The US retail sales will struggle.

In Ireland also on this downward demographic spending slope.?

We know deleveraging is going to continue in Ireland for a long time, putting spending under-pressure.

But, do we have a fertility rate and demographics genie that will help to save the day?

Pure demographics don't matter in a small open economy with historical & institutional supports for international mobility of labour. In recent years, Ireland has been attracting young talented skilled workforce from abroad to work in MNCs-led sectors (e.g. ICT and web-based services), but these are transient workers, who come into Dublin for 2-3 years and then leave on foot of atrocious cost of living and actual lack of cultural and social life for them here. At the same time, we have been exporting our own talent to the rest of the world. This creates a work force with falling average quality.

US structural slowdown is a massive problem, however, for Ireland. We are dependent on US FDI and trade with the US, with no capacity of replacing losses arising from the US slowdown with trade and investment flows vis-a-vis other (non-US+UK+EU) geographies. For all the talk about BRICS etc, Irish businesses and business support agencies (IDA and EI) so far cannot meaningfully penetrate these other (I call them 'uncomfortable' for that reason) geographies, because our traditional model for doing business (find some executive with great auntie from Co Cavan and hammer them with nostalgia) does not work in Shanghai or Rio.

Ireland has exhausted the potential for tax arbitrage (not because we have no room for improvement on tax rates, but because we became obese on public spending side, implying that any more 'competitiveness' gains on tax side will require personal income taxes to go up and there is no capacity in the financially strained households to bear any more bruden). This is a structural problem of an economy that run out of its policies road. The train has stopped. It can still blow steam into the air making noises (spurts of growth of 2-4% in given quarter / year), but it can't sustain a real growth journey over, say, 10 years horizon.

Alas, such rethinking is impossible, as we have stone-age brains writing policy in civil service & social partnership, political & business elites.

I agree about the stone-age brain thinking!

Unfortunately the elites have sleep-walked us into a cul-de-sac and downward spiral, as they continue to cure a debt problem, with more debt!

I have major concerns also for FDI in Ireland and our corporate tax rate.

US companies are sitting on Billions of $ in profits which will be repatriated at some point.
Either US gov will force the issue or create some sort of tax amnesty to encourage this flight of capital out of Ireland and eurozone.

I also believe the EU/Germany will eventually insist that our Corporate tax rate increases.

The IFSC / financial services will be deleveraged and the "wild-west of capitalism" will end.

At that point we will see what our real GNP, GDP, trade balance numbers look like once this funny transfer pricing and profit-offshoring data is removed.

How many great indigenous Irish companies have we produced in the last 20 years.

It is all going to End in tears!