Let make some sense of the data as we have it:

I would not call this a 'recovery', yet, especially since we have drawn another 'u' around December 2013-April 2014.

That said, relative to peak prices are down 45.1% and are up 11.9% on crisis period low. Cumulated gain over last 24 months is only 9.47% which equates to annual average growth in the 'recovery' period of just 4.63%. Again, given the depth of decline from the peak, this is not a 'bubble'-type recovery.

Current national prices are 26.9% below Nama valuations (inclusive of LTEV and risk cushion) so for Nama to return profit on average acquired loan it will need ca 27.4% rise from here on. At current running 24 months growth rate, that will require roughly 6 years. 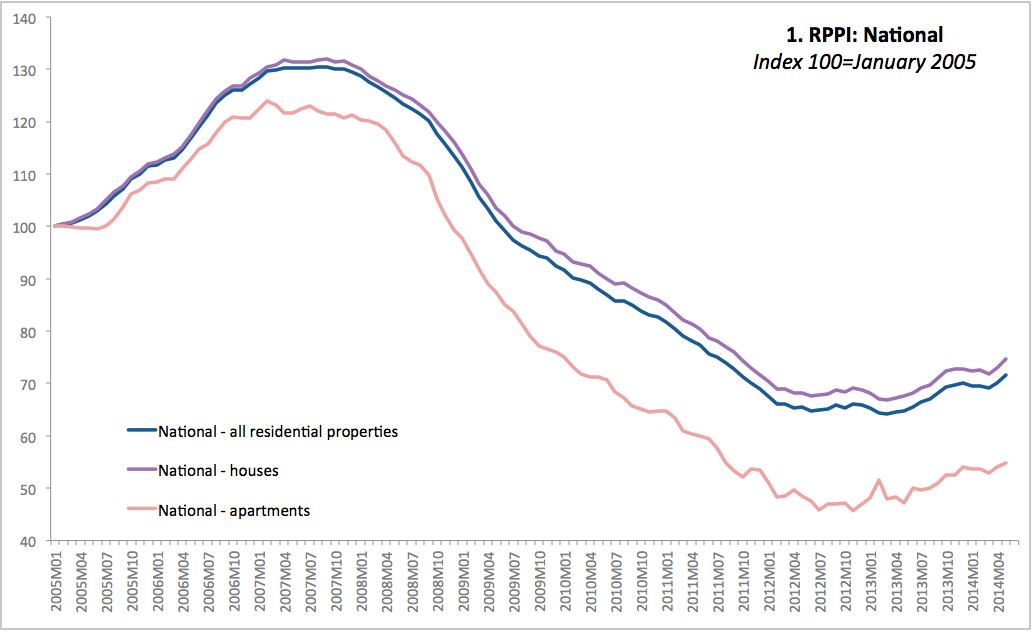 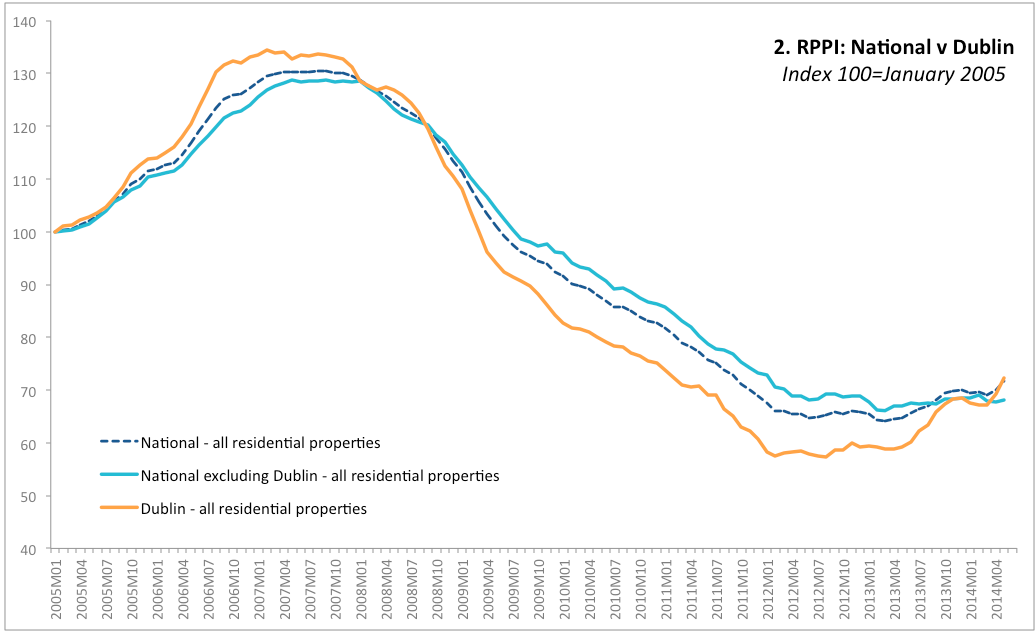 Point 3: Dublin properties, despite all the talk about 'new bubble' and 'boom' are only now in line with those nationally (chart above shows this much). In other words, Dublin 'boom' is a correction for much steeper decline in Dublin properties relative to the rest of the country. 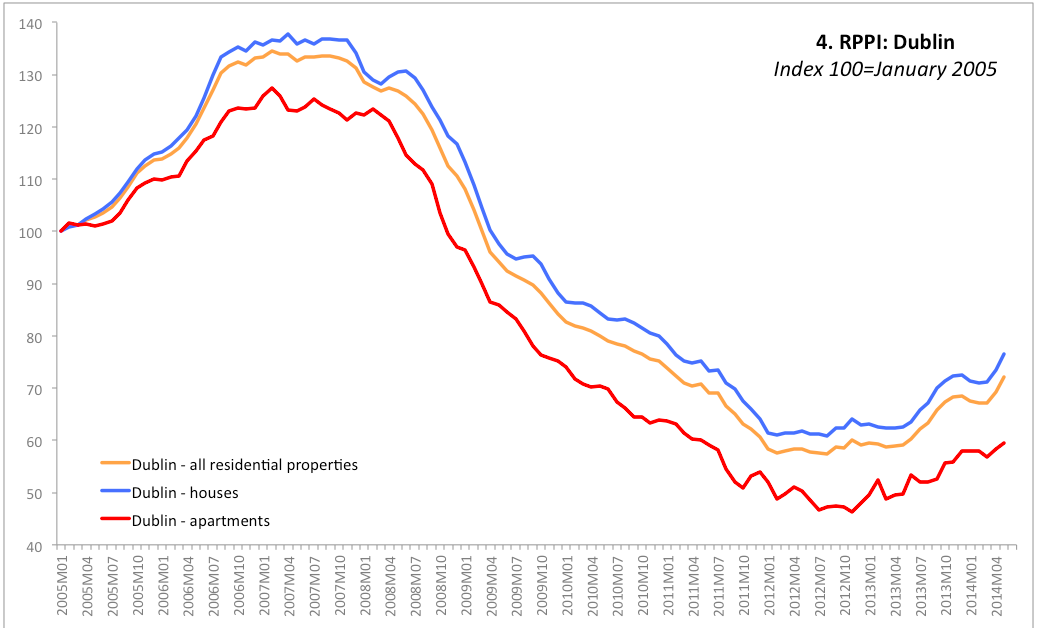 Relative to peak, Dublin properties are still down 46.3% although they are now 26% above the crisis trough. Cumulated gain in Dublin over 24 months through May 2014 is 23.6% which equates to roughly 11.2% annual rise - robust and clearly signalling recovery, in contrast to ex-Dublin markets.

But, 3mo MA through April 2014 was % below 3mo MA through January 2014, while 3mo AM through May 2014 is 2.66% up on 3mo MA through February 2014, which shows some volatility in the index and can be a sign of the rally regaining some momentum or seasonal effects combining with some improved economic news or simply volatility taking hold of the recent data. Simple answer - we have no idea what is going on.

Crucially, as chart above shows, apartments segment of Dublin market is showing weaker growth over the last 6 months than houses segment. This is surprising, given rapid rises in rents and reported shortages of accommodation.

So here you have it: for all the hoopla about 'mini-bubble' etc, things are still very much shaky:

Posted by TrueEconomics at 12:02 PM

Mortgage Drawdowns are at 1974 Levels for cryin out loud.

These so called CSO "Property Price" Figures are only based on Mortgages & exclude cash sales.

The Market is "shaky" on very thin Ice.

If I was left a House in a Will - I'd contest the Will lol!

I enjoyed your writing from the time I started reading them when I arrived in Ireland in 06 but late 2010 when I bought a house here after the major crash you and others correctly anticipated unfolded in such spectacular fashion.

What I am concerned about is that you might be a perma bear ignoring the fact that prices totally overshot, and as one would expect in any recovery, it is being led from the centre, i.e. south Dublin with rest of country yet to follow.

If the market manages to hold these recent gains and the effect spreads am I to expect in 2 years time you will be writing something along the lines 'Ah yes, sure the headline says prices are x% higher but if you exclude this or that and adjust for y and z% the market is still lower than 2006!' ... The market is grinding higher so why fight it? I am reminded of the gold bugs who have been spectacularly correct but completely missed out on switching any gold into equities at fanatastic relative value opportunity 5 years ago and continue to mock the 'fools' in equities which are only supported by the stupid policies of central banks. Well, that may well be true but after how many years and how many hundreds of per cent would they just admit they were plain wrong?

Sandymount, I actually agree with much what you said. Hence my entire point is that current 'recovery' is still fragile, has more room to go and is not a bubble at this stage.

If you check Daftdrop you will find 16 more Price Decreases than Price Increases for Dublin this Month.

The only things "grinding higher" are Mortgage Arrears & Bank Losses.

Then we've all these new Repossession Cases which have just started.

The Happy Clappers have obviously doubled up on all that Hopium they'd been smoking lol.