IMF released Staff Report on the First Post-Program Monitoring Discussion for Ireland. Some of the highlights over few posts.

Per IMF: "Banks’ 2013 financial statements show higher provisions and, although easing funding costs are supporting bank profitability, credit continues to contract." Ugh? Surely not because the banks are lowering rates on existent and new debt? CBI data shows no such moves.

Here is how dramatic was the decline in banks funding costs (all declines down to ECB lower rates, plus Government ratings improving): 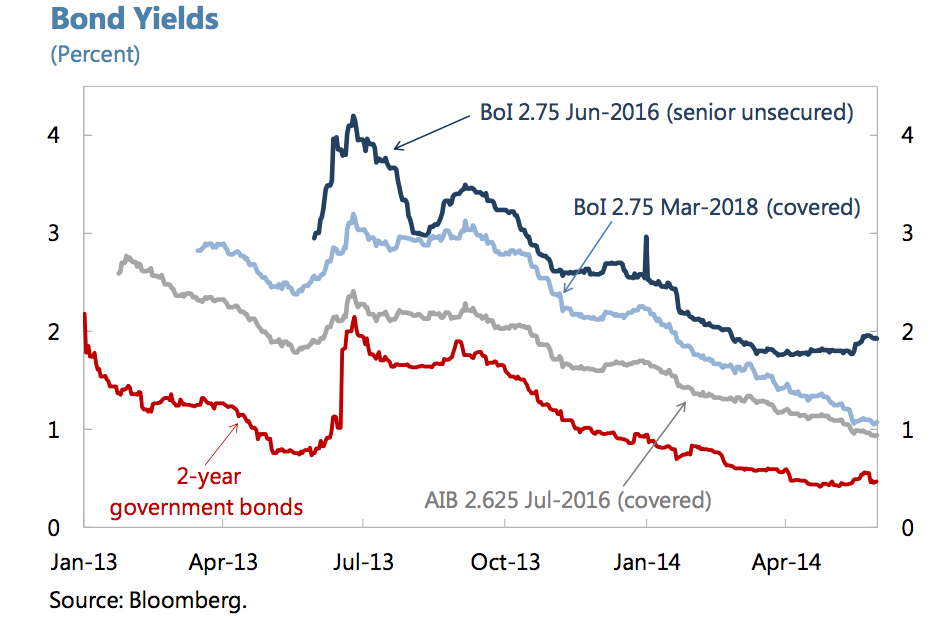 "AIB, BoI, and Permanent tsb (PTSB) set aside provisions totaling €2.5 billion in the second half,
reflecting the CBI’s updated guidelines introduced in May 2013 and the CBI’s balance sheet assessment (BSA) finalized at end November, together with allowances for new NPLs."

Coverage ratios of provisions to NPLs increased at all the banks. Which is good for banks balance sheets and forward potential for lending, but bad for current potential. And it is material for the stress tests forthcoming (see next post on this).

"Higher net interest income in  2013 partly offset provisioning to result in a smaller full year overall loss than in 2012. However, new lending remained weak, with credit outstanding to households and non-financial firms contracting 3.7 percent and 6.2 percent y/y, respectively, in April."

Ah, I wrote loads about credit supply problems: here's a note on latest data for credit supply to households http://trueeconomics.blogspot.ie/2014/06/1062014-credit-to-irish-households-q1.html and another one on latest data on credit supply to Irish private sector enterprises: http://trueeconomics.blogspot.ie/2014/06/662014-credit-to-irish-resident.html And the third post coming up today will cover the margins banks charge on loans relative to what they pay on deposits... the margins that act to extract value out of the economy.

And here's IMF's chart summarising the above developments: 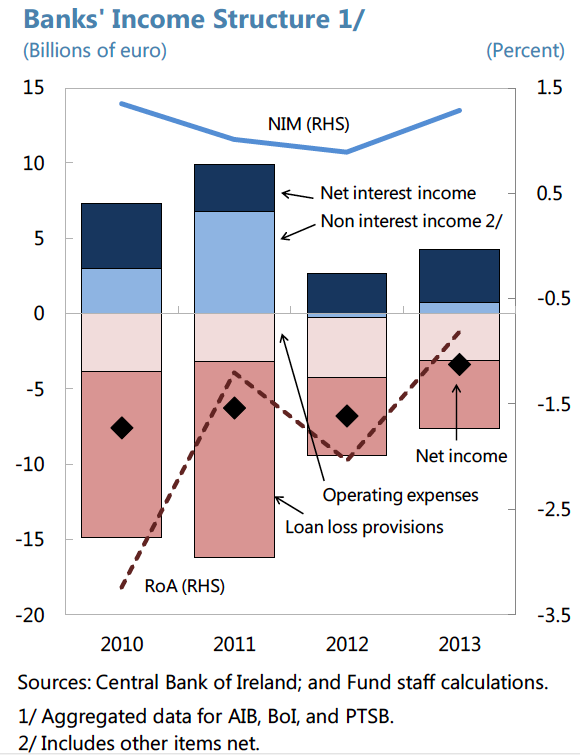 All said, banking sector remains one of the core weak points. In assessing downside risks to Fund's forecasts for Ireland, IMF identified 4 key sources of risks. Banks are the fourth: "Bank repair shortfalls. As firms’ internal financing capacity is drawn down, sustaining domestic demand recovery will depend increasingly on a revival of sound lending, where substantial work remains ahead to resolve high NPLs to underpin banks’ lending capacity."

But for all the talk, banks remain sick. Per IMF: "Banks’ NPLs remain very high, at 27 percent of loans at end 2013, in a range of 17–35 percent across the three Irish headquartered banks. Such ratios reduce banks’ potential capacity to lend by hurting profitability, including through higher market funding costs, limiting the supply of collateral for funding, and diverting credit skills. With recovery taking root and property markets improving, banks may see further upside from postponing NPL resolution. But such choices at the individual bank level may not sufficiently internalize the macroeconomic impact of banks collectively leaving NPLs at high levels in terms of barriers to new lending and an inefficient allocation of capital, warranting supervisory pressure on banks to accelerate asset clean up. Reducing uncertainties around the value of banks’ loans will also enhance public debt sustainability by supporting valuations for the government’s bank equity holdings, which it intends to dispose."

Here's an interesting bit. We know banks have been slow to deal with Buy-to-Lets, parking bad loans in hope that current debtor will part-fund warehousing of BTL properties (via renting them out) until such time when prices rise and bank can foreclose on these. This strategy clearly maximises banks returns and is happy-times for CBofI, concerned with how good banks look on their 'profitability' side. But it is bad news for the economy, where investors (aka ordinary punters) are bled dry of cash to fund BTLs which will never return any fund they 'invested' in them.

IMF basically tells the CBofI and Irish authorities: you have to force banks deal with these BTLs and smaller CRE loans, i.e. foreclose earlier, not later.

And IMF is onto the task: "In view of improved market conditions, the authorities should press banks to broaden their resolution efforts into impaired CRE loans. Banks hold mostly smaller CRE exposures (below €20 million) that were not transferred to NAMA, yet delinquent CRE loans still account for 40 percent of NPLs. Recent strong IBRC and NAMA deal flow points to potential investor interest—although the nature of the assets differ somewhat—and the banks’ portfolios also have relatively high provisioning cover. Staff therefore recommends that banking supervision press forward the restructuring of these NPLs or their disposal in a manner that achieves sufficient deal flow while avoiding flooding markets. Although one bank is exploring disposal options for its CRE loan portfolio, others prefer loan restructuring to retain potential upside and their customer base."

And a handy chart: 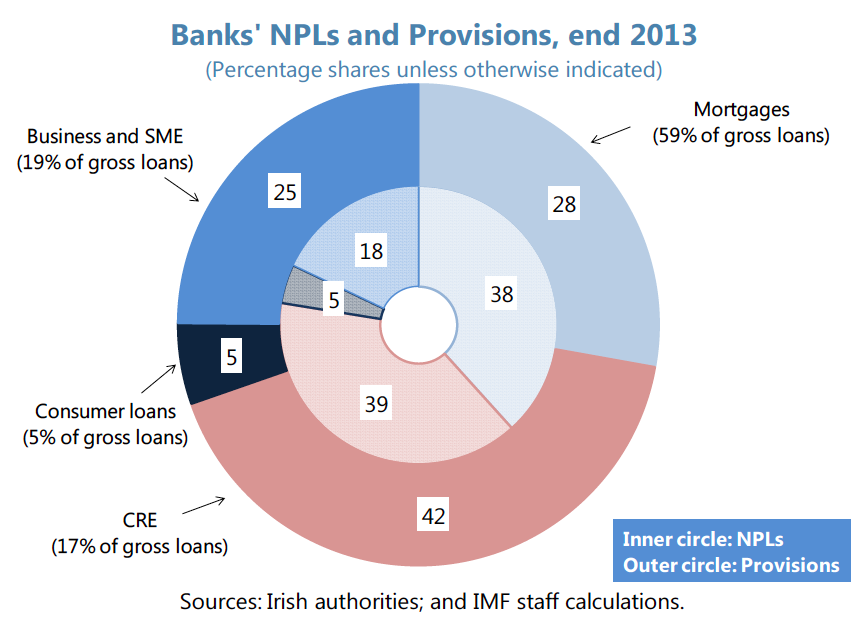 Do notice how weaker provisions cover is delivered on mortgages, while over-provision is a feature of other loans? Priorities… priorities…

SMEs loans are still a huge problem: "SME loan workouts will require ongoing oversight to ensure viability is restored. The two main banks making loans to SMEs report substantial progress in developing workouts for their distressed SME loans, although in practice such workouts will be implemented over some years as restructuring steps by SMEs move forward." Read: the reports are fine, but we won't see full results over some time. Question, unposited by the IMF is: why?

"Recent amendments to the Companies Act facilitating SME less costly examinership procedures are expected to become operational in June, which may be most useful in multi-creditor cases as banks otherwise prefer to conclude workouts outside of the courts."

"Mortgage resolution should be both timely and durable. …Banks report that by end March they had concluded solutions for over 25 percent of primary dwelling and buy to let loans in arrears for more than 90 days." Never mind the rest?.. Oh, by the way - of 132,217 accounts in arrears in Q1 2014, 39,111 accounts are less than 90 days in arrears. Of all mortgages that were restructured (92,442 accounts) only 53,580 accounts are not in arrears following restructuring. Again, IMF ignores this.

"Targeted audits give the CBI comfort that the solutions underway are durable, but reducing reliance on shortterm modifications paying interest only or less remains important." Interestingly, this is what we - IMHO - have discussed in depth with the IMF team. Irish authorities have seemingly no problem with the banks 'restructuring' mortgages by loading more debt onto households and spreading this debt either over greater duration or offering temporary relief from cash flow pressures of this debt.

How sustainable is this? Well, 'targeted audits' might suggest that a household that owed 100K on a property and was unable to fund it at full rate, can be made sustainable with 110K debt over same property but with 3 years worth of interest-only repayments. I am not so sure. Neither, it appears, is the IMF.

Another thing we discussed with the IMF: "Securing constructive engagement by borrowers remains a key challenge to progress, where extending independent advice to borrowers willing to negotiate with lenders may be helpful."

So far, the CBI has given independent advisers no support whatsoever and given the banks no encouragement to engage with such advisers. IMHO has worked closely with some banks to deliver such advice - and we have a proven track record showing it works. But two 'pillar' banks refuse to engage with us and any other independent advisor on any terms, unless the borrowers pay directly for advice out of their own pockets. Even IMF now sees this to be completely nonsensical.

Last bit: "The Insolvency Service is developing a protocol to standardize loan modifications, which could also help." So IMF now endorses idea of standardised solutions. From 2010 on, when mortgages crisis blew up, I campaigned for the state to impose onto banks standardised resolution products, such as loans modifications parameters, arrears capitalisation and write downs parameters etc. The state refused. We at IMHO briefed the Central Bank on the need for such standardisation. Our submissions were ignored.

Posted by TrueEconomics at 4:03 PM