The EU has discovered, at last, a new source of economic growth. Just about enough to deliver that magic 1%+ expansion for 2014 that the economical zombified currency block has been predicting to happen for years now. The new growth will come not from any new economic activity or value-added, but from including into the official accounts activities that constitute grey or black markets - transactions that are often illegal - drugs, prostitution, sales of stolen goods, and so on.

The basis for this miracle is the 2010 European System of Accounts which requires (comes September this year) of all EU states to include in official GDP (and GNP) accounts all "illegal economic actions [that] shall be considered as transactions when all units involved enter the actions by mutual agreement. Thus, purchases, sales or barters of illegal drugs or stolen property are transactions, while theft is not."

Wait a sec. Here's a funny one: stealing property is not a GDP-worthy activity, but selling stolen property is… It is sort of "breaking the leg is not adding to our income, but fixing a broken leg is" logic.

The rational behind harmonised treatment of grey and black markets data is that some states, where things like prostitution are legal, already include these services in GDP calculation, while others do not. Thing are, per EU, not comparable for, Netherlands and Luxembourg because of the Red Lights districts operating in one openly, and in another under the cover. From Autumn this year, all countries will do the same. And they will also add illegally-sold tobacco and alcohol

Prostitution is legal in Germany, the Netherlands, Hungary, Austria and Greece; some drugs are decriminalized in the Netherlands. Italy started to add some illegal activities into its GDP ages ago - back in 1987, the country added to its accounts estimates of the shadow economy: off-the-books business transactions which make up ca 20% of Italian GDP. This boosted Italian GDP by 18% overnight - an event that is called il sorpasso because it drove Italian GDP up to exceed that of the UK.

Poland did same earlier this year, with its GDP about to start covering proceeds from prostitution, drugs trafficking, alcohol and tobacco smuggling. Based on GUS (the CSO of Poland) estimates, in 2010 these accounted for some 1.17% of GDP.

Outside the EU, other countries are also factoring in illicit trade and transactions into their GDP. South Africa has been at this game since 2009, with GDP revised up by a modest 0.2% to take account of unobserved economy.

With 'new activities' added, Italy's GDP is expected to rise 2% in 2014, while French GDP will boll in by 3.2%, UK boost will be 'modest' 0.7%. And so on… Spain's shadow economy runs in excess of 20% of GDP. If bribes (some are voluntary, others can be extorted) are included, Europe's GDP will take a massive positive charge.

Here is the UK note on 'methodologies' to be used in estimating the new 'additions'. It is worth noting that the UK already includes illegally smuggled tobacco and alcohol estimates into its GDP, and these add some £300mln to the economy. Here is the Danish government report on the same, showing smuggling accounting for 2% of GDP adjustment. This is from 2005 when the Government adopted inclusion of some of the illegal activities into its GDP calculations. And dating even further back, the OECD guidebook on inclusion of illegal activities into accounts: here. Here is a fascinating paper from 2007 on Croatia's accession to the EU, meeting Maastricht Criteria targets and inclusion of illegal transactions into GDP.

The net result: deficits and debt levels will officially fall compared to GDP. Even private debts, still rising for now, will see rates of growth slowing down... 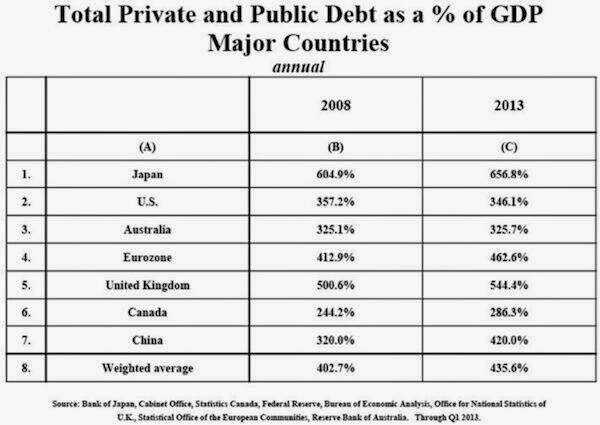 Of course, Ireland's Stuffbrokers have rejoiced at the thought of CSO boosting the GDP by counting in activities that can land one in jail. Per Irish Examiner report (here): "Davy chief economist Conall MacCoille said while the inclusion of the statistics might help the Government reach its deficit target of 4.8%, the activity is contributing nothing to the exchequer. “Of course we are delighted to see the CSO capture as much economic activity in the GDP figures as possible, but the fact is that this activity is not taxed. If might help push up the GDP figure, but it will not contribute anything to the exchequer,” he said."

Read: Happy times (higher GDP) could have been even happier (tax revenues boost), but we'd settle for anything that might push up the value of Government bonds... (Who's one of the largest dealers selling said bonds?...)

Thus, do expect congratulatory statements about 'austerity working', 'reforms yielding benefits' and 'recovery taking hold' blaring out of radio and TV sets next time pass the 'Happi-Ending' Massage Parlour or a methadone clinic…

Posted by TrueEconomics at 5:35 PM