Much has been made in the media on the foot of the latest (April 2012) data for residential property prices in Ireland.

In light of this, let's do some quick analysis of the data. The core conclusions, in my opinion are:


So caution is warranted. 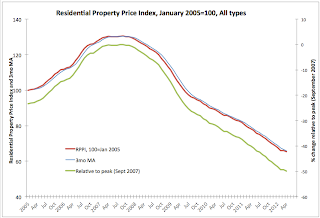 Chart below shows sub-indices performance for houses and apartments. While it is clear that houses sub-index is the driver of overall prices, the apartments sub-index received much of attention in recent months. The reason for it is two consecutive months of increases in apartments prices. Details are below: 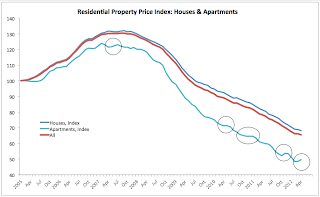 Conclusion: any talk about 'price trends improvement' in apartments will have to wait for further confirmation of the upward trend.

Chart below shows trends for prices in Dublin - another focal point of attention for those claiming substantive change in property prices trends. 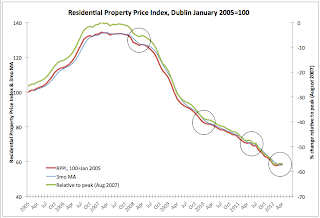 Overall, all data points to potential stabilization that is in a very nascent state. However, this is certainly a local phenomena for now - with Apartments and Dublin properties showing some potential signs of improvement. Only the future can tell if: