With both Services and Manufacturing PMI data out last week, time to update some charts. This post will deal with core trends in manufacturing PMIs, following by posts covering core data in Services PMIs, employment trends and profitability trends. 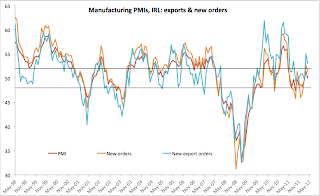 Thus, out of all 3 core indices, only one - New Export Orders - is consistent with growth. On the positive side, however, all three indices have deteriorated on March, but remained above 50 in nominal terms. 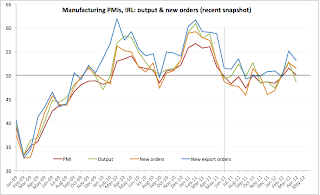 The trend of flat - on average virtually zero growth - in all four series continues since June 2011.

All other core sub-indices are underperforming as well: 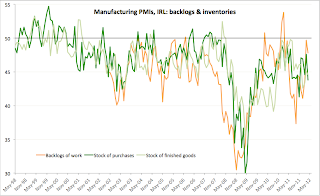 The gap between input and output prices is staying wide, implying continued pressures on profit margins (to be covered in a separate post), while employment outlook improved from 51.2 in March to 52.9 in April. 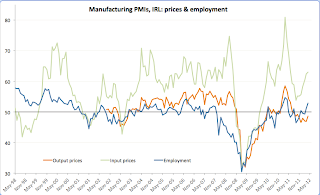 All core series show flat trend at below 50 since, roughly June 2011.

Posted by TrueEconomics at 10:27 AM