An excellent article for Bloomberg by Peter Boone and Simon Johnson, titled As European Austerity Ends, So Could the Euro.


In addition to Table 5 in the GFSR (linked by Boone and Johnson), I suggest you take a look at the Statistical Table 9.a on page 69 of the report, especially columns 2-5. These detail parameters of sustainability of unfunded future health and pensions obligations.  Ireland, with its 'demographic dividends' is fourth worst-off country in the EA17 in terms of future pensions liabilities increases, although we are much better than average in terms of health liabilities.


Table 10.a page 71 of the said report (reproduced below) shows that Ireland is facing the worst
Required Adjustment and age-related spending, 2011–30 and 2011-2020 horizon in the advanced economies, save for Japan and the US. 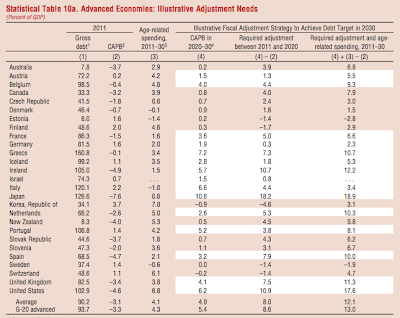 Posted by TrueEconomics at 6:24 AM

My latest take on it all. BOH.