Q1 2012 global gold demand figures were published last week and, surprise, surprise, there has been some decline in investment components of demand. Predictably. What is surprising, however, are the dynamics. For some time now we've been hearing about the gold bubble and about recent price moderations being the sign of the proverbial 'hard landing'. Sorry to disappoint you, not yet.

Let's chart some data and discuss:

Source: Author calculations based on Gold Council data (same for charts below)

Conclusion out of the table: no drama. As expected - physical demand is still ahead of average, but moderating gradually. Jewellery demand is above average - a massive surprise for those who use this demand component to argue that decline in jewellery demand shows that gold is a bubble driven solely by investment objectives. Within investment gold: ETFs are becoming less relevant (more speculative component) while gold bars and coins (less speculative, more 'long-hold' component, especially on coins side) becoming more important. 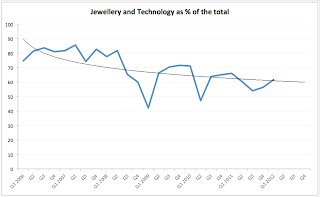 Next two charts plot relationship between price and volume demanded by specific category: 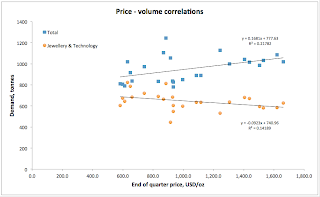 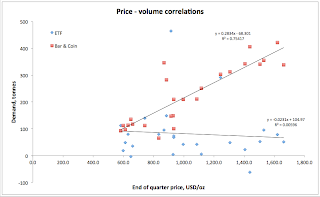 Notice the following:
So what is happening on the demand side of gold markets, then? Here are my views:

Disclaimer:
1) I am a non-executive member of the GoldCore Investment Committee.
2) I am a Director and Head of Research with St.Columbanus AG, where we do not invest in any individual commodity.
3) I am long gold in fixed amount over at least the last 5 years with my allocation being extremely modest. I hold no assets linked to gold mining or processing companies.
4) I have done and am continuing doing academic work on gold as an asset class, but also on other asset classes. You can see my research on my ssrn page the link to which is provided on this blog's front page.
5) I receive no compensation for research appearing on this blog. Everything your read here is my own personal opinion and not the opinion of any of my employers, current, past or future.
6) None of my research - including that on gold - should be considered as an investment advice or an advise to buy or invest in any asset or asset class.
Posted by TrueEconomics at 3:36 PM