Latest research from ESRI shows that, contrary to the prevalent opinion in the media and official circles labour earnings in Ireland have been rising, not falling, during the early years of the crisis. This trend, on the surface, appears to contradict claims of wages moderation in the private sector, the very same claims that have been repeatedly used to argue that structural reforms and changes in Ireland during the crisis have seen a dramatic return of productivity growth.

The ESRI research, carried out by Adele Bergin, Elish Kelly and Seamus McGuinness used data from the National Employment Surveys on the changes in earnings and labour costs between 2006 and 2009. Per authors, “despite an unprecedented fall in output and rise in unemployment, both average earnings and average labour costs increased marginally over the period.”

Surprising for many outside the economics profession, these findings actually confirm what we know from Labour Economics 101.

Firstly, wages and earning are sticky when it comes to downward adjustment. In other words, while wages inflation can be rampant, wages deflation is a slow and economically painful process. This is precisely why currency devaluations are always preferred to cost deflation (or internal devaluations) as the means for correcting recessionary and structural imbalances.

Secondly, wages deflation  is even slower in the economies where collective bargaining is stronger. Ireland is a strong candidate for this with its Social Partnership and tenure-linked pay structures.

Thirdly, average earnings movements reflect not only changes in wages, but also changes in the composition of the national and sectoral employment. More specifically, as the ESRI study concludes, the core drivers of rising earnings during 2006-2009 period were “increases in both the share of and returns to graduate employment and a rising return to large firm employment”. Of course, both of these factors are correlated with the destruction of lower-skilled and less education-intensive construction and domestic services jobs.

Lastly, increases in part-time employment also drove up average earnings. In fact, the latest figures from the Eurostat show that a total of 7.4% of our currently employed workers are classified as part-time employees willing to work longer hours, but unable to secure such employment. This is the highest proportion in the entire EU27, and well above the 3.9% reading for Greece.

Overall, ESRI researchers concluded that “a good deal of the downward wage rigidity observed within Irish private sector employment since the onset of the recession has largely been driven by factors consistent with continued productivity growth.”

In my opinion, this is not a foregone conclusion. Irish labor productivity may have risen during the period of the crisis, but much of that increase is probably accounted for by the very same four forces that drove increases in earnings. Higher proportion of jobs in the economy within the MNCs-dominated exporting sectors, higher survival rate for jobs requiring higher skills, and the nature of the early stages of public sector employment cuts most likely simultaneously explain changes in both earnings and productivity.

The latter aspect is worth explaining. In the early part of the crisis, all public sector employment reductions took place out of cuts to part-time and contract positions, thus most heavily impacting lower earning younger workers. This would simultaneously increase the proportion of higher paid public employees and the average productivity in the sector. Post-2009, cost reductions have been running via early retirement schemes, but these are not reflected in the 2009 data.

In other words, on the surface, it might appear that Irish labour productivity has grown over time, but in reality, it is the reduction in less productive workers’ employment that has been driving these ‘improvements’. Incidentally, this story, not the ESRI conclusion, is consistent with the situation where domestic economic activity has contracted more than domestic employment.

In brief, our ‘productivity gains’ outlined by the ESRI might be a Pyrrhic victory in the Irish economy’s war for internal devaluation.

And the said victories continued since 2009 – the period not covered in the ESRI study.

Since January 2010, earnings have been falling in Ireland as jobs contraction became less pronounced and as public sector entered the stage of early retirement exits. Irish average hourly labour costs peaked at €28.0 per hour in 2009, 5.7% above the Eurozone average. In 2011, however, the average hourly labour cost in Ireland stood at €27.4 per hour, 0.7% below Eurozone average. If in 2009 Ireland had the eighth highest average hourly cost of labour in EU27, by 2011 we were 11th most expensive labour market.

According to the Eurostat, across the Irish economy, labour costs rose 7.7% in 2007-2009 period followed by a drop of 1.6% in 2010-2011. However, over the period of the entire crisis, the labour costs are still up 5.2%. The only good news here is that our euro area competitors have all posted higher labour costs inflation. The same pattern is repeated in Industry, Services and across the Public Sectors. Only ICT and Financial Services broke this pattern, driven by fixed wages in the state-owned domestic banking, robust demand for IFSC and ICT specialists. In Professional, Scientific and Technical Activities, earnings rose 6.3% between 2007 and 2011, with wages moderation kicking in only from 2010 with a relatively strong decline of 4.8%. Still, this is just half the rate claimed in the official promotional brochures extolling the virtues of decreased labour costs in this area in Ireland.

With relative stabilization of unemployment and longer duration of joblessness, our average earnings are now set to decline over time as younger educated workers come into the workforce to replace retiring older workers. In the mean time, our productivity metrics will continue to improve in specific MNCs-dominated exporting-heavy sub-sectors. Competitiveness will improve, but not because real productivity will expand. Instead, continued re-orientation of economy toward MNCs will drive headline numbers as we become more and more a tax haven, rather than indigenous entrepreneurship engine.

These accounting-styled gains in productivity and cost competitiveness are likely to coincide with stagnation of Ireland’s GNP. In the period since 2007, Irish after-tax earnings have actually suffered significant deterioration compared to our counterparts in Europe. This deterioration is strongly pronounced for demographically most productive part of our workforce – those in the 25-45 years of age.

With decline in net after-tax earnings, Irish economy is now facing a number of pressures. Costs of living, commuting and housing are likely to continue rising in months and years ahead, driven by the state desire to extract more in indirect taxation and the market structure that is largely captured by the less competitive state enterprises and defunct banks. Direct tax burden will also continue to rise, while pre-tax earnings will fall. These pressures will imply further reductions in consumer spending and domestic savings. The latter means, among other things, that we will see renewed pressure on banks (as part of our savings reflects repayment of household debts) and on domestic investment. 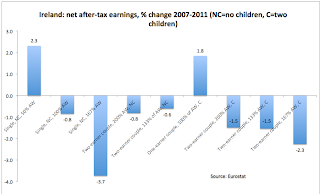 "The latter aspect is worth explaining. In the early part of the crisis, all public sector employment reductions took place out of cuts to part-time and contract positions, thus most heavily impacting lower earning younger workers. This would simultaneously increase the proportion of higher paid public employees and the average productivity in the sector. Post-2009, cost reductions have been running via early retirement schemes, but these are not reflected in the 2009 data."

Hi Dr Gurdiev
Although i think you are close I think you are not quite hitting the nail on the head with regard to the reasons for the increase in Labour costs over the time.

I have done a little work on examining employment rates and emigration of people in their 20's from 2007 to 2011.

Of the 300,000 jobs lost in the economy over that time the group that fared worst by a long way was the young.
There were 227,000 less people in their 20's working in the economy in 2011 than 2007.
You mention above the public sector but actually and surprisingly to me the same behavior happened to a much greater extent in the private sector. Employers kept their older more "valuable" more expensive employees and got rid of their younger employees.

I agree. private sector adjustments relative to seniority were also to lay off younger workers in many sectors. The reason for this was not so much differential productivity, but the structure of the redundancy. This was amplified with the cuts to the redundancy payments rebates. I wrote about this as well on a number of occasions.