The risk-off thingy is starting to bite - with a few frantic calls over the weekend from across the Atlantic. People are shifting strategies like feet in Swan Lake's pas de deux. Here's an nice set of charts that shows we are in a precarious starting point to the risk-off market indeed.

The Yale University Crash Index - latest data takes us only through April, shows that the base off which we have entered May markets is already loaded with high risk: 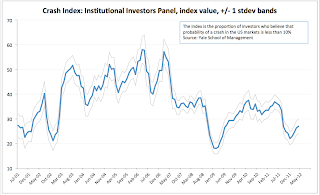 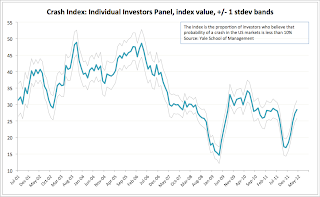 One interesting bit - disregarding the issue of lags, historical correlation between two indices is 0.76 while crisis period correlation is 0.82, which suggests that May reading should come down like a hammer for individual investors. The same is confirmed by looking at changes in indices volatility. Standard errors for Institutional investors responses have compressed from historical 3.82 average to crisis period 2.99 average to 2.85 average for the period since January 2011. Similarly, for individual investors, historical average standard error is 3.36, declining to 2.731 for crisis period and 2.724 average since January 2011.