Chart below shows nominal values of General Government expenditure, in billions of euros. 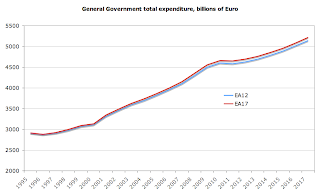 Oh, yes, and the trend continues into 2017 projections by the IMF.

In family analogy, 'Darling, with one of our jobs lost, try not to buy a fancier Gucci bag, next time you go out for groceries!'
Posted by TrueEconomics at 7:20 AM

Is it really "try not to buy a Gucci bag"?

If you look at Ireland, between 2006 and 2011 current expenditure went up every year. But if you subtract money going to Social Protection (which includes increases in welfare payments) and money spent on servicing our debt, the rest of current expenditure dropped in 2009 and 2010. (I'd look at 2011, but the White Paper for 2012 didn't include a breakdown of 2011 spending that is readily comparable).

So it might be, "buy cheaper groceries darling, we need money for the kids and the credit card debt has us crippled"? Are there any euro expenditure figures where unemployment payments are omitted?

There are two points worth making:

1) The first measure, Gov spending as a % of GDP, was always going to increase as GDP decreased since the crisis