When first published, the Fiscal Compact (formally known as the Treaty on Stability, Coordination and Governance in the Economic and Monetary Union) was billed as a ground-breaking exercise in European legislative activism. The main innovation of the treaty was not its content (which largely regurgitates already existent fiscal constraints established under the Maastricht Treaty), but its compact size and designed-to-be-digestible language.

Few months down the road, and the Fiscal Compact has become a subject to numerous conflicting claims and interpretations, thanks to both side of the referendum debate in Ireland. Mythology that surrounds the Fiscal Compact is impressively wide and growing. The fog of politicised sloganeering and scaremongering on the ‘Yes’ side is well matched by the clouds of emotive and quasi-economic nonsense from the ‘No’ camp.

The main alleged problem with the Compact is that its core rules – the 60% debt/GDP limit for Government borrowings, the 1/20 adjustment rule for dealing with excess public debt, the 3% deficit ceiling and the 0.5% structural deficit break – amount to prohibiting of the Keynesian economic policies in the future. This argument is commonly advanced by the Fiscal Compact opponents and implies that in the future crises, Ireland will not be able to use stimulative Government spending to support its economy.

In practice, however, Fiscal Compact restricts, but not eliminates the room for deficit financing. In the current economic conditions, under full compliance with the deficit rules, Irish Government would have been able to run a deficit of at least 2.97% of GDP – much lower than 8.6% targeted under Budget 2012, but close to 3.2% deficit forecast for 2012 for the euro area.

Far from ‘killing Keynesianism’, the Fiscal Compact induces in the longer run fiscal policies that are consistent with Keynesian economics. Any state that wants to secure a ‘fiscal stimulus’ cushion for future crises should accumulate surplus resources during the times of economic expansions, not rely on the goodwill of the bond markets to supply debt financing to the Governments when their economies begin to tank.

The treaty does limit significantly the state capacity to accumulate debt in the future. In the long run, debt to GDP ratio should converge to the ratio of average deficits to the long-term growth potential. Based on IMF projections, our structural deficit for 2014-2017 will average over 2.7% of GDP, which implies Fiscal Pact-consistent government deficits around 1.6-1.7% of GDP. Assuming long-term nominal growth of 4-4.5% per annum, our ‘sustainable’ level of debt should be around 36-40% of GDP. Although no one expects (or requires) Ireland to draw down our public debt to these levels any time soon, over decades, this is the level we will be heading toward if we are to comply with the Fiscal Compact rules.

On the ‘Yes’ side, the biggest myth concerning the Fiscal Compact is that adopting the treaty will ensure that no more fiscal crises the likes of which we have experienced since 2008 will befall this state.

In reality, the collapse of exchequer finances in Ireland has been driven by a number of factors, completely outside the matters covered by the Fiscal Compact.

Firstly, significant proportion of our 2008-2011 deficits arises from the state response to the banking sector implosion and closely correlated property sector collapse. The latter was also a primary driver for the decline in tax revenues. The former was a policy choice. Thirdly, our deficits were driven not just by the fiscal performance itself, but also by the unsustainable nature of our government spending and taxation policies. For example, during the boom, Irish Governments consistently acted to increase automatic payments relating to unemployment and social welfare financed on the back of tax revenues windfall from property transactions. Property revenues collapse coincident with increases in unemployment has led to an explosion of unfunded state liabilities.

None of these shocks could have been offset or compensated for by the Fiscal Compact-mandated measures. In fact, during the 2000-2007 period, Irish Governments’ fiscal stance, on the surface, was well ahead of the Fiscal Compact requirements. Ireland satisfied EU Fiscal Compact bound on structural deficits in all years between 2000 and 2007, with exception of two. Of course, in all but one year over the same period, we also failed to satisfy the very same bound if we were to use the IMF-estimated structural deficits in place of those estimated by the EU, but that simply attests to the difficulty of pinning down the exact value of the potential GDP, required to estimate structural deficits. We also satisfied EU-mandated debt break in every year between 2000 and 2008. In fact, between 2000 and 2007 our debt to GDP ratio was below 40% - the benchmark consistent with long-term compliance with the Fiscal Compact. More than fulfilling the requirement for a 3% maximum Government deficit, Irish Exchequer run an average annual net surplus of 1.97% of GDP, accumulating 2000-2007 period surpluses of €11.3 billion and the NPRF reserves which peaked in Q3 2007 at €21.3 billion.

In short, the Fiscal Compact is not a panacea to our current crisis, nor is it a prevention tool capable of automatically correcting future imbalances, especially given the difficulty of forecasting future sources of risk.

Instead, Ireland needs a combination of institutional reforms to enhance our domestic capacity to identify points of rising risks and to deploy policies that can address these risks in advance. A flexible and highly responsive early warning system, such as a truly independent Fiscal Advisory Council, coupled with reformed Civil Service, aiming at achieving real excellence and accountability within the key Departments and regulatory offices can help. Furthermore, abandonment of the consensus-focused systems of governance, eliminating the expenditure-centric Social Partnership and the Dail whip system, and reformed legislative and executive systems to increase the robustness of the checks and balances on local and central authorities, are needed to develop capacity to respond to emerging future crises. Legal reforms, to address the imbalances of power of the vested groups, such as bondholders or state monopolists, vis-à-vis the taxpayers, are required to prevent future bailouts of private and semi-state enterprises at the expense of the Exchequer. Local authorities reforms are required to ensure that the madness of over-development and land speculation do not build up to a systemic crisis. Taxation reforms are needed to stabilize future revenues and develop an economically sustainable tax system.

The Fiscal Compact is a wrong policy for all of the above because it risks creating a confidence trap, which can replace or displace other reforms. It represents a wrong set of objectives, as it diverts state attention from considering the nature of underlying imbalances. It also re-directs much of the fiscal responsibility away from Irish authorities, potentially amplifying the reality gap between the real economy and the decision-makers. By endlessly blaming Europe for tying Government’s hands, the Compact will continue building up voters’ perception disenfranchisement, fueling stronger local political orientation toward parochialism and narrow interests representation, while alienating voters from European institutions.

In short, the Compact is not an end to the politics as usual. This, perhaps, explains why no independent analyst or politician is prepared to vote in favour of the new Treaty except under the threat of the Blackmail Clause contained not in the Fiscal Compact itself, but in the forthcoming ESM Treaty and which requires accession to the Treaty on Stability, Coordination and Governance in the Economic and Monetary Union as a pre-condition for gaining access to the ESM funds. Not exactly a moment of glory for either Europe or Ireland. 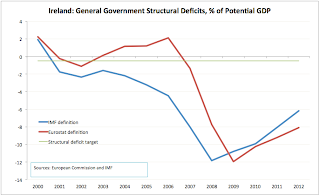 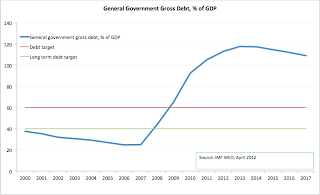 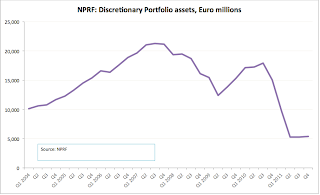 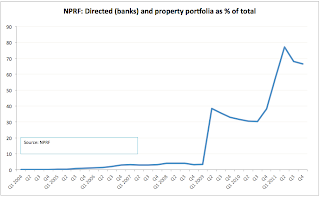 By now, we have become accustomed to the endless repetition of the boisterous claims that the continued declines in Government bond yields since mid-2011 signal the return of the markets confidence in Ireland. Alas, based on the last two months worth of data, things are not exactly going swimmingly for this school of thought. Based on weekly data, Irish benchmark 9-year bond yields spreads over Germany have contracted sharply in year on year terms, falling on average 1.30 percentage points since March 1, 2012 and 1.26 percentage points in April. The former is the second best performance in the euro zone after Italy, and the latter marks the third best performance after Italy and Portugal. Alas, weekly changes have been much less impressive. Since March 1, our yields have actually risen, in weekly terms, with an average rate of increase of 0.02 percentage points. For the month of April, the same metric stands at 0.05 percentage points. The same performance pressure on Ireland is building up in the Credit Default Swaps markets, with our 5 year benchmark CDS spreads declining just 0.24 percentage points compared to Portugal’s 5.2 percentage points drop since a month ago. Overall, European CDS and sovereign bonds markets are now signalling the exhaustion of the positive momentum from the December 2011 and February 2012 LTROs. Ireland’s bonds and CDS are no exception to this rule, suggesting that the ‘special relationship’ that we allegedly enjoy with the markets might be now over.
Posted by TrueEconomics at 10:25 AM

I'm part of an organisation, Sensible Money, promoting knowledge of how digital banking affects the economy.

I see you have a good handle on the effects of the treaty both short term and long term. However, I'm more concerned with what appears to be a misunderstanding of the effect of runaway national debts on the economy.

What has happened in recent decades is the opposite. The Government has collected some money through revenue and spent it all back into circulation plus a bit more, which it borrows. This has been completely necessary to keeping us trading relatively well. The reason being that money entering the economy through the national debt feels like debt-free money. It is money which businesses and households haven't had to borrow into existence and yet it circulates between them. Far from being the cause of any problems, runaway national debts have been completely necessary to keeping this system of money creation functioning reasonably well.

If you'd like me to explain more you can find me at the URL linked to my identity.

It seems clear that the language of the Fiscal Treaty is designed to alienate citizens as it is impossible to decipher. For such a critical document it seems extraordinary that citizens are expected to vote...or to put it another way...to sign their names to a document with massive economic implications for the country. It would appear that we are being asked to finalise the signing off of the handover of the financial control of Ireland's economy to foreign forces. Now while on the one hand, we might feel inclined to welcome German fiscal management since our own people were so incompetent...on the other hand what would change if we voted NO and left the governance of the finances of Ireland once again in incompetent hands? It is an invidious position for the Irish people but surely we should consider taking the pain in one painful sharp shock and hold onto our hard won independence? How can we just stand back and hand over our economy and copperfasten the banking debt into fiscal debt without a murmur? By so doing we will betray the future generations.