This week, Irish Times have ventured to cover gold in an article titled “The carat and stick approach to investment".

Please see my disclaimer at the bottom of this post.

We can debate the semantics of the Irish Times headline, but the ‘stick’ suggests some sort of compulsion for investors to purchase gold.

In reality, few dealers in Ireland actually offer direct access to properly stored gold at an affordable margin. I have not seen any ‘Buy Gold, or Else...’ marketing campaigns, comparable in the force of conviction or compulsion to the tsunami of sell-side promotions unleashed onto Irish investors in property and banks shares in the recent past. Irish Times does not have a dedicated portal 'MyGold.ie' or a special 'Buy Gold' supplement where gold dealers can advertise their coins, nuggets, bars, etc. When gold is covered on the pages of the Irish business press, it is almost invariably painted in apocalyptic terms.

In-line with this tradition, the article opens on a horror story of a young couple living on a council estate, all their savings in gold, stored on-site. One has to wonder if Irish Times writings on, say, pet ownership always relay bone-chilling tales of killer pooches attacking unsuspecting elderly owners. One has to wonder, because a gold bar has about as high probability of ending up under the mattress in a council dwelling as an average retiree faces the threat of being mauled by a man-eating Chihuahua.

I actually agree with the article implied thesis that no investor should be advised to put all their savings into gold or any one specific asset or asset class. Such an atrocity of mis-selling should never befall a retail investor.

However, prudent risk management does imply, in my view, that investors should hold a relatively fixed percent of their invested wealth allocation in gold. Not for speculative reasons, but for risk hedging reasons to cover over the long run wealth volatility induced by other assets and the adverse effects of inflation.

There’s a point about Gold being a rollercoaster-styled investment vehicle compared to stocks and bonds, raised in the article. Indeed, gold prices show high volatility. Less so on the semi-variance side (downside) than on the overall variance side (downside and upside). And less on geometric weighting (that concern wealth preservation) than on arithmetic (the one that is more suited for short-term returns comparatives), but this is too nuanced for a newspaper article.

The Irish Times seems to be unaware of the ‘survivorship bias’. Over the time horizon glimpsed across by the article, many investments in stocks and bonds have gone in value from ‘hero’ to ‘zero’, as companies went bust, sovereigns and local issuers of bonds defaulted or restructured, currencies disappeared and hyper-inflation bouts have demolished the value of assets, banks deposits have been lost, and so on. Pesky gold ‘relic’ is still here.

There is a priceless moment in Simpsons where Montgomery Burns checks his ticker tape to discover his Confederated Slave Holdings has gone bust. On a more serious note, Nassim Taleb wrote books and academic peer-reviewed articles on the stuff. And Taleb also brings up the value of gold as a hedge against such risks.

Irish Times frequently quizzes serious economics luminaries from stockbrokers and real estate agents. And with clear disdain, the article references the opposite sort – the ‘pop economists’. Let's take a look at some of those using historical valuations / references for highlighting gold’s functions in the real world:

Yes, there is much of a debate going on the virtues and pitfalls of gold as an investment vehicle or a monetary base. Yes, both sides of the argument have serious research behind them. But that is not what the Irish Times article portrays. Instead of presenting a debate, or actual evidence on the dangers of over-investing in an asset class, the article draws an extremely selective depiction of reality framed in derogatory terms.

Meanwhile, the article description of various gold investment vehicles is incomplete, omitting, for example, the fact that some gold ETFs are synthetic, rather than physical gold-backed, and that some products available in the market allow to purchase gold on price-averaging basis, reducing exposure to price volatility.

A ‘rollercoaster’ investment vehicle that is gold is the only asset in existence that actually provides a risk hedge and a safe haven over long-term structural adjustments and short-term fluctuations across the majority of other asset classes, including stocks. If the Irish Times want proof of this, they can read research on the topic available on ssrn or repec or econlit. Professor Brian Lucey, researcher and lecturer Fergal O’Connor and myself are co-authoring on a database of studies on gold as an asset class, its properties, behavioural implications and empirical analysis, which is available at http://preciousmetalsresearch.wordpress.com/.

There is a priceless bit in the article on determination of an asset bubble. The author logic goes as follows: “In 2007, more than 80 per cent of the demand for gold was for jewellery and industrial use, while less than 20 per cent of demand was from investors. By 2009, this had changed dramatically. Investment demand had risen to 43 per cent of the total. The rise in demand from investors raises the question as to whether speculation is a key driver of the gold rally.”

This does a number of things:

Let me provide some more numbers: 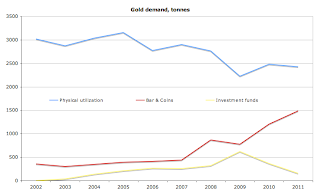 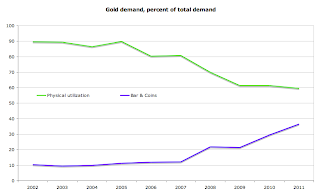 Drama all around, unless you look slightly deeper into demand drivers.

Physical gold demand has been abating over the 2000s primarily due to diversification in jewellery demand away from gold (rise of prominence of platinum during the years of 2002-2007 and silver in the latter years, driven by tastes and price effects, plus recession-related income effects and tax and local currency considerations). A quick read through demand drivers analysis from the World Gold Council would help here.

In addition, it is wrong to classify sales of bars and coins as ‘speculative’. Behavioural studies suggest that sales of bars & coins are driven strongly by savers, rather than traditional speculative investors. These ‘savers’ are more often than not wealthier individuals (especially in the case of bars buyers) who tend to hold both instruments over longer horizon. Coins holdings are even less sensitive to price changes than demand for bars. For example, coins demand for US Mint Eagles has spiked around 1997-2000 with no reaction in the coins price. I doubt even the Irish Times would have spotted a bubble there. (chart). 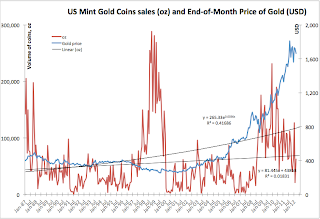 These are not to be ignored, as roughly 20% of the investment gold demand is accounted for by coins and medals.

Lastly, one has to distinguish between speculative (capital gains-driven) investments and short-term risk management objectives (such as flight to safety or flight to quality considerations). These factors are hard to control for, but smoothing demand for investment gold in 2008 and 2011 – the two core years of the crisis, using historical trend suggests that the ‘hedging’ demand for gold to cover the spikes in markets volatility around the equities and sovereign crises peaks accounts for about 9-10% of total gold demand at the end of 2011.

A quick note below the post does some back-of-the-envelope illustration on price-demand links.

In brief, the issue of gold valuation is complex and very much open to the debate. I, personally, have no opinion on whether gold price today is a bubble or not. It might be, it might be at the beginning of the bubble formation or at the tail end of it. I have no idea. Nor do I have any idea where the gold price will be in 3 months time.

What I can say is what I keep repeating any time someone asks me about gold: gold is a wealth management tool suited for risk hedging and wealth preservation, not for chasing speculative gains.

Disclaimer:
1) I am a non-executive member of the GoldCore Investment Committee.
2) I am a Director and Head of Research with St.Columbanus AG, where we do not invest in any individual commodity.
3) I am long gold in fixed amount over at least the last 5 years with my allocation being extremely modest. I hold no assets linked to gold mining or processing companies.
4) I have done and am continuing doing academic work on gold as an asset class, but also on other asset classes. You can see my research on my ssrn page the link to which is provided on this blog's front page.
5) I receive no compensation for research appearing on this blog. Everything your read here is my own personal opinion and not the opinion of any of my employers, current, past or future.
6) None of my research - including that on gold - should be considered as an investment advice or an advise to buy or invest in any asset or asset class.

Note: using annual data we can look at the relationship between demand for gold by various types and prices. Chart below illustrates. 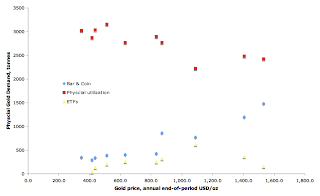 Posted by TrueEconomics at 5:01 PM

If the Gold fall was real, why is the Swiss Franc stable?