Previous post dealt with the high level trends in Manufacturing PMI for Ireland. In this post we look at the core data for Services PMI.

Back in March, markit - the agency releasing Irish PMI data for NCB - headlined the changes in the Services index with a rather bombastic "Growth of Activity Sustained in March, and Optimism Hits a 22-month High". Of course, such was the booming time in Irish economy a month ago.

Fast forward one month to April and the headline remains bombastic: "Activity Growth Maintained in April as New Business Rises for Third Month Running"... Ok... so...

Headline PMI in Services (Business Activity index) improved from 52.1 in March to 52.2 in April, which is good news nominally, but statistically still indistinguishable from 50. Good thing is, the moving averages are a bit stronger along the just-above-50 trendline. 3mo MA is at 52.5, 12mo MA at 51.3, and 3mo MAs for 2011 and 2010 are all below the current running at 52.1 and 49.8 respectively. So business activity is indeed somewhat on the rise, albeit a very shallow rise. 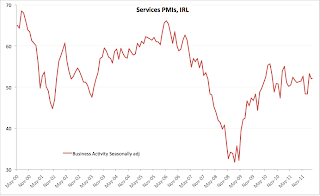 Overall, headline Services Activity has been running on average above 50 since June 2009. Anyone noticed the boom, yet? 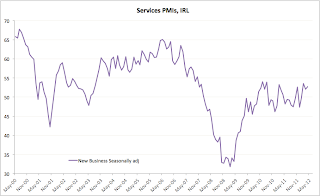 Again, trend pattern in New Business sub-index is identical to the pattern in overall Business Activity index - flat just above 50 since, roughly Q2 2011. The snapshot of more recent data illustrates, next. 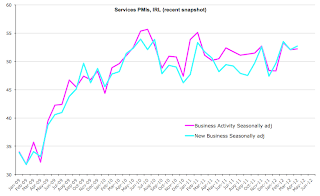 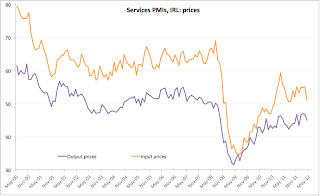 As mentioned earlier, Profitability remained in the contraction territory, posting a reading of 47.5 in April, worse than 47.9 in March. Last time Profitability sub-index posted a reading above 50 was in December 2007. 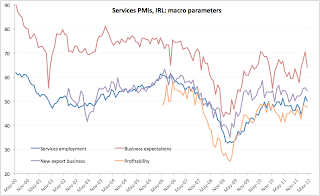 Confidence slipped to 64.1in April 2012  from 70.4 in March. The series reading is now at 3mo low, but ahead of 12mo MA of 62.5. 3mo MA through April is very strong 67.1, while 3mo average through April 2011 was 66.5 and for 2010 period it was at 64.2. Overall, business confidence is relatively inflated indicator, as shown in the chart below. The indicator has relatively strong coincidental connection - in historical data - to the same period Business Activity index. 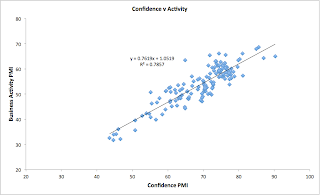 Overall, Services PMIs are showing stronger performance in the sector than in Manufacturing, but the numbers are more volatile and trending along the flatline. Business expectations continue to out-perform actual activity and exports orders, although this is hardly a new trend. With profitability severely constrained and actually deteriorating, I wonder if the 50+ readings in the last two months in Employment sub-index are credible.
Posted by TrueEconomics at 7:21 PM