Latest mortgages arrears data from the CB of Ireland came in with a slight surprise that most of the media should have anticipated. During the launch of the annual report, the CBofI has pre-leaked some of the top-level figures for arrears, with media reports of 10.5% (or ca 80,000) of mortgages in arrears expected in Q1 2012 figures. Of course, given the usual tactic of first exaggerating, then underwhelming (presumably there's some psychological strategy working its magic somewhere here), it should have been expected that actual numbers - bad as they may be otherwise - will 'surprise' to the positive side relative to the leak-related expectations. It might have worked.

Alas, the end numbers - whether or not they are better than leaked out 'estimates' - are pretty dismal.

In Q1 2012, there were 764,138 mortgages outstanding amounting to €112,688.5 million. The latter number is €789 million down on Q4 2011 and€3.27 billion lower than Q1 2011 figure. So in 12 months, with foreclosures and restructuring factored in, Irish mortgagees were able to pay down just 2.82% of the mortgages outstanding. This is not exactly a massive rate of de-leveraging for heavily indebted households. 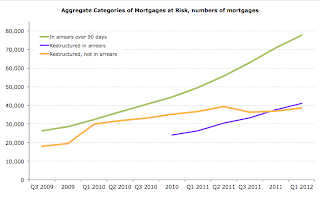 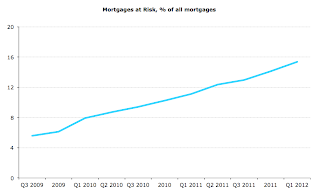 Note: more on this next week.
Posted by TrueEconomics at 5:36 PM

How about this idea
http://www.guardian.co.uk/world/2012/may/27/irish-dodge-debts-uk-bankruptcy-tourism

Its not over yet

Is it possible to get a better breakdown of the numbers ? By calculating a pretty crude percentage of mortgages in trouble over total mortgages subdivided by a timeline doesn't really get to the heart of the issues. What we reqlly require is some sense of when these mortgages originated and their default/stress equally some level (albeit expectedly crude) of negative equity size by origination date. Again this will give readers a better understanding as to the nature of those actually in distress. Broken down by origination date will give everyone a better feel as to what the likely write offs/deals will have to be done to get to the bottom of the issue in terms of right sizing loans and realistic property values. The analysis at the moment is marginally useful but leaves many questions - I would have thought that a better analysis will reveal distress levels in the origonation years from 2003 to 2008 as 3to 4 times the 'average'.