It's been a while since I updated the Live Register figures, and given that some fresh data was released this week, I think it's time to revisit the trends. 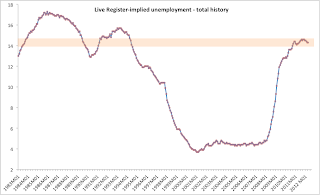 So far, crisis-period average LR-implied unemployment rate is 13.8% - still below that for April 2012, although with STDEV of 1.3 we are getting closer and closer to the statistically average rate. Crisis-period average monthly movement in the LR-implied unemployment is 0.14 percentage points, so with zero movement in April 2012, things are better than average. April 2012 marks 6th consecutive month during which the implied unemployment did not rise, of which exactly 3 months have seen zero change in unemployment and 3 months say declines of 0.1 percentage point. So as can be seen pretty clearly, January-April 2012 trend is not exactly encouraging, but on the 'glass half-full' side, it is also not exactly severely disappointing either. 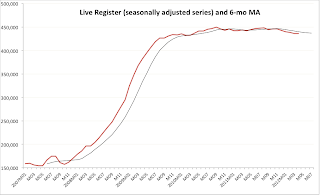 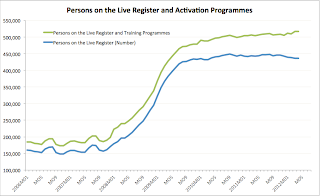 Alas, as the above figure illustrates, the good news on LR are clearly offset / accounted for by aggressive reclassification of assistance recipients into training programmes. Before you start biting off my head, let me clarify - training and re-training is good, but until the person exits the programme and gains a job, in my opinion, it is dishonest to claim that this person is not unemployed. So, per chart above, if we add March 2012 (latest) data for state training programmes participation numbers, we get 517,440 persons on the live register and in state run training programmes in April (against 517,340 in March). That is a rise of 12,694 y/y (+2.51%).

Chart below shows the LR struggle to break out of the flat trend since Q4 2010 that continues to-date. 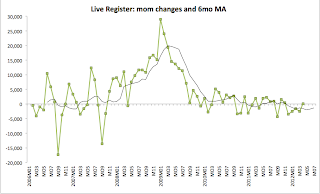 The following post will look into some sub-trends in the LR composition.

Posted by TrueEconomics at 6:06 PM