In the last two posts I covered headline index readings for Manufacturing PMI and Services PMI for April 2012. In this post, I am looking at the Employment sub-indices for both sectors.

Employment index rose to 52.9 in Manufacturing from 51.2 in March. The move is against 49.5 12mo MA and 50.0 average for Q1 2012, suggesting some expansion in Manufacturing employment. The change comes coincident with a decline in the rate of growth in overall sector PMI to 50.1 from 51.5 in March. 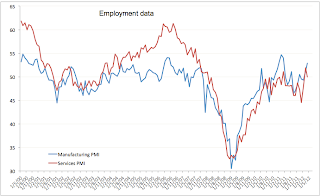 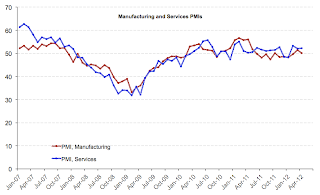 Short-term changes in the series, however, are pretty volatile. Chart below shows the counter-moves in the two sectors: 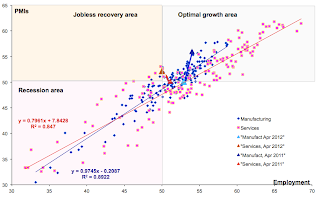 and the chart below plots relationship between Employment and Exports: 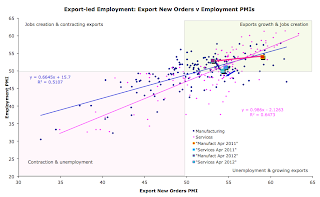 If sustained over the next 2-3 months, the trend might shift firmly to the upside.
Posted by TrueEconomics at 7:59 PM