In the previous post I looked at the headline Live Register stats for April. Here, let's take a look at the sub-trends.

Numbers of those in casual and part-time employment declined 274 to 88,442 in April 2012. Year on year the number is up 2,848 (+3.33%), compared to y/y change to March 2012 of +2,561 (+2.97%) - marking a slight deterioration of the trend. Overall, as chart below shows, things are running with a slightly upward trend. Again, you can opt to interpret part-time and casual employment as a good thing, or as a bad thing - glass half-full or half-empty, but generally, in my view, absent robust new jobs creation, this speaks more of a hidden unemployment, rather than of nascent entrepreneurship or a pick-up in some hiring activity. 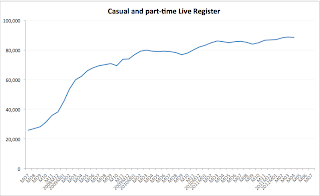 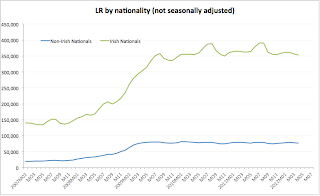 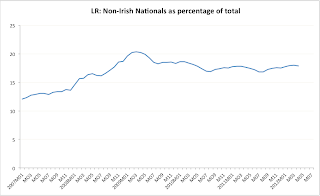 Stay tuned for occupational analysis of the LR in a subsequent post.
Posted by TrueEconomics at 12:26 AM