In this post, I am dealing with occupational distribution of Live Register.

"Craft and related (24.1%) remained the largest occupational group on the Live Register in April, despite the fact that the number in the group fell over the year by 8,580 (-7.6%) to 103,626. The second largest annual percentage decrease was in the Clerical and secretarial group (-5.4%). Slight increases were seen in the Sales group (+1.8%) and the Personal and protective service group (+0.6%) over the year".

Here are some additional details: 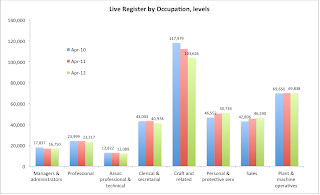 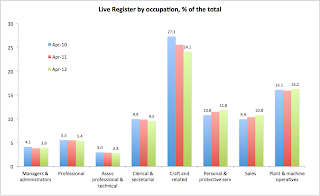 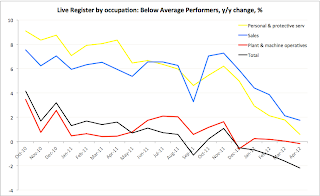 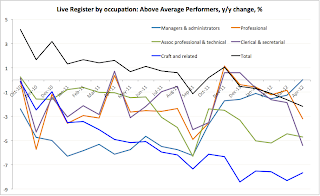 So several interesting things jump out of the data.

As expected, Associated Professional & Technical occupational category performed better than overall Live Register, posting stronger declines. This is consistent with the idea that exporting firms are maintaining their employment levels of mid- to lower-end staffing with some specialist knowledge. Alas, this outperformance is hardly spectacular.

Managers and administrators did relatively well until March 2012, since when their Live Register reductions have been underperforming overall Live Register - a worrying movement, but too short-lived to establish a trend. Clerical and Secretarial is posting some significant improvement relative to overall trend, but this comes on foot of average performance since November 2011 through February 2012.

Craft and related (the category including construction workers) is performing surprisingly well, suggesting that much of 'improvements' in the Live Register overall have been driven by people dropping out of LR coverage, not by jobs creation (recall, construction activity continues to tank).

An interesting feature of underperforming sub-categories is that they include manufacturing-linked Plant and Machine Operatives category (a sign that overall exports-led growth is jobless) and Sales category (showing the level of jobs destruction in domestic services, such as retail).

Changes in 2010-2012 April figures in absolute levels, shown in the first chart above show that Professional and Associate Professional & Technical categories have managed to reduce their overall Live Register counts by a combined 1,415 in two years! This is hardly consistent, overall, with a boom in profits expatriation by the MNCs and exports that we have experienced. Welcome as these numbers might appear, I wonder, how many of these LR reductions were due to emigration of skilled workers?

To summarise, I suspect that the core (practically the only) drivers of LR reductions have been drop-outs from the LR due to benefits expiration (especially for the categories with largest recorded declines), plus transition into state sponsored training schemes, plus emigration. I see basically no evidence consistent with the story that exports-led (or rather MNCs transfer pricing-led) growth has been strongly net additive when it comes to jobs in any of the occupational categories. In fact, this economy might be becoming top- and administration-heavier, rather than more skills-intensive. 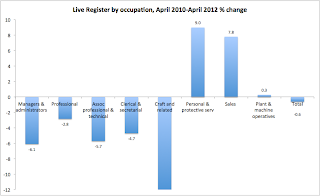 Posted by TrueEconomics at 1:34 PM