In its April 2008 review of Ireland's economy, seen by the Government some 5 months prior to its publication, OECD has identified two salient medium term problems linked to the twin crises we are currently experiencing:

Reforming the taxation of housing. "...the unusually favourable tax treatment increases the role of housing in the economy and adds to volatility in the housing market. There should be a gradual move towards a more neutral system of housing taxation," said OECD. Thus, even assuming its ignorance prior to the OECD report, the Government had at least 15 months since to design a functioning system of either land-value or property taxation, there by reducing the impact of the house prices slowdown.

Public spending needs to slow. "Fiscal performance has been strong in recent years but revenue growth has moderated as the economy, particularly the housing market, has weakened. Public expenditure is set to slow but it is important to avoid locking-in expensive commitments, particularly on public sector pay. As spending rises more slowly, improving public services will have to rely more on undertaking further reforms to public sector management and getting better value for money." Once again, nothing has been done in over 15 months to address these recommendations.

Chart below - taken from the OECD report, illustrates the extent of the problem.

However, a closer examination of the components of the public expenditure in Ireland show even more dramatic failure by the Irish Governments to stop the gravy train of wasteful expenditure.

Consider the following chart plotting actual net current expenditure against capital expenditure, incorporating my own forecast for fiscal consolidation in 2009-2010 and DofF January 2009 forecasts for the same period. 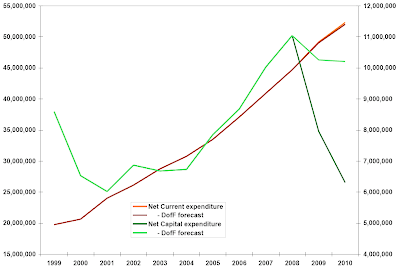 Two features can be glimpsed from the chart:

But there are more sinister trends in the expenditure figures. The DofF does not provide a historical data set for budgetary dynamics over time. Instead, possibly to keep the taxpayers in the dark about the real nature of our spending, DofF produces a multitude of largely useless, technologically backward annual reports. A troll through these reveals the following.

Chart below shows the net current and capital expenditures as a percentage of GDP. 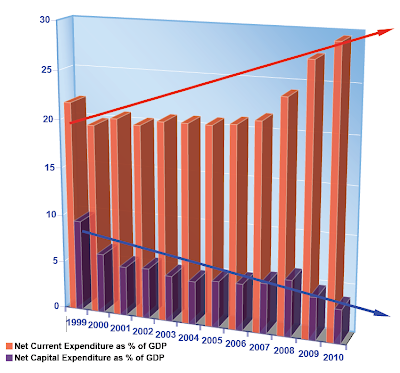 According to this chart, the economically unproductive spending which is largely absorbed into public sector wages and social welfare subsidies (our current expenditure):
This blows apart Governments' arguments that since the beginning of this century Ireland Inc was aggressively investing in the productive capacity of its economy. Instead, it shows that we were 'investing' in wages, perks and working conditions of our public sector 'servants' and in welfare subsidies at the time of unprecedented growth in prosperity and low unemployment. First Bertie & Cowen and now Cowen & Lenihan have engaged in a classic tax-and-spend banquet where the already-stuffed were getting fatter and fatter on taxpayers cash.

Should you wonder how high were the rates of growth in current and capital expenditure over the last decade, chart below shows that in 2000-2009, even by DofF own (excessively optimistic) projections for this year, cumulative capital investment's importance in overall economy will decline by 39%. In contrast, cumulative current expenditure growth will reach +27%. 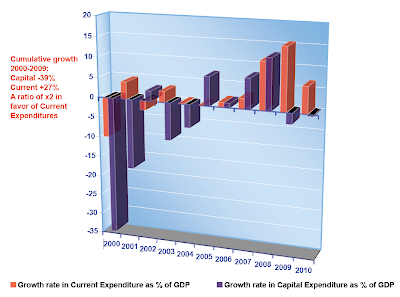 In short, the above figures show that:
Mr Cowen and the rest of the Government should stop talking about Ireland's plans to invest in infrastructure and knowledge economy. They should come clean on the fact that their leadership has left the country with a current spending bill well beyond our means.
Posted by TrueEconomics at 7:36 AM

You don't even need to crunch the numbers to see that the government is underinvesting in capital and overspending on the current side.

Just look at all the schools with kids in pre-fabs, according to Prime Time last night the cost in terms of financing a new build is approx a factor of three lower than the rental costs for the same accommodation in prefabs.

The speed and usefullness of the roll out of our roads system is a joke and appears more than anything to be designed to favour speculators who happened to own land near intersections.

Same goes for tackling traffic congestion in Dublin by not investing in public transport.

Meanwhile there has been an enormous pay increase weighted towards the higher ends of the civil and public service with no commensurate benefits in productivity or outcomes of public activity and decision making.