McKinsey has done some homework and published impressive findings on the issue of corporate leadership in the current downturn. You can get the article here, if you have access to the Quarterly, but below are some main findings.

Now, we all by now can be counted as the slaves of 'innovation' fad - the trend in modern management and policy to label every strategy change an 'innovation', but what McKinsey data shows, strategy is still the king when it comes to responding to changing environments.

"Innovative strategies are the key when corporate directors evaluate their boards’ responses. Among the group who say their boards have been effective in responding to the crisis, 60 percent credit the development of new strategies to manage risk and take advantage of new opportunities (chart below). That same area of management is most frequently cited as lacking among respondents at companies with ineffective boards. (This finding is consistent with the results of another recent survey, in which executives said support for innovation should be the overall focus of governments’ actions in response to the crisis.) Other areas that have been addressed by many effective boards are financing and operational needs; at unsuccessful companies, respondents say their boards have been particularly ineffective at tackling talent management and restructuring." 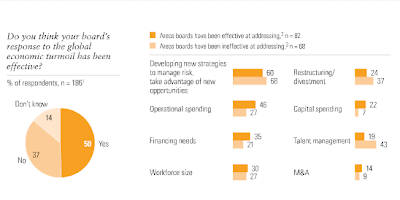 So let me ask you this question. Since November 2008 I spent inordinate amount of time and effort trying to convince some of our top organizations and companies - amongst hardest hit by the current uncertainty in the markets - to set up some formal research function to evaluate various strategic responses to the crisis that they can adopt. The structures I have been proposing are pretty much in line with those summarized by the McKinsey below: 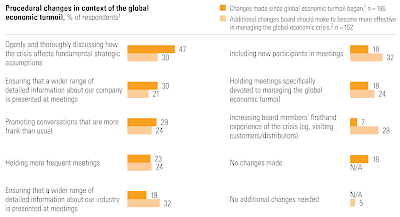 Not a single Irish corporate took up my challenge. Majority of our corporate leaders are sitting on their hands, in words of Leonard Cohen 'Waiting for the miracle to come". But don't take my word for it - here is hard data on the issue.

Here is the truth - 'miracle' ain't coming, folks. Wake up and smell the roses - if you your board/CEO assessments of counterparty contributions is anywhere close to what McKinsey reports, you are screwed. Your corporate structure is rotten from the head down and you need to do an independent appraisal of it from the head down. Waiting around for 'miracles' is not going to do it.
Posted by TrueEconomics at 12:14 PM