The volume of shares traded on the New York Stock Exchange has topped the 50-day moving average on six of the seven days that the stock market has been up since March 6 (the day on which the S&P 500 touched its most recent low). The broad benchmark index has gained 15% since that low, sparking hopes of a recovery. The significant issue here is in the volume figure, not in the actual rise in the index, as stronger volumes on a rising trend tend to support more risk-taking and signal investors' support for the trend.

Interestingly, the same, but less pronounced, process has been starting on Friday in the Irish markets. 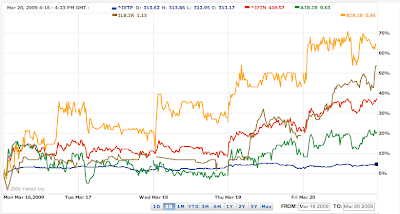 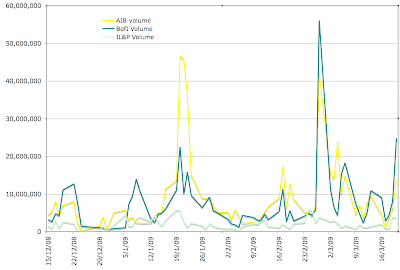 This is less pronounced when we normalize daily volumes by historical average, as done in the chart below. 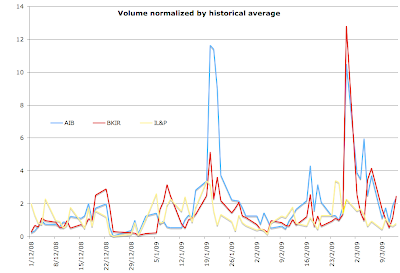 Less extraordinary change is underway above, because we are using moving averages as normalizing variable, implying that we actually capture the inherently rising volatility in volumes traded here. So the above chart actually suggests that while Friday up-tick in share prices (and pretty much the last three day's rally) was reasonably well underpinned, it will take some time to see if market establishes a solid floor under the share prices.

Monthly results so far remain weak. Only BofI was able, so far, to recover all monthly losses and post some gains. AIB is just hitting the point of return to late February valuations. Given that at the point of sale - at the end of February, beginning of March - the volumes traded were 5-7 times those of the current week's peak, it is hard to see the present recovery as being driven by pure psychology and the spillover from the broader global markets (US' momentary lapse of optimism). 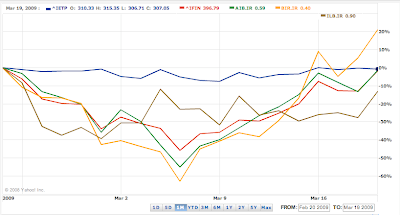 Two more charts: recall that in mid February I argued that downgrades in all three financials will come to an end by February's expiration and all three will settle into a nice slow bear rally, running at virtually parallel rates of growth. Chart below shows that this is happening, indeed. 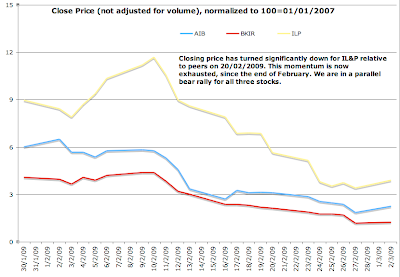 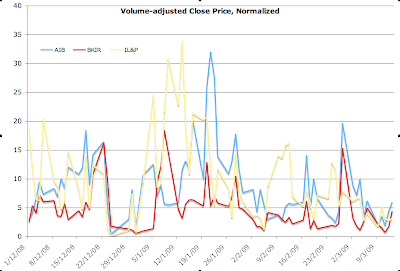 Once we normalize prices and account for volumes traded, there is nothing surprising in the share prices movements since the beginning of March. And this is exactly where, as I argued before, the markets should be: awaiting news catalysts...
Posted by TrueEconomics at 11:28 PM