How bad will it get? IMF study

Here is a new insight into recessions dynamics. This time from the IMF (see link here).

What Happens During Recessions, Crunches and Busts? by Stijn Claessens, M. Ayhan Kose, and Marco E. Terrones (IMF WP/08/274) looks at "the linkages between key macroeconomic and financial variables around business and financial cycles for 21 OECD countries over the period 1960–2007."

The authors "find evidence that recessions associated with credit crunches and house price busts tend to be deeper and longer than other recessions... Episodes of credit crunches, house price and equity price busts last much longer than recessions do [4 quarters on average]. For example, a credit crunch episode typically lasts two-and-a-half years and is associated with nearly a 20% decline in credit. A housing bust tends to persist even longer—four-and-a-half years with a 30% fall in real house prices. And an equity price bust lasts some 10 quarters and when it is over, the real value of equities drops by half."

Of course we are experiencing far deeper contractions in house prices and equity valuations than an average bust.

"Most importantly, recessions associated with credit crunches and house price busts are deeper and last longer than other recessions do. In particular, although recessions accompanied with severe credit crunches or house price busts last only three months longer, they typically result in output losses two to three times greater than recessions without such financial stresses. There is also evidence that the extent of declines in house prices appears to influence the depth of recessions, even after accounting for the changes in other financial variables, including credit and equity prices, and various other controls."

Where is Ireland in all of this? We have:
16-23% contraction in real output in Sweden and Finland in the recent past is a guide, according to the IMF study, for the type of recession we are in. Overall, there were only 4 episodes of coincident credit, equity and house prices busts.

Using econometric estimates (Tables 13.A and 13.B in the paper), we can parametrize the IMF model to estimate the expected contraction in Irish economy during the current crisis. Table below lists the underlying assumptions (in % changes) and results. 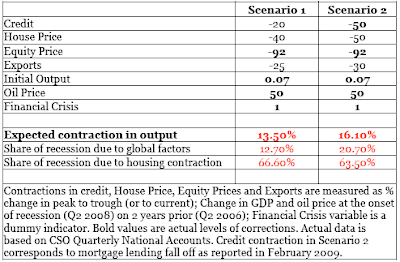 Thus, under benign Scenario 1 assumptions, overall income contraction in Ireland over the recessionary cycle is expected to reach 13.5%, while under more severe Scenario 2 the contraction can result in a fall in real income of 16.1%. My personal view - we are going to see the latter rather than the former.

IMF study allows us to estimate the share of overall contraction that is attributable to the housing shock absent credit bust - in other words, due to purely domestic factors. This ranges from 66.6% in Scenario 1 to 63.5% in Scenario 2 - in both cases, a lion's share of the recession-induced economic pain is due to 'domestic' causes. At the same time, the share of recessionary decline in income that is attributable to 'external' or global factors (all shocks net of housing price bust) is ranging between 12.7% and 20.7%.

So much for the argument that we are in trouble because the rest of the world.
Posted by TrueEconomics at 11:41 PM