According to the Irish Times, Brian Lenihan is now admitting that the revenue receipts for March are going to show even further deterioration in the fiscal position. This time around, Lenihan is claiming we will fall to €34bn in receipts, as opposed to the DofF forecast issued in January, assuming receipts of €37bn. Oh, Brian, thou are an incorrigible optimist. Anyone who has read this blog knows that I predicted this much in February (see here). That was then and despite the fact that our Minister Lenihan, with his new advisers from NUI (or 'yes-men' as I would put it), are catching up with my numbers, I have to move the targets once again.

(can someone figure it out what's the value of all these paid economists working for him if they are a month-and-a-half behind this free blog in forecasting?)

So here is my latest forecast - it will be subject to a revision once the actual Exchequer returns come out for March. 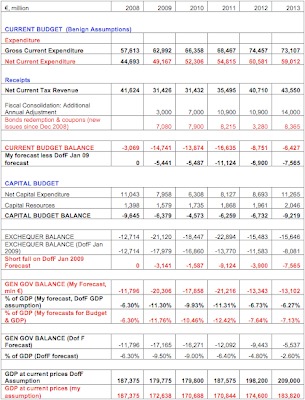 Notice that I have dropped expected gross tax revenue to €31.4bn (inclusive of non-tax items), consistent with tax revenue of €31bn. I have also computed the General Government Deficit as a function of my forecast for 6.5-7% drop in GDP this year. Thus, 2009 Gen Gov Deficit is now expected to reach 11.8% of GDP and by the end of 2013 this will drop to 7.13%, not 2.5% that DofF predicted in January 2009 estimates. The reason for this later-years discrepancy is to a large extent driven by the short-term debt being issued by the NTMA to finance current spending.

So, Brian, here is a challenge - how soon will you and your advisers get down to my forecast figures? Or, should you want to save some dosh for the taxpayers - you can fire a couple of them and hire myself - I'll do their jobs (obviously) better and for, say, 1/4 of their price?

Now another update - new Eurocoin forecast for Euro-area economic activity is out, so time to update my own forecasts. Here is the chart. Lines in red denote my forecast forward. 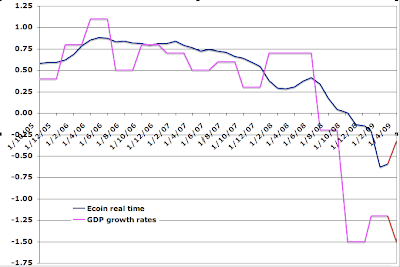