I am putting this link (here) to today's WSJ interview with Gary S Becker in red, bold and at the top of this post (and on the front of my blog page) not only because he is the greatest economist alive today (which he is), and not only because he taught me microeconomics (how poor of a student I was is attested to by my self-deception of believing in being right on more occasions than being wrong), but because this interview is a must read for anyone concerned about the state of our world today.

A new invitation is out - from Brian Cowen to the social partners - to enter talks on a new National Agreement. Yes, folks, you've heard it right. The Government that can't do anything worth talking about on the crisis is back to talking about doing something on the crisis. Dust out that Excellence in Services medal for Brian. Instead of facing down the unions in their militant stance on the economy, Brian Cowen has done another one of his 'courageous' and 'decisive' flip-flops that our official media got so accustomed to calling upon him to perform. Expect: more blame for private sector, higher taxes, more pay for public servants, rampant price inflation in state-controlled sectors and... well, just expect more of what we had in Autumn 2008.

This time around, the markets will be searching for what to hit next. Given that Brian's first round of 'dealing with the crisis' has spectacularly collapsed into issuing blanket guarantees to the banks, nationalising one bank, handing taxpayers cash to two other banks, passing no meaningful measures on stimulating economy, hammering consumers and taxpayers, slaughtering retail sector and seeing public debt soar, they will be hard pressed to find a new target still standing.

Revolting, is how I can describe this latest move at best.

Just how senile our policy making has become as of late? Think Nationwide scandal. Mr Fingleton is walking away with millions and the Government and the politicos are issuing salvos of outrage. But they can do nothing - he owns the money. How? The truth is that Fingelton gets to keep his millions only because in September 2008, the Exchequer has underwritten the Nationwide. Would they have said then: "Sorry, buddy, but there is no way Nationwide is a systemic bank and so no guarantee", the bank would have gone into a receivership and Mr Fingleton would have received what he deserves after all these years of running his own 'lille piggy bank' - zilch, nada, zero.

So don't blame the bankers - blame the politicos. And let's ask Brian^2+Mary to see that assessment of the Irish banking system that managed to recognize the likes of the Nationwide as a significant enough institution to have caused a systemic risk to the entire financial system were it allowed to fail.


US:
Forbes is now on the inflation case (here): "On a year-over-year basis, the CPI will turn negative this month and stay negative for many more months. As a result, many believe inflation is a distant memory and those who fear deflation will have data to hang their hats on for much of 2009. But, these deflation-istas will be looking in the rear-view mirror. On a month-to-month basis, inflation is already starting to claw its way back. In the first two months of 2009, consumer prices are up at a 4.1% annual rate, while producer prices are up at a 5.8% rate."

Worth a read. I have warned about this threat of inflation a week ago (here), so we are ahead of the curve...


More on the Geithner 'Trillion-dollar Rescue' Plan (GP): let's do some math
Recall that 95-97% is going to be financed by the Feds, and the Government share will be roughly 20% of the entire value. So under GP, taxpayers are getting $125bn in assets in exchange for $950bn in payment... Ahem, that is a rotten deal, indeed.

But what does this deal buy in the end? Combine that with the fact that
Thus, total balance sheet exposure to property in the case of the US banks is somewhere in the region of 68%. Of these, at least 40% is toxic, so that we can assume that 25% of the entire banks' balancesheets is of reasonably nasty quality. Suppose banks sell (via GP) these assets at $0.80 on the dollar. The required post-sale writedown on the loans will be 25%(1-0.8)=5% of the entire asset base. Per latest statement (December 31, 2008) by the Bank of America, this venerable (if vulnerable) institution has tangible equity to total assets ratio of 5.0% and Tier 1 ratio of 9.2%. This is excluding the toxic stuff it inherited from Merrill Lynch. Thus, in effect, participating in GP will wipe out all of the bank's tangible equity and more than 1/2 of its Tier 1 capital, pushing it well below the 6% Tier 1 ratio required of reasonably sound banks.

So this implies that very few banks will be willing to sell at $0.80 on the dollar. A more acceptable price for banks would be $0.95 to a dollar, but at that price, the US taxpayers will fall some $833mln short on the deal.

Could someone please tell me why we are talking about GP as some sort of a market-turning deal? Unless, that is, we are buying into the plan because it is the first, and so far the only plan that a new Democratic Party White House has contrived?


US Personal Income data: "US personal income growth slowed to 3.9 percent in 2008 from 6.0 percent in 2007 with all states except Alaska sharing in the slowdown," according to the data released by the US Bureau of Economic Analysis. The U.S. growth was the slowest since 2003. Inflation, as measured by the national price index for personal consumption expenditures, rose to 3.3 percent in 2008 up from 2.6 percent in 2007. Here is a nice map of heaviest (and lightest) hit states:

Can you see the pattern? Well, here is another map: 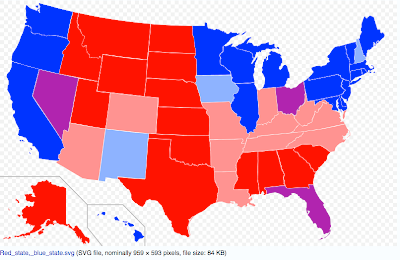 House Prices (US): Home prices rose 1.7% in January relative to December 2008, says Federal Housing Finance Agency - the first monthly increase in 12 months. This leaves home prices down 6.3% in the past 12 months and -9.6% off from their peak in April 2006. In December, the year-on-year decline was 8.8%. One note of caution - this is the preliminary estimate subject to at least two future revisions. For example, December 2008 preliminary estimate was showing 0.1% fall in prices, but this was revised today to -0.2% decline. Overall, in January, home prices rose in 8 out of 9 regions (only Pacific states registered a decline -0.9%), with strongest gains in East North Central (+3.9%) and South Atlantic (+3.6%) regions.
Posted by TrueEconomics at 2:29 PM