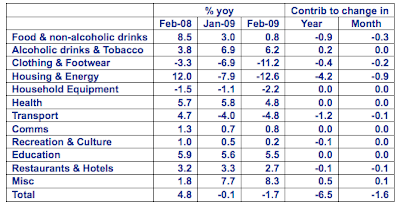 The above table, courtesy of Ulster Bank's economics team, is revealing.

CPI is now anchored firmly in the deflation zone at -1.7% for February - a record rate of deflation since Q1 1960 (when CPI fell 2%). Prices actually fell 0.4% last month, but because in February 2008 prices grew by 1.2%, the overall difference amounted to -1.7%. So don't be surprised if you are not feeling that easing on your household budget (other than house payments), yet.

The HICP harmonised measure (ex mortgage rates) fell to +0.1%, the lowest in history (since 1997). This implies that CPI fall off was dominated by the ECB-driven declines in the cost of mortgage finance. The average mortgage cost declined 8% in February and is now down 26% on a year ago. This is certainly helping many households to stay afloat, given rapid deterioration in after-tax disposable personal incomes and rising unemployment.

Now, do the math - if the ECB rate-cuts cycle is to run out of steam by H2 2009, as expected at ca 0.75-1% level, total savings on average mortgage will amount to a total of 33% off their peak. Assuming an average mortgage burden of 30% of the household budget at the peak, this will shift overall mortgage burden to ca 22% of the budget. Assuming income tax, VAT and other housholds-related measures stay on course laid out in Budget 2009, mini-Budget will result in a fall in the household disposable income of 3-5%. Add in expected fall in earned income (due to slowdown and rising unemployment) and we have a recession-induced 13-19% decline in the disposable income. Thus, the average mortgage burden for the household will rise back to 26% at the bottom of the ECB rates-cut cycle, virtually canceling any positive effects of the ECB rates cuts on households' balance sheets.

But as always, it was in the Government controlled/regulated sectors where price changes were out of sync with the rest of economy. Health insurance costs were up 21%, house insurance was up 17%. Education was up 5.5% in February after a 5.6% increase in January, health was up 4.8% in February after an increase of 5.8% in January. Government-sponsored rip-off of consumers is still alive and kicking. (Note: of course, house insurance is not directly priced by the state, although it is a part of the regulated sector. Possible causes for the rise in house insurance in recent months might include inclement weather payouts and, more importantly, insurers using all means possible to strengthen their capital reserves positions. The latter is a function of regulation and markets assessment of inherent risks. Both, in turn, are functions of the public sector actions/inactions, although indirectly).

While private sector prices were down 0.1% in the last 12 months, Government-controlled prices were up and the rate of increases is accelerating. In 12 months to January 2009: Gas prices were up 20%. Health insurance +19%, Electricity +17%, Bus and Rail transport +13% & +9% respectively, Hospital services +7-9% (out-patient v in-patient). Total Government-controlled inflation +14% for regulated services in year to February 2009.

Posted by TrueEconomics at 2:24 PM