Retail Sales volume decreases by 20.4% in January 2009 relative to a year ago, per CSO report out today. In monthly terms, index fell 9.4%. Mad numbers. And the things are going only to get worse, given the inept, virtually economically illiterate policies this Government has been putting out to date. Motor trades collapsed by 42.2% in January 2009 - in part due to tax hikes in October, in part due to VRT and road tax changes by the Greens, and to a large extent due to income uncertainty being hammered by the additional uncertainty as to the tax hikes the Government is planning to inflict on this already devastated economy. Ex-motor trade the volume of retail sales decreased by 8.1% in January 2009 compared to January 2008 and the monthly change was -0.1%. The value of retail sales decreased by 19.9% in January 2009 compared to January 2008 and decreased by 10.0% in the month. These are the largest annual decreases on record (1974 for volume record, 1962 for value).

Food, beverages & tobacco were down -11.6% in volume and -8.2% in value annually. These are inelastic demand articles, showing the full extent of consumers taking their business out of the Brian^2+Mary-devastated Ireland to the North and the Continent. Virtually every category of durable goods - goods that can be purchased up North and brought back to Ireland - is showing decreases in the 20-30% range. This is the real cost of Government's incompetence and the real indication that for all the wishful thinking our pro-tax-and-spend economists (in academe and SIPTU/ICTU) might deploy arguing that higher VAT will produce higher revenue, the reality of raising VAT (or income tax, for that matter) in terms of Exchequer revenue is going to be brutally contrarian.

Check other commentators' view - here Gerard O'Neill's blog on the topic, comparing the situation to "economic bungee jumping without the bungee". Well put! And here is another good comment worth reading.

Myles' post links to a report produced by the Office of the Revenue Commissioners and the CSO in February 2009, desperately trying to explain away the price differentials between the Republic and NI by all possible means other than those that put blame at the feet of the Government. Myles cuts past the bull&castle stuff in the report and, I think, correctly places most of the blame on the Government policies of squeezing consumers out of their earnings. But the linked report is fun. Fun, because it had to rely on, wait, other Government reports (e.g. June 2008 report by that illustrious data collection and analysis organization - the National Consumer Agency - that wouldn't know a data point if it jumped out of the hedge and bit it, and December 2008 Forfas report that was so poorly prepared and sampled that it was rubbished by several subsequent responses to it, including some from the objective/disinterested organizations and individuals). So I do encourage you to read through the report that Myles links in his blog - it is a good example of self-referential work being done by Government agencies.

Oh, and here is a pearl: Industrial wars are heating up... This is from IFUT - "a professional association and union representing over 1400 staff in third-level institutions" (hat tip to an Anonymous)

"Subject: BALLOT FOR INDUSTRIAL ACTION
I wish to advise you that the Ballot for Industrial Action was counted today and the following is the result:

Therefore, the majority in favour being above the minimum set out in Rule 16 (b) (ii) we are authorised to participate in the ICTU National One-Day Stoppage scheduled for 30 March 2009..." blah-blah-blah, signed by the General Secretary of IFUT.

Note that per IFUT own website, there are over 1,400 members in this organization. Assuming the vote count reported is correct and that IFUT's rounding rules are the same as those holding for the rest of humanity, the ballot was passed with just 35-36% of the total number of eligible voters on a turnout of just above 50%. Hmmm... without a doubt - a mass-movement, supported by popular outrage against the Government.

US
According to the latest data from the US Treasury Department (here) the US public debt just passed $11 trillion. Chart below (courtesy Seeking Alpha - here) illustrates. 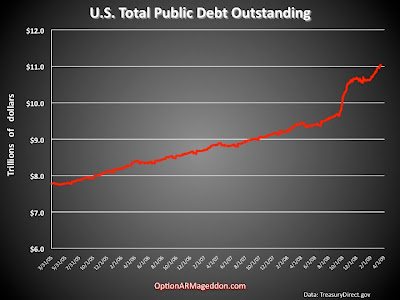 If you think Obamanomics will be the New Bill Clinton era, think again - more than $2trillion worth of new US bonds to be issued this year alone is going to see this chart shooting for $13trillion mark by the end of 2009. Thereafter? The sky is the limit.

Although dollar is currently trading on the upside (0.41%) to the euro, given the US public debt trajectory and factoring in the aggressive quantitative easing by the Fed, it is hard to see how the green buck can stay below $1.45-1.47/1euro range...

To update you on General Electric figures concerning GE Capital's (alleged) rude health, here is a link to investor presentation.

An interesting (and pioneering) case is developing in the US: the battle-ravaged AIG filed a lawsuit against Countrywide Financial Corp - one of the largest issuers of MBS. The lawsuit alleges the mortgage lender misrepresented the underwriting standard of loans that the AIG unit insured. The claim is that mortgages packages insured by AIG either violated Countrywide’s own guidelines or contained defects. Surely this paves the road to European insurers to sue mortgage providers and MBS-issuers. The big question for Irish financials is now - how soon can this wave of liabilities reach our own shores?

A Georgia-based FirstCity Bank was closed by the US regulators today, marking the 18th bank failure of 2009. Regulators also shut down some US credit unions with assets of up to $57bn.
Posted by TrueEconomics at 11:34 AM

Constantin - apart from the 20% drop in retail sales in 2008, it is also noteworthy that tax revenue in January 2009 were 19% lower than in January 2008. The decline in stamp duty from €180 million to €50 million and the decline in corporation taxes from €196 million to €121 million is particularly interesting. I also not that expenditure at the Department of Agriculture & Food increased from €88 million in January 2008 to €129 million in January 2009. This is the outfit that 'overlooked' its commitment to pay €400 million in respect of slurry clearance. It also committed €180 million to pig producers at the conclusion of the dioxin scare last November. The pig processing industry earns revenues of €400 million per year. It was shut down for a week. How and why did it gouge €180 million from the Government to reopen? /M