A sight of carnage: US

DJIA has fallen past the psychologically important 7,000 marker to trade at 6,763.29 at the time of writing this - well below its previous 52-week intraday low of 6,952.06. As it stands, the Dow is now at the levels last seen in April 1997. The chart below illustrates. 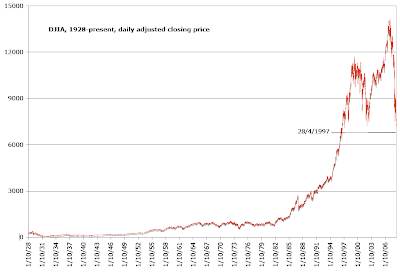 The drivers for the latest slide are clearly the renewed pressure on financials and the fact that the Obama Honeymoon is over - the markets are now turning sceptical about the new administration's ability to push the economy out of a depression spiral. Concerns are mounting as to the inflationary effects of the current policies amidst a general conviction that there will be no upside to economic growth. The traditional partisan Democrat policies are now being seen as setting the stage for a return to the dark ages of Jimmy Carter in the near future.

The graph below (courtesy of Calculated Risk) illustrates:

Notice that although the downgrades are much steeper today than in the 1970s, the trajectory of the most current downgrades (slope) is virtually identical to the 1973-1974 crisis. A fellow in the US investment community (thanks for the question HM) just asked me how this can happen, given oil is scrapping the bottom of the barrel in price terms while inflation is yet to rear its ugly face - the opposite of the stagflationary 1970s scenario. Here is an explanation.

The fiscal stimulus package unveiled by Obama is designed to increase inflation-inducing public spending by unprecedented amounts. At the same time, personal income is rising again, while propensity to consume is improving. These are the driving forces of the renewed inflation that can appear just as suddenly as deflation set in late last year.

On the other hand, today's energy in he economy is no longer oil. Instead it is credit and cash. Both are in short supply and near peak level of prices. The oil price is largely irrelevant lagging indicator of global demand, not of the productive capacity of economy. The flow of credit is the latter and not the former.

So the Obama-styled Carterism is going to manifest itself in higher inflation down the road and falling or stagnant real output, as price of the modern 'energy' - credit and money - is going to remain high. 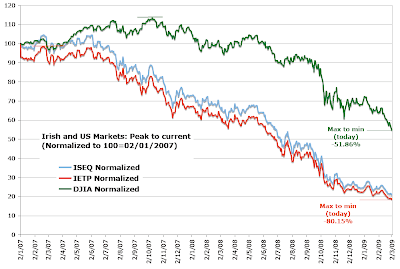 Then again, the US has had it easy so far, compared to Ireland... Chart above illustrates.

May be Mr Cowen can bring some Irish bonds as a gift to the White House for the Paddy's Day? Cheaper than shamrocks and equally symbolically useless.

P.S. There is an excellent summary of the US Economic Conditions for February 2009 at Calculated Risk site (here).

Posted by TrueEconomics at 9:20 PM

Interesting graph ISEQ vs DJIA. I wanted to see it over a longer timescale and that is even more telling. See here http://finance.yahoo.com/q/ta?s=^ISEQ&t=5y&l=off&z=m&q=l&p=&a=&c=^DJI