So we are in a rally, at least in the US. 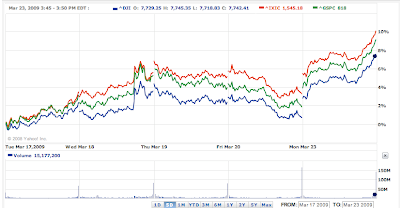 Financials are again in the lead, as chart below showing. 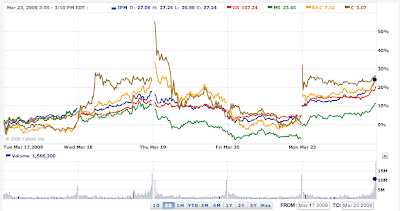 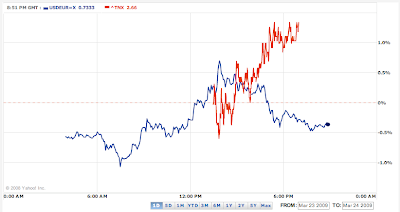 What can one expect from a relatively rational(ized) market when it is faced with a renewed $1trillion push of cash into draining the toxic pool of mortgages-linked securities.

A friend - high up in international finance - asked me again if this is a sign of a thaw. I again said, it is not - just a rational reaction to a massive push on the dollar. Real values are not changing much, but what is happening is the wholesale repricing for the dollar to reach 1.45-1.50 to euro once again. Here is an illustration of why I am still not buying the permanent rebound hypothesis (courtesy of dshort.com): 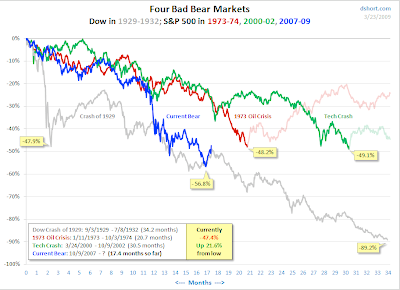 What about the Geithner Plan (GP)? Well, whatever one can say about it, words 'original' or 'innovative' are not something that comes to mind. It falls short of a nationalization and nationalization is what will probably be needed. Not a wholesale take over, but certainly not a 20% equity take by the Feds in exchange for a 97% capitalization, as the GP envisions.

Financial services lap-dog economists loves the thing, though. For example, one senior economist from Wells Fargo claimed that the plan "will go a long way toward getting banks... to lend more aggressively and break the deleveraging feedback loop" now in place. This is the lunatic asylum stuff, for it assumes, without even stating so much, that there are hordes of willing borrowers gathering just outside the banks doors. And it further assumes that deleveraging is bad. Given that the whole mess was brought upon us by the excessive leveraging in the first place, either I am losing my mind, or the entire world is now rushing head on to create a new bubble in place of the old one.

The main problem with GP is that it comes on top of the TARP and a host of other asset-purchasing arrangements. Now, all were offering lenders some set of prices for distressed assets. These prices were set arbitrarily high to incentivize the banks to unload their troubled loans. But clearly, TARP was not sufficient, so the GP will have to set prices even higher - at some premium to TARP to further induce the loan holders to part with their distressed paper. And here is a catch. Since inception of TARP, the quality of the loans still on the books in banks have fallen - steadily and rather rapidly. Will this imply that investors are now being incentivized to bid for loans at a price above their true market value? Of course it will and this is precisely why the Feds are offering the bidders a 97% financing package in return for 80% equity in the loans purchased, with Federal financing done on the back of non-recourse loans (loans that are collateralized against the value of the securities purchased alone).

The GP will in effect act as a subsidy to the banks. Hence that nice climb in banks shares in recent days. Geithner's idea is to have a free lunch served to the banks today, for which the taxpayers will pay tomorrow and the restaurant staff (the investors) will get paid a day later. It is, as the Calculated Risk blog puts it, "a European style put option - it can only be exercised at expiration. The taxpayers will pay the price of the option in the future, the investors receive any future benefit, and the banks receive the current value of the option in cash. Geithner apparently believes the future value will be zero, and that is a possibility. If so, this is a great plan - if not, the taxpayers will pay that future value (and it could be significant)."

Note to the Derivatives students: this could have made a good question for exam...

On a somewhat more positive note: sales of existent homes were up 5.1% in February. Although this figure - the largest percentage gain since July 2003 - (a) comes after a 4.6% contraction in yearly sales and (b) was the result of deep price discounts (especially due to rising tide of foreclosures and short sales that accounted for 45% of all transactions), sales rose in all regions. Full 65% of the potential buyers expect the market to bottom out within the next 12 months.

Inventories of unsold homes - once again a sign of deepening foreclosure pools - on the market rose by 5.2% to 3.80 million, equating to a 9.7-month supply at the February sales pace. Although seasonally inventories usually rise ca 5% in February, this time around the increase came after a prolonged period of stalled construction activity. In other words, there is little reason for rising new inventories other than an acceleration in forced sales and foreclosures.

In fact, just as the subprime tsunami recedes by May-June 2009, the next wave of homeowners defaults is about to start hitting the US markets, as the following two charts (sourced here and here) illustrate:

Posted by TrueEconomics at 11:50 PM