Excellent piece on Irish Nationwide excesses here - I would certainly encourage everyone to read through it.


On the news front -

Ireland:
Per CSO (here): the number of overseas trips by Irish residents fell by 8.4% to 502,100 in January 2009 compared to the 548,400 a year ago. Brian^2+Mary's tax on travel and recession biting. And euro's steady rise has taken a bite out of travel to Ireland too: there were 424,200 overseas trips to Ireland in January 2009 - down ca3% on 2008. "Visits by residents of Great Britain accounted for virtually all of this decrease, falling by almost 16,000 (7%) to 208,300." Needless to say - this is costing this country. Visits by residents of Other Europe and North America recorded slight increases to 149,500 and 45,200 respectively. No breakdown on vitally important length of stay and locations visited by foreign tourists here was made available. The crucial point missing here is just how bad is it going to get for Irish hotels, located outside Dublin. In recent months, these palaces of rural kitsch built on the back of senile tax breaks to developers, courtesy (in part) of Brian Cowen in his tenure as Minister for Finance, have been popping out of business like flies in late autumn. 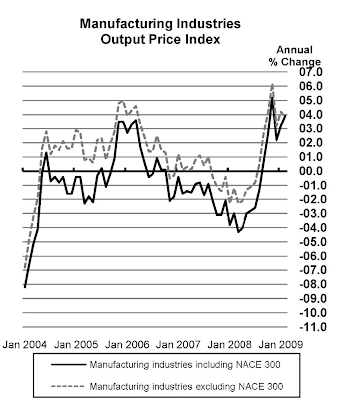 Monthly factory gate prices increased by 0.9% in February 2009, as compared with an 0.2% rise recorded a year ago, the annual increase of 3.9% in February 2009, compared with and annual rate of growth of 3.2% in January 2009. Inflation cometh? Well, possibly. In the year the price index for export sales was up 4.3% while the price index for home sales was up 1.7%.

Wholesale price changes by sector of use shows that: Building and Construction All material prices decreased by 1.2% in the year since February 2008 (surprisingly, very small deflation in the face of all but collapsed construction), and there were increases in Cement (+8.0%), and Stone, sand and gravel (+4.8%). At least Sean Quinn can always go back to mining boulders. Year on year, the price of Capital Goods decreased by 0.1%, and the rate is accelerating to -0.4% last month. The price of Energy products increased by 5.2% in the year since February
2008, while Petroleum fuels decreased by 17.9%. So ESB and Board Gais are still ripping us off, while teh Government is fast asleep. In February 2009, there was a monthly increase in Energy products of 0.4%, while Petroleum fuels increased by 1.6%.

Clearly a good sign for Brian^2+Mary, who can now rest asured that Irish families are producing more future taxpayers for the Government to continue ripping off ordinary families. The bright future is at hand at last for public sector wages and pensions.

Unemployment - new claims have fallen by 12,000 to 646,000 in t he week ending March 14, while the numbers collecting unemployment benefits rose by 185,000 to a record seasonally adjusted 5.47 million by March 7th. The four-week average of new claims also rose by 3,750 to 654,750, the highest level in 26 years. Still, at least some things are starting to move in the right direction.

In the mean time, General Electric said it now expects GE Capital Finance unit to be profitable in Q1 and for the full year 2009. This follows a recent $9.5bn injection of capital by the parent. This, if holds through the year, is good news, as GEFC has been at the forefront of writing dodgy loans and mortgages to distressed consumers in 2005-2007.

Of course, Wednesday data was also showing some signs of the bottoming in the US recessionary dynamics. US consumer prices increased a seasonally adjusted 0.4% in February, primarily on the back of a 3.3% rise in energy costs (8.3% rise in gasoline prices). Food prices fell 0.1% in the first decline since mid 2007. Core CPI (ex Food and Energy) was up 0.2% - a nice range signaling possible end of deflation.

This is not to say that the current rallies are sustainable. So far, we are starting to see some early stage recovery indicators attempting to find the floor. It will take couple of months for them to start turning. But the markets will remain bearish until the second stage indicators start flashing upward turn-around. These are existent unemployment claims, construction indices, pick up in resale markets activity, PMIs etc. Until then, you'll have to be brave to wade out of the cash safety into individual equities.

And the latest news on the second stage indicators is poor. The index of leading economic indicators - designed to forecast economic activity 6-9 months ahead - fell 0.4% in February, following a gain of 0.1% in January 2009. Overall, 6 out of 10 indicators were up in February and 4 were down. According to Ian Shepherdson, chief economist with High Frequency Economics, "The trend remains clearly downwards, consistent with continued outright contraction in the economy."
Posted by TrueEconomics at 1:31 PM