Irish external debt stats for Q4 2008 are out and, guess what, things are looking worse than before. Here is the CSO table: 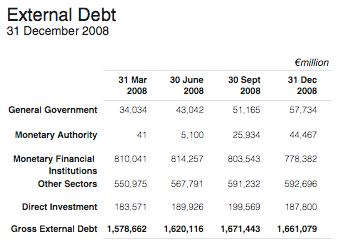 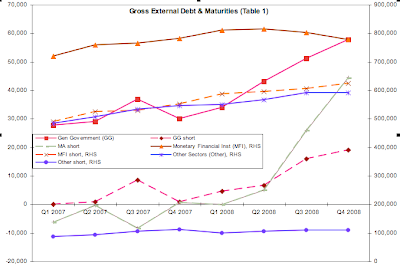 So, despite CSO's brave claims - the title of today's note is Ireland’s External Debt decreases to €1.66 trillion at end December - in reality, the debt mountain is still growing (in yearly comparisons) and the nasty short-term debt overloads are getting heavier.

Now, think, what will happen if the Government was successful in restarting banks lending?

Per one of the readers comments, here is the table with actual nominal increases in various debt headlines.

Posted by TrueEconomics at 11:21 AM

so in reality the upcoming budget is not going to make much of an impact in the long run? Is it safe to say that poilcy is still being decided by people who fundamentally don't understand what is happening or how to correct and get back on track?

And the worst aspect.. we are now heading into such a deep hole that the queue of saviours has all but disappeared. We have screwed up on a monumental scale.
JK

Just making sure you see this gem, Constantin! http://www.euractiv.com/en/enterprise-jobs/ireland-mulls-patriot-bond-kick-start-economy/article-180791

Can you confirm the debt burden is increasing in real terms above the posted amount given that deflation has set in?.

Also tax revenues are down massively resulting in a far higher burden (percentage wise) being laid on the taxpayer for repayment of public debt.
This obviously has a knock on effect on what remains for state services.

Can you comment on the above and also if my points are valid do they feature in how international investors or ratings agencies evaluate our ability to service the debt?

Guys, thanks for comments - here are my replies to all three so far:

JK: I agree, but as Dave's link (see his Comment) exemplifies, there are plenty would be 'rescuers' out there and there is an opportunistic streak in Irish business leadership that is willing to blatantly exploit these 'useful idiots' (to use Lenin's phrase).

Take for instance the idea of 'patriot' bonds. If some ex-pat or Irish-American wants to support this state - they can perfectly buy Irish bonds on the issue already or buy into Irish ETFs. The do so no more frequently than the average American/foreigner does.

So what does it tell you of Ms O'Toole's senile attempt at economic policy? Two things: (1) she has no clue what she is doing and she is doing it solely to gain publicity and access to the Government/politicos; and (2) Brian Cowen's endorsement of this 'policy' site is nothing more than cheap pandering to the masses.

How do I know the latter? Well, Trade Unions have already floated a similar idea and there was no buy-in from the Government.

Why? Because there was fear this bond issue will sap away some of the already undersupplied liquidity in the deposits.

So how is this bond going to be different? You can't offer it to 'Foreign Residents' only... And you can't offer it at anything less than the going yield on Irish bonds either... Which makes the whole idea a clear non-starter. But to Cowen, this is all about 'Global' Ireland, 'Rounding the troops' etc. And, to add to this, he is incapable of actually thinking independently outside some sort of consensus. So in policy-by-numbers, he needs websites with 30,000 ideas on them as a backing for his own existence.

Of course, Mr Cowen is also incapable of recognizing the fact that issuing such a bond will be equivalent to two admissions: (1) that Ireland Inc needs external funding; and (2) that we have no decency when it comes to standing on the corner with a hat out in hand begging anyone willing to toss us a dime.

You are right that debt burden repayments are up as well, and that this subtracts from taxpayer's income. But it should, in theory, not impact services provided by the state because to date there was no actual significant reduction in costs - only talk. If we were to stop raising taxes to plug the holes, in part created by rising taxes, we might get down to business of cutting over-spend and trying to protect vital services. But we are nowhere near this.

I am not an economist but another related question springs to mind.

If GDP contracts this year as projected by 6% presumably the real cost of the debt to be serviced will also increase relative to our GDP.

As an example I am thinking in terms of people who have had reductions in salary imposed on them.They now have less money to service a mortgage so therefore the percentage of their income given to the mortgage debt has increased.

If the above is true can you comment on consequences for the economy and government strategy in dealing with the problem.?

Sean, indeed, if GDP drops, our relative burden of debt services will rise. And you use an apt analogy, in my view. Just as a household will find it harder to fund mortgage repayments when the Government takes a larger chunk of its earnings comes next week and yes, the debt will rise, not only in relative to income terms, but also in absolute terms as more loans will be rolled over with accumulation of interest.

What can be done to alleviate this problem? Cut public spending and do not raise taxes. I would prefer actually to cut net spending down to, say, €35-37bn this year, which will imply we will have no borrowing needs in addition to what we already raised. And it will leave a cushion for dealing with the banks in the next round of a meltdown (when they report their losses for H1 2009). When that moment arrives, I would let the likes of Nationwide and other non-systemic banks fail, transferring their deposits and good loans to other banks and taking over their at risk loans into the 'bad bank' Anglo. The systemic banks will be recapitalized in an equity swap as I described before in Monday, January 26, 2009 post "Irish policy & rising jobs losses" and... I can't find an exact post, sorry - but I did write about the voucher-style nationalization or capital injection scheme before.

Thus we will have a chance to correct fiscal imbalances in a permanent fashion, to provide support for the financial sector, to minimise the adverse effects of moral hazard in banking and to help the households.

But then again, it is highly unlikely we will do any of this comes April 7th. I just remembered something that you might find amusing. On January 1 - in the first post for the year I said that "This will be a year of inversion of the traditional dictum: "What doesn't kill you, makes you stronger". Instead, the 2009 motto will be "What doesn't make you stronger will kill you"." Well, our Government's plans are certainly going to make us stronger...

Firstly, thank you for making an effort, to publicise the breadth and depth of the problems in government finance. The more air that we can give to common sense ideas the better.

I am not an economist, or an accountant, but I can read, and I understand a little about finance and figures, and the need to balance expenditure based on income, and avoiding debt for short term liabilities.

I agree that the biggest need is to get spending under control. Their income has dropped off the edge of the cliff. They were climbing up the cliff on the backs of construction industry, and that ladder has collapsed.

The problem IMO is twofold,
1)They (government) don't have the guts to sacrifice their future "elect-ability" by making tough decisions now.

2)The static layer of senior civil servants, who recommend policy, are not going to voluntarily recommend a 40% drop in salaries cost for themselves as a collective group, or to throw away their gold plated pensions.

So, for me the crux is, how do we, the citizens, clearly give the government a mandate to cut spending. (the same way we would personally cut our spending if our income halved overnight)

How do we raise enough support from joe-soaps, so the politicians feel OK in making the tough decisions.

FWIW, my father suggests that they will not make any real tough decisions until the elections this year are out of the way.