Some housekeeping: a handful of updates

A cleaning up of some of my emails provided for a digest of interesting updates on the topics already covered in other posts. Here is an attempt to combine these...

To the QNHS (here) and Live Register data (here):

Per Davy note: "The worst affected areas [of unemployment] are building and those service sectors related to construction and the global financial crisis. Construction employment slid 7.6% quarter-on-quarter, followed by hotels and restaurants (- 3.2%), retail/wholesale (-2.3%) and financial/business services (-1.9%). No pain-sharing is evident in the data: private sector employment dropped 97,400 over the last 12 months while public employment increased by 10,000."

Last night I was a guest on a Late Debate (RTE Radio 1) alongside a SIPTU rep who was clearly traveling in some parallel reality claiming that:Per point 1 - Davy note says it all, but an update on Exchequer results below also highlights the same.
Per point 2 - October Budget 2009 and its update, November Finance Bill II, both imposed progressively increasing Income Tax Levy on higher earners.
Per point 3 - two facts: (1) wage to value added ratio in Public Sectors (average) is ca 30% lower than in the Private Sector and some 1/3 lower than in the Financial and Business Services, and (2) wage to value added ratio in majority of public sector categories is close to or less than 1, so cutting 1 person out of the public sector would cost economy nothing (for ratio of 1) or would save economy some resources (for ratio is <1).
One caveat - of course, within Public Sector there are people who are highly contributive to the economy. For example: both IDA & Enterprise Ireland are aggregated into the above averages. These agencies have been significant contributors to the economic welfare in this country. Similarly, within each category, there is little understanding as to the variance of wage/ productivity ratios. E.g, do higher salaries in our flagship Universities relative to the second-tier third level institutions correspond to the productivity differentials? Knowing internal operations of Trinity, not exactly, but fairly closely. Thus, raising taxes in a 'proportionate' way as the Unions insist will hurt disproportionately more those who earn higher wages because of their higher productivity, even in the public sector.
Per Unions' 'Alternative Universe' - I got a general sense that our Unionists simply do not understand that in all instances, public sector workers depend for their wages on private sector earnings. Somehow, the Bearded Men of SIPTU/ICTU/CPSU/TGWU and the rest of the alphabet soup do not get the concept of who pays for what in this economy.

Per Exchequer Returns, February 2009 (here): there is significant evidence of deep wage cuts in private sector as income tax revenue continued to slide in January and February, despite the introduction of the income tax levy. In addition, current (non-capital) spending was up 3% y-o-y in February 2009. 2009 current spending is now on track to reach over 38% of Irish GNP - matching the record high achieved in 1983. Pure waste!

Financials and Other Stocks: as Davy puts it in a recent note: at the end of February 2009, the entire Irish Financial Sector accounted for only 3.5% of the Irish Stock Exchange capitalization as compared to 37.5% a year ago. This is diversification through attrition. The ISEQ dropped 10.3% in February - its sixth successive monthly decline. This was "the worst February performance in its 25-year history. It underperformed the FTSE Eurofirst 300 index, which also experienced its worst February performance, by 0.6%." A picture is worth a 1,000 words (all courtesy of Davy): 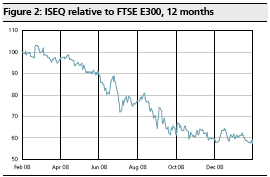 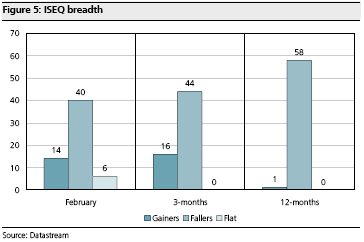 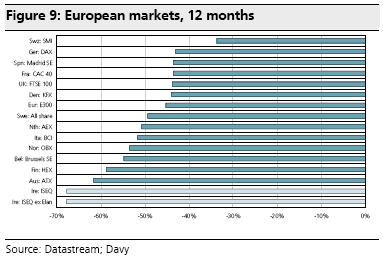 The last chart of course shows that Ireland is a absolute under-performer in its peer group. Davy do not analyse earnings in this context, but the above valuations are hardly making the shares cheaper. Earnings declines are now precipitous for all companies and my suspicion is that P/E ratios are falling. In other words, there is a question to be asked if there are any bargains out there given the earnings projections? 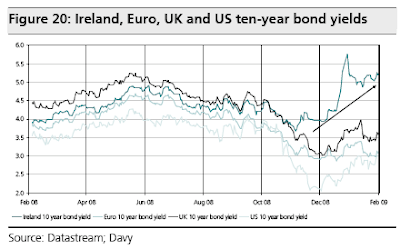 Lastly, Davy provide a good snapshot of the bond markets dynamics in the chart reproduced above. Spot the odd-one-out? Note the timing of our departure to the Club Med of Near-Insolvent States - bang on coincident with Mr Lenihan's Budget... This should be a warning to everyone who is desperate for this Government to do something about the crisis: doing 'something', as opposed to doing the right thing, will make matters worse. Clearly, the markets are not seeing higher taxes and a lack of spending cuts (Budget 2009) as 'doing the right thing'.

Mansergh Calls for 'Celtic Tiger' Fat Cubs to pay their share in the downturn: Mr Mansergh - Bertie's pet in the Dail and a Junior Minister in the Cabinet - called yesterday for the tax measures in the mini-budget to focus on making sure that those who benefited most during the Celtic Tiger era pay more in taxes. Great idea from the Grand Weasel of Irish Politics. How about we start with Mr Mansergh himself - a person whose ministerial salary is out of touch with reality, and whose pension benefits are so lavish, that some bankers would envy the returns on so few years of such a non-demanding work as that of a Junior Minister for State with responsibility for the Arts. Mansergh serves in the cabinet which, with exception of 3-5 Ministers, is remarkable for its inability to do its job at a basic level. Yet the cabinet is being paid more than its counterparts in the US, UK, EU15 or indeed anywhere else in the developed/ democratic world. So, be my guest, Mr Mansergh - pony up, say 50% of your own income - you and your colleagues and their senior public service underlings are the Fat Celtic Tiger Cubs.
Posted by TrueEconomics at 12:06 PM