Germany and the Euro

This post is a response to a comment by Tim (here):
"I just heard that Germany is considering leaving the euro. ...What do you think?"

I have not heard such a rumor - at least not at any credible level. I would be surprised if such sentiment was gaining significant strength in Germany. Here is the latest data I could find and my understanding of what is happening.

Also significantly, the decline in those trusting ECB has translated into an even higher rise in those who tend not to trust the ECB (as opposed to those who declined to answer): in Germany, 8 percentage increase in those who do not trust the ECB, in Spain +13%, in Ireland +10%, and so on. This shows that people are actually becoming more decisive in their negative position vis-a-vis ECB policies. But, again, it does not show Germans swinging decisively against the Euro membership. In my view, the rising negative perception of the ECB is driven by the policy lags with which the ECB greeted the economic crisis between July 2007 and July 2008.

As far as I understand, there was no direct question on the Euro in the preliminary EB70 results available at this time.

Eurobarometer 69, Spring 2008, does show results for trust in Euro itself. Even before the crisis pushed Germany into a recession, only 17% of Germans tended to claim that their approval of the Euro is one of the top two reasons for supporting the ECB. Same as in Ireland, but below the EU27 average of 19%. Table below gives results for "QA25a Which of the following are the main reasons for trusting the European Central Bank?": 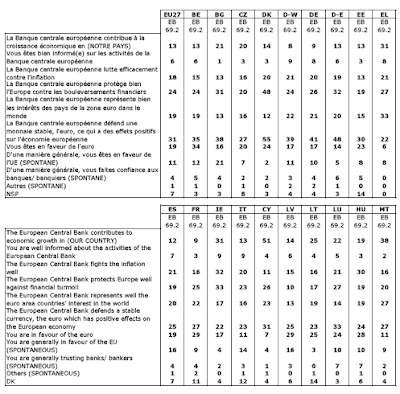 "QA26a Which of the following are the main reasons for not trusting the European Central Bank?" Table below shows response to the above question: 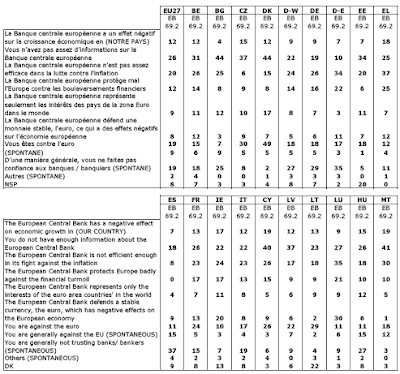 When it came to mistrusting the ECB, 18% of Germans named being against the Euro as one of the top two reasons for their position vis-à-vis the ECB.

These numbers do not show a significant doze of skepticism about the Euro amongst the Germans, but they do show that the two tails of the attitudes to Euro distribution are both ‘fat’ and virtually identical in size. In other words, anti-Euro enthusiasts are roughly as prevalent as Euro supporters in Germany. In Ireland, those mistrusting the ECB due to their dislike for the Euro are less numerous than those who support ECB because of the Euro.

It will be interesting to see, once full Eurobarometer 70 results are in, if there has been further erosion in support for the Euro. Most likely, given the current economic conditions, there would be a rising sense of pessimism. But I still doubt Germany will reach a swing point.

Needless to say, the implications of a German exit from the Euro would be disastrous for the global financial system and for Ireland in particular.

First there will be an effect of unwinding the Euro positions worldwide and a monumental mess of absorbing ex-Euro positions (assets and liabilities) into national currencies.

Second, there will be a logistical nightmare of reintroducing new exchange rates, as the original (EMU-entry point) exchange rates are no longer reflective of the actual economic conditions.

Third, there is a problem of divesting the ECB roles back to the national Central Banks and re-establishing these Central Banks' reputational capital.

Fourth, for countries like Ireland, indeed for the APIIGS, the end of the Euro would spell a massive and instantaneous devaluation. Imagine the trade flows and investment positions disruptions that would arise if the reintroduced 'punt' were to be devalued by ca 50% instantaneously.

Fifth, the Euro has become a part of the reserve currencies basket around the world. It is hard to see how the central monetary authorities around the world can unwind their Euro holdings in an orderly fashion in the current environment.

Sixth, the resulting crisis at the EU level - triggered by a removal of the fundamental pillar of EU expansionism and internal markets supports - will be of a magnitude equivalent to the current economic and financial crises combined. Amongst obvious economic implications, there will be a significant political cost of the tearing up of the entire fabric of the EU elite built on the singularly integrationsit agenda.

Fortunately, once again, I am not seeing any significant signs of the public opinion in Germany shifting decisively against the country membership in the Euro.
Posted by TrueEconomics at 10:02 PM