Here is an exclusive interview, Jean-Claude Trichet (ECB) gave to Foundation Robert Schuman. And here is my quick and dirty walk through its main points:

"Since the introduction of the euro on 1 January 1999, European citizens have enjoyed a level of price stability which had been achieved in only a few countries. This price stability directly benefits all European citizens, as it protects income and savings and helps to reduce borrowing costs, thereby promoting investment, job creation and lasting prosperity. The euro has been a factor in the dynamism of the European economy. It has enhanced price transparency, it has increased trade, and it has promoted economic and financial integration, not only within the euro area, but also globally."

Not really. Price stability in the eurozone has been pretty average - not as good as in Germany and several other countries over the years before the euro, similar to that in the UK, US and pretty much the rest of the developed world in the 2000-2008 period. A picture is worth a thousand words: since the adoption of the euro through mid 2008 (before deflation), inflation in the euroarea exceeded that in the non-euro EU states... 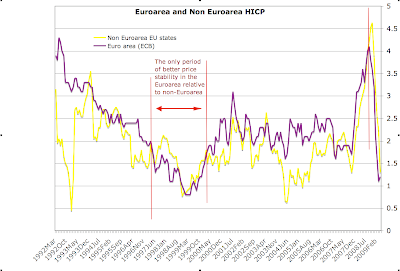 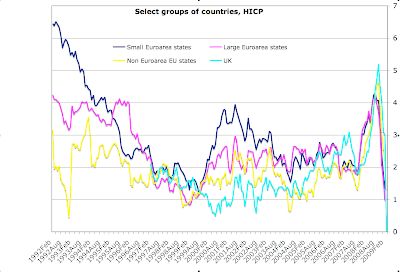 But it is in growth, dynamism and employment where the 10 years of the euro have recorded a very poor performance. I have already posted on this topic (here, here, and here). EU's growth rates since the early 1990s on have been sluggish (lagging behind the US and UK and only notching above a recessionary Japan). Euro area's unemployment remained well above the US, UK and almost all of the rest of the OECD. Eurozone's employment growth has been better than Japan's, but worse than any other OECD economy. So while the euro did enhance price transparency marginally, it did have very little real benefit in improving the quality of life for an average European. Not surprisingly, the euro is not enjoying a strong ride in terms of its democratic legitimacy (here).

"In recent months we have seen another benefit of the euro: the financial crisis has already demonstrated that... Would Europe have been able to act as swiftly, decisively and coherently if we had not had the single currency uniting us? Would we have been able to protect many separate national currencies from the fallout of the financial crisis? European authorities, parliaments, governments and central banks have shown that Europe is capable of taking decisions, even in the most difficult circumstances."

Again, largely untrue - as of today, there is no coherent eurozone-wide response to the crisis. The EU joint response to date is to issue a €5bn in stimulus, and this is yet to be disbursed. While the euro did protect some countries from a run on their currencies, it also boxed majority of eurozone's exporters into a corner of over-valued medium of exchange. Perhaps most importantly, lack of agreement between the European governments - exemplified in a series of failed summits since Autumn 2008 through today - shows unequivocally that "European authorities, parliaments, governments and central banks" are not "capable of taking decisions, even in the most difficult circumstances". The EU itself. this week, put the total size of its recession busting plans at between 3.3 and 4% of GDP, including welfare spending and yet to be specified and agreed measures. This is still short of the US plan to devote 5.5% of GDP to recovery efforts (source: here).

I agree with Mr Trichet that much-talked-about price increases in the wake of euro adoption have been small across the eurozone, but he is plain wrong in claiming that:

"With the benefit of hindsight, it has become clear that the Governing Council of the ECB ...took the correct decisions in order to guarantee price stability in the euro area in line with our mandate and as required by the Treaty establishing the European Community."

This statement is bordering on being offensive and arrogant. Mr Trichet is fully aware that his action of raising interest rates at the very end of the bubble has done too little too late to cool the markets. Similarly, his reckless increases in the interest rates in July-October 2008, as well as keeping the rates high in the first half of 2008 have spelled a disaster for the eurozone economies and also led to an overvaluation of the euro. His failure to act in July-August 2007 to lower rates was an act of mad denial of the unfolding credit crisis. Between July 2007 and September 2008, Mr Trichet stubbornly insisted that the credit crisis was not a problem for the eurozone.

"Since the outbreak of the financial turbulence in August 2007, the Governing Council of the ECB has taken unprecedented action in a timely and decisive manner." 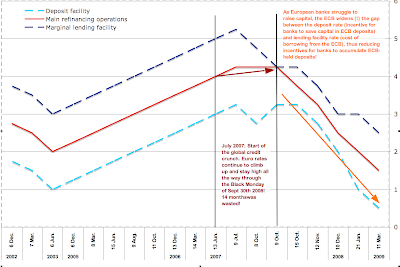 So nothing short of a failure above.

But what about rescuing troubled countries (APIIGS)? "...My response to questions of the type "What would happen if...?" is that I never comment on absurd hypotheses. I have confidence that the Member States will face up to their responsibilities, including with regard to fiscal policy." In other words, is the answer yes or is it no? Is this answer consistent with what Mr Lenihan told reporters about ECB's readiness to rescue Irish banking system (here)?

Overall, a pretty vacuous interview from a man who obviously has no way of re-assuring anyone that he can handle the current economic crisis in the eurozone. A bit more competent than our Brian^2+Mary partial-indifferential-equation, but a lot less competent than, say, the US Fed&Treasury gang.
Posted by TrueEconomics at 11:14 PM