Time to worry is… about now… or rather in a couple of months...

Irish residential properties price index for July was released by CSO. The data is showing continued established trends in prices recovery with further amplification in the worrying trends of double-digit y/y increases in Dublin property prices. While I generally prefer to provide more detailed analysis on a quarterly data, which will be available at the end of October, the current rates of increases in prices are now worrying and deserve at least a brief comment.

Overall, National Residential Prices Index rose to 75.3 in July 2014, which is up 13.4% y/y. July marks third consecutive month of double-digit y/y increases in prices. And the rate of increases is accelerating for the fourth consecutive month. This is worrying. The level of index remains low - 42.3% off its pre-crisis peak and only 17.47% up on crisis trough. But cumulated 24 months gain is now 16.0% (an annualised rate of increases at 7.71%). Thus, as I noted before, the main concern is not the level of prices, yet, but the the rate at which prices are moving up.

Furthermore, the rate of price increases in the Apartments segment of the market is clearly outstripping price increases for houses in all months since June 2013, with exception of February 2014. This too is worrying as this suggests investment motives buying acting strongly to push prices up for rental properties. The result will likely be misallocation of investment and rising rents. 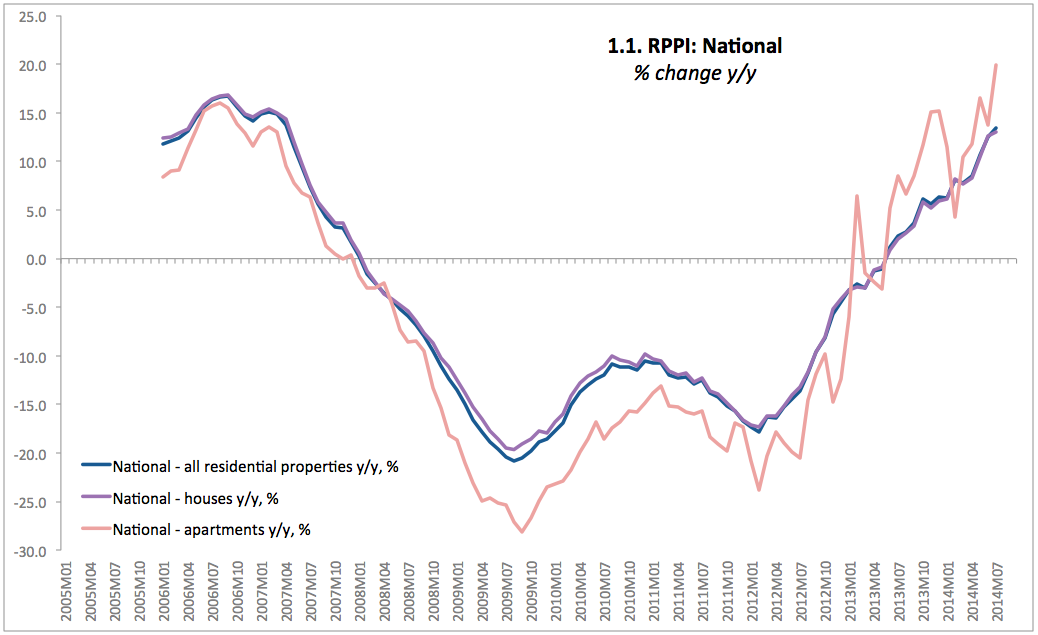 In Dublin, the growth rates are even of greater concern.

Once again, levels are not a problem: Dublin residential properties index currently sits at 76.6 which is 43.5% lower than pre-crisis peak and 33.68% higher than crisis period trough. Dublin fell hardest and fastest of all markets in Ireland during the crisis, so it is bouncing back now faster too. So much is fine. But the rates of increase in prices y/y are now running at double digits for 12 consecutive months in a row, with last three months the rates of prices increases in Dublin at above 21 percent. sooner or later it will be time to call this a 'feeding frenzy' and if the credit supply to the sector were to improve, all stops will be pulled out of the buyers. Psychology here is not pretty. 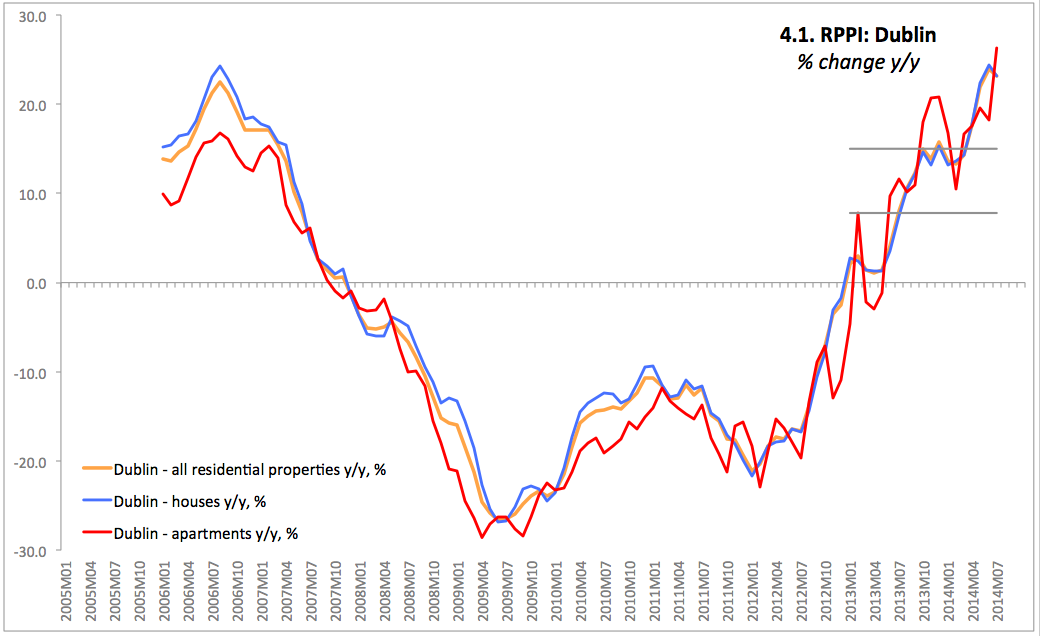 So is it 'finally' time to call this a bubble? Not yet. I will make my next call on this on foot of September data (due in October), but in general, the levels of prices are still benign compared to pre-crisis peaks, pre-bubble trends and the 'natural rate' of price increases that can be expected to prevail from the 1990s on. But I am beginning to worry that a combination of:


are all adding up to a rising pressure on the investors and buyers to go into the market to secure 'any' deal at 'any' valuation as long as it is remotely affordable.

This is not a 'champagne cork' moment, yet, but we have lots of foam in this market, with little to slow down the cork for the moment...
Posted by TrueEconomics at 12:31 PM